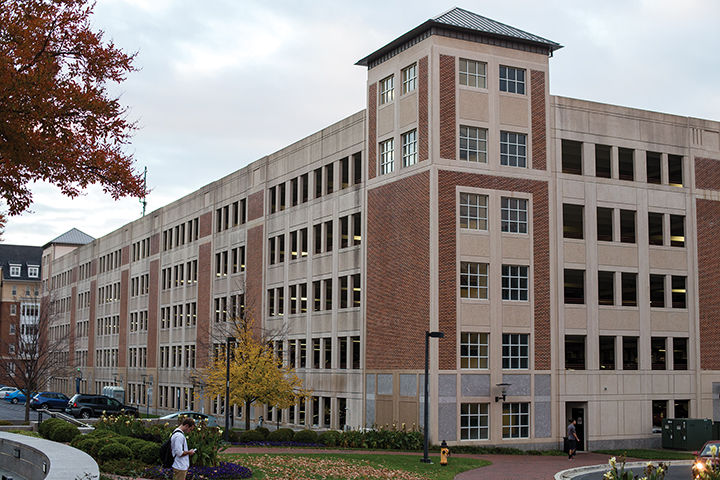 Mowatt Lane Garage is located between Van Munching Hall and the Commons apartment complexes, and could have solar panels added to its roof.

Mowatt Lane Garage is located between Van Munching Hall and the Commons apartment complexes, and could have solar panels added to its roof.

The university plans to put about 7,000 solar panels, enough to power more than 218 average U.S. homes for a year, on the roofs of three parking garages, a move that would bring more clean energy to the campus, officials said.

These additional renewable energy sources, which are part of an agreement between the university and a yet-to-be-decided third party, will produce up to two megawatts of clean electricity for the campus grid by December 2016, said Mary-Ann Ibeziako, director of Facilities Management’s Department of Engineering and Energy.

“We would agree to purchase power from [the third party] at a set cost,” Ibeziako said. “The amount that we are paying for the agreement is actually saving us $1.1 million over the 20-year life cycle.”

The third party will pay for solar panels to be placed on the roofs of Terrapin Trail Garage, Regents Drive Garage and Mowatt Lane Garage — none of which will lose any parking spots in the process, said David Allen, director of the Department of Transportation Services.

In fact, the solar panels will shield cars from the sun, Allen said, as a metal grid-like support system will hold the panels in place above parking spots.

To cover the cost for the support grid, which the third party will not cover, the university recently applied for a $250,000 grant from the Maryland Energy Administration, said Mark Stewart, senior project manager in the Office of Sustainability.

University officials will know in mid-May whether they received the energy grant, Stewart said.

Officials chose the garages because they will not be touched within the next 20 years, despite major cutbacks to student parking in the next few years, Stewart said.

Some of the produced energy will power the lights and charging stations for electric vehicles inside the garages, but most of it will enter the local grid as clean energy, Allen said.

The push toward renewable energy comes after this winter’s freezing temperatures caused several weeks of overtime production at the cogeneration power plant on Route 1, Ibeziako said. The power plant, along with some other sources, satisfies much of the campus’s energy demand.

Despite the increase in heat production this past winter, officials plan for 60 to 70 percent of the university’s electricity to come from renewable resources by the end of this year, Ibeziako said.

But the President’s Energy Initiatives call for a full 100 percent to come from renewable resources by 2020.

This campus already pulls energy from three solar panel farms, Ibeziako said, one of which is the 2,632-panel Severn Building Solar Array about a mile from the campus.

The Severn solar panels produce 792 megawatt-hours each year, which is much smaller than what is expected from the garage solar panels, Stewart said.

The solar panels will help support the campus’s 5 percent energy demand growth as building capacity has increased 10 percent over the past few years, Ibeziako said.

Though these plans require swift action over the next 12 to 18 months, the Board of Regents still needs to approve the project.

Wind- and solar-produced energy are limited by factors as simple as the weather. It is not always windy enough to provide reliable energy, and the sun sometimes does not come out — especially in the winter, when energy demand is much higher.

“To meet the base demand that we have would require a tremendous amount of wind and solar power,” Stewart said. “There are some aspects and drawbacks to going all solar and all wind; it just really needs to be balanced.”

In conjunction with student organizations, university officials are hoping to begin a behavior-based campaign to address lights being left on, thermostats turned to high and water overuse on the campus.

“We are launching a behavioral campaign, which will be the biggest game-changer to keep things static,” Ibeziako said. “[It is] one of the things we can control because one of the cleanest energies is the energy that never had to be produced.”