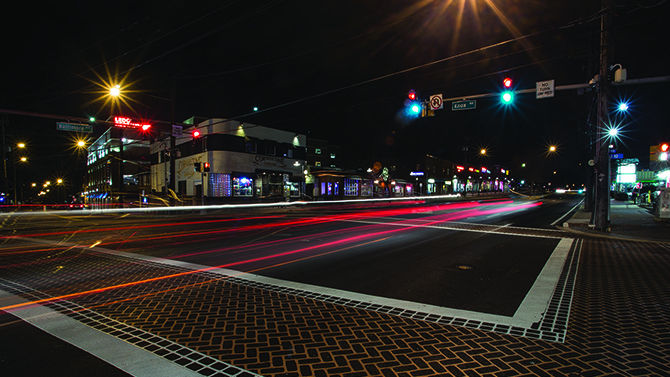 District 1 Councilman Fazlul Kabir said city officials informally discussed options to improve safety on Route 1 via email this weekend. The letter to the SHA is “the beginning of a dialogue” and an initial step toward improving pedestrian safety, College Park Mayor Andy Fellows said.

The letter recommends reducing the speed limit from 30 mph to 25 mph between Berwyn and Guilford roads, having an automatic walk signal when the button is pressed and installing stronger lighting along the road.

Existing speed cameras on Route 1 operate until 8 p.m. Monday through Friday and do not operate on Saturdays and Sundays, city manager Joe Nagro said. Councilmembers said they want to explore the possibility of operating the speed cameras at all hours.

College Park City Council student liaison Catherine McGrath said improving pedestrian safety has become a concern for many students. George Washington University senior Carlos Pacanins died of injuries after he was hit by a car when crossing Route 1 near the Knox Road intersection Friday night, university senior kinesiology major Cory Hubbard was killed in a January hit-and-run near the intersection and a car struck a 54-year-old man crossing the intersection in July.

“This [letter] is definitely called for. I know that a lot of students have been talking about this recently,” McGrath said. “Students are starting to become more angry about this than they have been before.”

A greater police presence on Route 1 and an educational safety campaign for residents and students were also discussed at last night’s meeting. Sophomore theatre major Hannah Syverson said these measures would benefit students.

“Educate kids, make them aware of all the deaths that are happening,” Syverson said. “Students our age, they think they are invincible. But when something happens like this, they realize they’re not.”

District 3 Councilman Robert Day said while he was walking around downtown Route 1 Friday night, he noticed people seemed to be “making a game out of crossing Route 1 at a dangerous time and in a dangerous way.”

Building fences across street medians — an idea the council did not include in its letter to the SHA — could help prevent jaywalking and future pedestrian accidents, Kabir said. Neighboring city Takoma Park adopted similar measures on University Boulevard.

A fence in the median of certain stretches of Route 1 might relocate the jaywalking issue to another section of the road, District 2 Councilman P.J. Brennan said. The city should look at safety improvements in the “context of culture change,” he said.

“It’s about implementing comprehensive ideas like what SHA is exploring right now and to continue to do that as our city evolves,” Brennan said. “It’s really hard to prepare for the rapid change that this city’s going through, and it’s really tragic that we have to learn some of our lessons this way.”

With the development of the Maryland Book Exchange underway, Kabir said pedestrian safety may become a larger issue and the council must be proactive in addressing this problem.

Because Route 1 is a state-owned highway, the SHA must approve any City Council plans. However, councilmembers said they hope to make small changes to side streets, such as adding a crosswalk between 7-Eleven and Jason’s Deli.

“We want to make sure [SHA] are emphasizing and aware of pedestrian fatalities and direct strategies to mitigate that,” Brennan said.