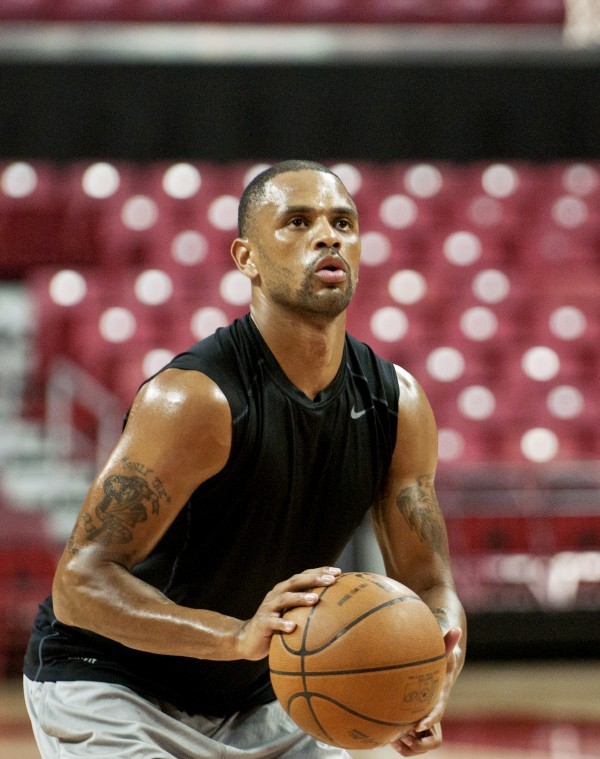 Juan Dixon, who helped lead the Terps’ basketball team to its first and only national title in 2002 and played in the NBA for eight years, is training with the university’s athletic staff in hopes of playing professionally in the U.S. again. He said he had to experience a rash of setbacks before fully appreciating the game.

Juan Dixon, who helped lead the Terps’ basketball team to its first and only national title in 2002 and played in the NBA for eight years, is training with the university’s athletic staff in hopes of playing professionally in the U.S. again. He said he had to experience a rash of setbacks before fully appreciating the game.

The Terrapins men’s basketball icon had just spent the past 20 minutes discussing life after College Park. He had touched upon a failed drug test, the ups and downs of playing abroad and the NBA comeback attempt that ultimately landed him alongside the newest generation of Terps.

Then he paused. A slight smile began to form on the 34-year-old shooting guard’s face as he glanced at the rafters above him.

“That’s possible,” Dixon said as he pointed at the 2002 national championship banner. “The reality is, not everybody can make it to the NBA. But that banner, that’s possible. Everybody on the team just has to know their role.”

Much has changed for Dixon since he cemented his place in Terps history as the first — and so far, only — player to lead his hoops teammates to the program’s lone national title. He has two young sons, Corey and Carter. He is divorced and now shares his days with a woman he calls the “love of my life.” He is no longer the immature 23-year-old who often took his fame and talents for granted.

After an eight-year NBA career and a European voyage that spanned three professional teams, Dixon has returned to the city humbled and motivated. He is training daily with the Terps’ staff in hopes of restarting his NBA career, using the untapped potential he believes is still remaining in his 6-foot-3 frame.

“He’s different now,” said Cris Sanchez, Dixon’s longtime girlfriend and sole support system during his more than two-year trek through Europe. “You can see it in his eyes, in the way he goes about his business. He really wants it.”

Getting to that point was no easy feat. He had to experience a rash of setbacks. Only then, Dixon said, could he fully appreciate the game and everything it meant to his life.

The first blow arrived in October 2009. The Atlanta Hawks cut him days before their season opener, ending Dixon’s chance of catching on with his fifth team in as many years. With few other options, Dixon signed with Greek club Aris Thessaloniki.

Desperate for someone to help him navigate foreign waters, Dixon asked friends and relatives to make the move with him. But they had families and jobs they couldn’t leave behind.

So Dixon asked Sanchez, whom he had only met a few months earlier and who had an adolescent son of her own. After careful consideration, Sanchez left her job running two restaurants and traveled to Thessaloniki with Dixon.

“You would think that because he’s Juan Dixon, he has a lot of support and people, which he does,” Sanchez said. “But on the same token, he’s a loner. I wasn’t going to leave him by himself.”

Greece was trying. The valet parking and gourmet buffets Dixon had grown accustomed to after almost a decade in the NBA were nowhere to be found. Opposing fans threw firecrackers at him during games. Security was minimal. The coach didn’t run an offense Dixon felt fit his skill set.

So he left after less than two months and flew back home to Baltimore with Sanchez. A week later, his agent called. A team in Spain, Unicaja Málaga, was interested in his services.

At first, life in Málaga felt like a dream. The team provided Dixon and Sanchez an apartment overlooking the Mediterranean Sea. Dixon emerged as a Euroleague star, averaging about 18 points per game. The couple went on regular excursions through the quaint neighboring towns. It wasn’t the NBA, sure, but it worked.

That is, until Dixon received the letter that changed his life.

“Everything was perfect in Spain,” Sanchez said. “And then he got suspended.”

The news seemed surreal. Dixon had allegedly tested positive for steroids three months earlier in Greece. The International Basketball Federation, FIBA, was suspending him for a year.

It didn’t make sense, Dixon thought. How could he be suspended when, he said, he had never taken steroids before? The only possible explanation he could fathom was that one of the vitamins or over-the-counter muscle supplements he was taking contained an ingredient that showed up on the test.

The year suspension from playing stripped him of one of the few things in his life that gives him a sense of peace, an outlet from the stresses of adulthood that also happened to pay his bills.

Dixon returned to this state and waited out the suspension. He trained daily, desperate to find a way back to the hardwood. When he regained his eligibility in February 2011, his agent’s phone rang again. It was a Turkish team. It had just lost its starting off guard to an injury and wanted to finish out the season with Dixon manning the backcourt.

Then “the nightmare,” as Dixon loathingly calls it, began.

When the couple arrived in their new apartment in Bandirma, Turkey, a city of about 100,000 in the country’s northwest corner, Dixon sat on the couch and broke down.

Dixon felt isolated and alone. Hardly anyone in Turkey spoke a word of English. Their house was a two-hour commute from the nearest mall. Dixon and Sanchez had to finagle their way onto a ferry if they wanted to visit a nice restaurant.

Basketball and Sanchez’s support kept Dixon sane during those first weeks. When he stepped on the court, he felt calm. When he returned home, Sanchez often had a bag of cheeseburgers and an American movie cued up in the DVD player — something to make him feel at home.

And then he got injured. Dixon’s left knee began swelling, and he thought the team doctors misdiagnosed the injury, Sanchez said. He was forced to struggle through the final weeks of the season on the bench before he could head back to the United States for surgery.

Dixon struggled to grapple with his new reality. He was away from his 2- and 3-year-old sons with little to do besides reflect on his plight.

Sometimes he’d fall asleep crying. He’d wake up, and Sanchez would be cleaning the apartment, doing the little things to make a trying time more bearable.

“I don’t think I would’ve been able to survive three months in Turkey by myself,” Dixon said. “And that doesn’t make me any less of a man. [Sanchez] has really just been a bright spot in my life.”

That support has helped him do far more than just survive, however. It has allowed him to see life in a different light.

Since returning to the United States, Dixon has spent much of his time pondering life’s biggest questions with Sanchez: What really matters? Why am I here?

He still doesn’t feel like he has a full grasp on the answers. What he does know, though, is he’s getting closer to finding them.

Every weekday, Dixon slaps his alarm clock at 5:45 a.m., makes the 45-minute drive from his Baltimore home and arrives at Comcast Center at 7. He then goes to physical therapy with Megan Rogers, the women’s basketball athletic trainer, rehabbing the bum knee that sidelined him last year.

From there, he runs through a litany of drills with David Adkins, the women’s basketball assistant coach, before finishing off the morning with weight training. Dixon usually leaves Comcast at about noon, ready to focus on a host of other endeavors — business opportunities, charity work, fatherhood.

Instead, he thinks about what resuming his playing career would mean to him on a personal level. He’d have the means to give back to the drug-ridden neighborhood where he developed his toughness. He wouldn’t ever need to fret over providing for his family. He’d have the opportunity to show coaches and executives he’s no longer an immature 20-something, that he finally understands what it means to be a first-class professional.

But what if he doesn’t make it back to the NBA? What if no franchise is willing to take a chance on a former bench player a year removed from meniscus surgery?

He said he’ll be fine knowing he gave it his all. After a decade of highs and lows, Dixon has learned perspective. He realizes there’s only so much in life he can control. There’s no sense in letting others define his success or allowing them to take away his joy.

“A lot has happened,” Dixon said. “Everybody wants to know what Juan Dixon is doing. Juan Dixon is learning how to become a man.”

Dixon has shared some of that wisdom with coach Mark Turgeon’s Terps in recent weeks. He told them that they should be sleeping in the locker room and shooting jumpers whenever they get the chance. He told them to ignore the host of distractions that plague major Division-I athletes — the girls, the parties, the alcohol — and to concentrate on learning how they can contribute to the team. He told them to appreciate their time in college because it’s limited.

And if they do all that, Dixon said, the Terps can be special. Who knows? Maybe they’ll add a banner to those rafters.

“He took Maryland to the top, so he knows what it takes to get there,” Turgeon said. “He’s just been hanging out with the guys, talking to them and it’s been good. It’s been a really, really good thing for our guys.”