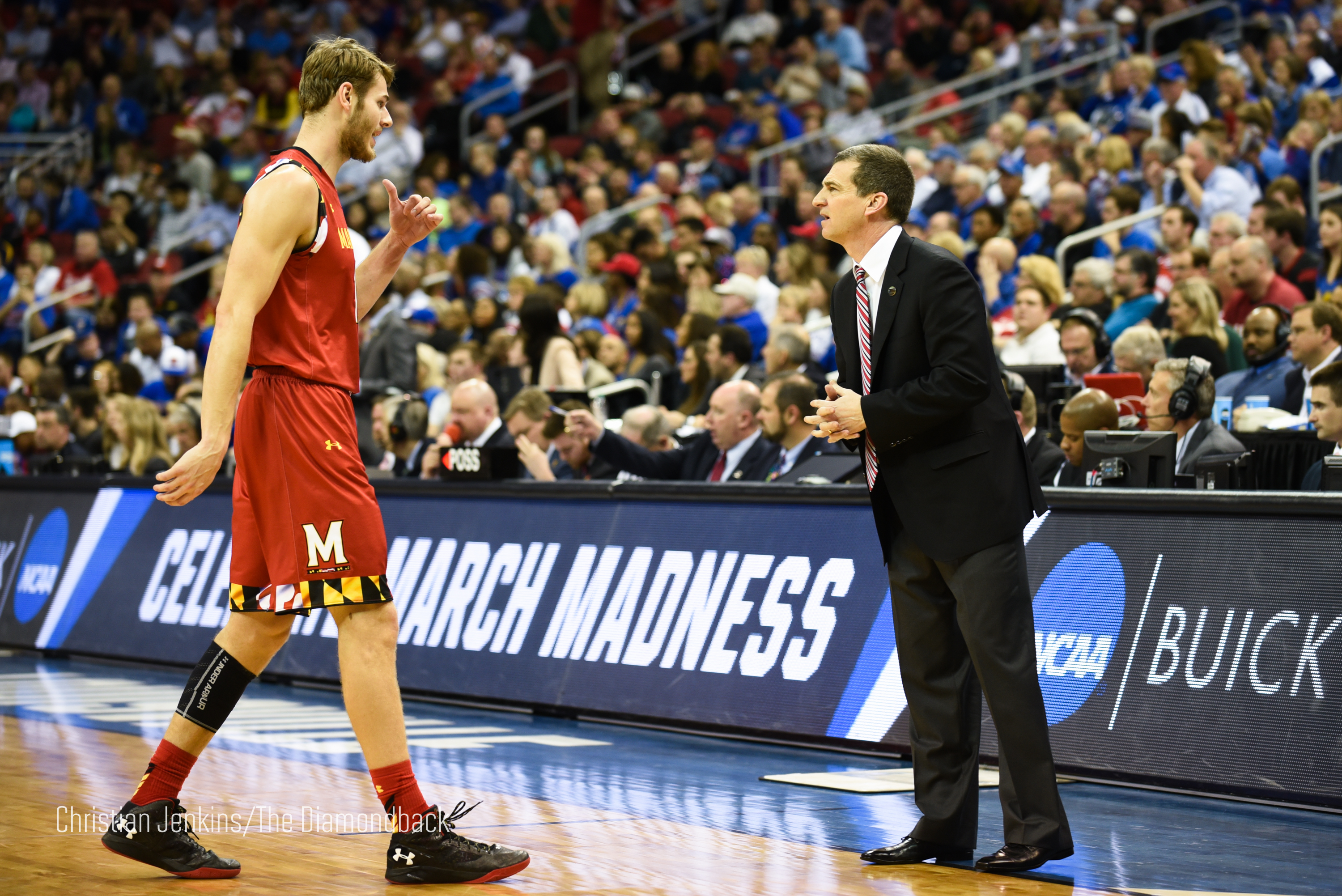 Forward Jake Layman and coach Mark Turgeon talk in between play when the Terps lost to Kansas, 79-63, in the Sweet Sixteen at the KFC Yum! Center on Mar. 24, 2016. (Christian Jenkins/The Diamondback)

LOUISVILLE, KENTUCKY — Jaylen Brantley sat at his locker with a towel completely covering his face after the Terrapins men’s basketball team’s season-ending loss Thursday. As Rasheed Sulaimon stood and talked with the media, the red splotches under his eyes from tears shed minutes earlier still lingered.

But senior forward Jake Layman, whose college career came to an end with the Sweet Sixteen defeat, said he was smiling when he walked into the locker room. The 79-63 loss to Kansas stung, but he was happy to see how far the program had come in his four seasons.

That’s how he’ll remember his Terps career. Not by what happened Thursday night at the KFC Yum! Center.

“I just look back and think of how proud I am of every player that’s come through here the past four years and how hard they’ve worked to get this program back to where it needs to be,” Layman said.

When the lanky freshman arrived on campus in 2012, he was joining a team coming off a 17-15 season. Coach Mark Turgeon was in his second year, still trying to revitalize a program that was used to being in the national spotlight under former coach Gary Williams.

Layman wouldn’t get his first taste of the NCAA Tournament until his junior season, and even that came as a surprise. The previous season, the Terps had stumbled to another 17-15 finish. Five rotational players gave up on the program and transferred elsewhere.

The Wrentham, Massachusetts, native could’ve joined them, three of whom were his roommates. But he stuck it out in College Park.

Even though his career came to halt a weekend earlier than Terps fans hoped, Layman leaves the program tied with Juan Dixon for the most games ever played in a Terps uniform (141).

With 141 outings in a Terps uniform, Jake Layman is tied for first in games played with Juan Dixon. (Graphic by Evan Berkowitz/The Diamondback)

Layman admitted it hadn’t really hit home that his Terps career was over as he walked off the court for the final time Thursday.

“It was a weird feeling,” Layman said. “I don’t want to believe it’s over yet. It hasn’t really sunk in yet.”

Still, the fact that his final college game came in a Sweet Sixteen bout meant so much.

Layman helped bring basketball back to prominence in College Park in his four years. After two seasons without an NCAA Tournament appearance, the Terps reached the Big Dance the past two years, winning three games total.

“I [am] so happy, not for just this team, but this program this past four years,” Layman said. “It makes me so proud to be a part of it.”

When the Terps take the court next November, Layman won’t be running out of the tunnel in Xfinity Center with them for the first time since 2012. There’s a chance none of the usual starters from this year will be there either.

But Layman’s impact will remain — on the court and off it.

“Jake was definitely one of my closest guys,” freshman guard Andrew Terrell said, fighting back tears. “I’m going to miss him. … All the seniors, they taught me a lot.”