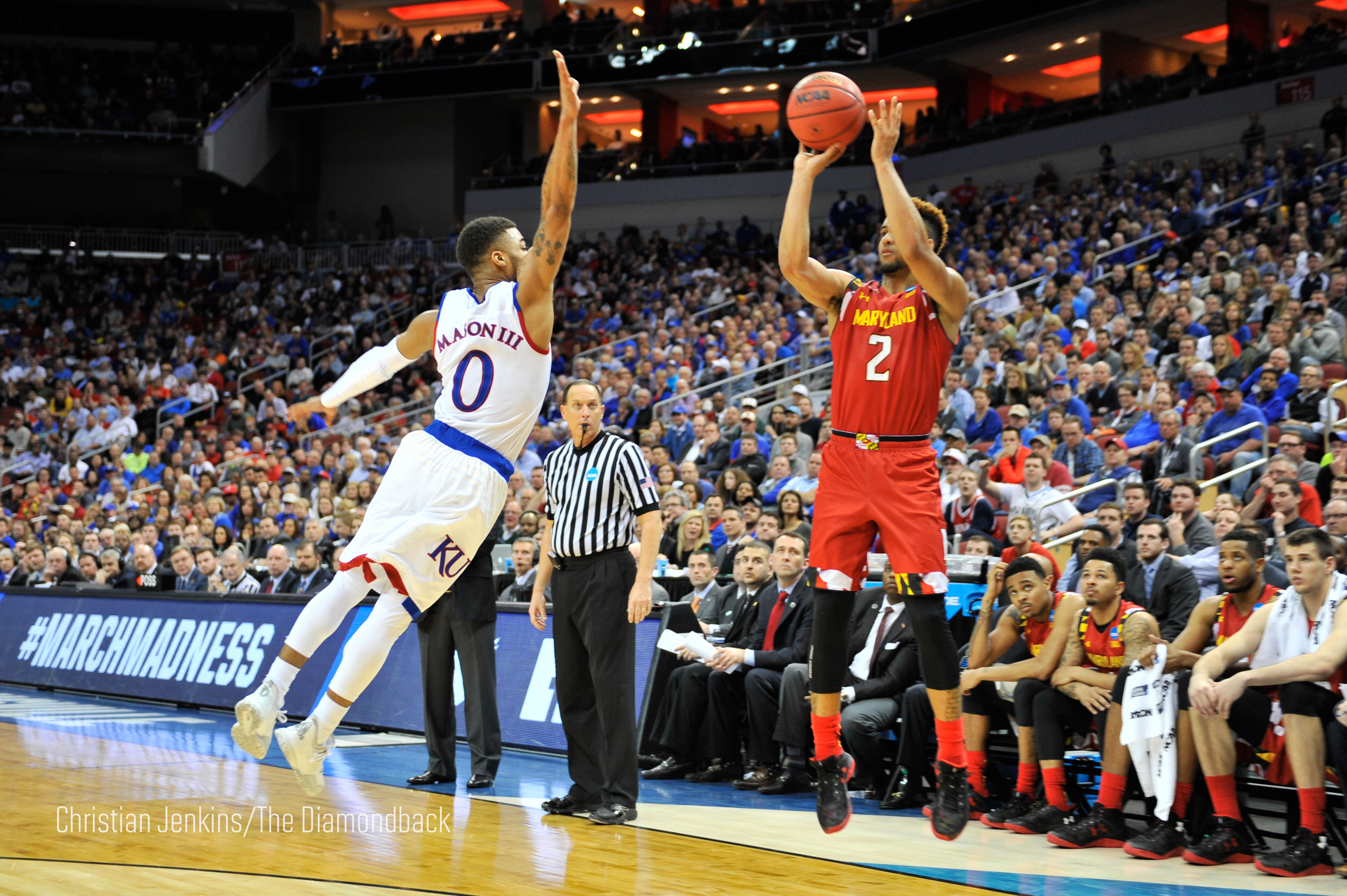 Guard Melo Trimble releases a 3-point shot when the Terps lost to Kansas, 79-63, in the Sweet Sixteen at the KFC Yum! Center on Mar. 24, 2016. (Christian Jenkins/The Diamondback)

LOUISVILLE, KENTUCKY — Melo Trimble slammed his hand onto the hardwood at KFC Yum! Center. The Terrapins men’s basketball guard then took an extra second to lay underneath the basket before he gathered himself in Thursday’s Sweet Sixteen game.

The end of the season — and perhaps his college career — was 5 minutes and 8 seconds away. He seemed to know it.

Sure enough, Trimble untucked his red Terps jersey minutes later as he walked to the bench after the final buzzer sounded on the 79-63 loss to No. 1-seed Kansas. The sophomore interlocked his fingers on top his head before dropping it as he neared his teammates. When he finally disappeared into the tunnel after the postgame handshake, his head was down.

For the second consecutive postseason tournament, Trimble’s shot was off in a game the Terps needed their star to lead them. After going 2-for-15 in the Terps’ Big Ten semifinals loss March 12, Trimble went 5-for-16 from the floor and 1-for-7 from deep against the Jayhawks, the No. 1 overall seed.

“Missing shots just happens to the best of us,” Trimble said. “It’s been like that all season for me. But it is what it is. I had great looks.”

After a rookie campaign that earned him the Big Ten Preseason Player of the Year honor before the season, Trimble struggled to resemble his freshman year self. He experienced a dip in his scoring, but more noticeably, his three-point shot went awry.

Trimble shot 41.2 percent from deep last season, but ended this year shooting just 31.5 percent from beyond the arc. The wayward shots were glaring Thursday with Trimble missing the hoop entirely once on a fallaway 3-pointer.

“I was left open three times,” Trimble said. “I’m supposed to take advantage of that and make the shots. I just didn’t make the shot.”

While the Upper Marlboro native missed all three three-point attempts in the first half, he found success driving into the lane early. He finished the first 20 minutes with 10 points on 4-for-7 shooting inside the arc.

But Kansas’ backcourt adjusted to the shifty guard after the break.

“He got downhill a couple times and got his layups and stuff, but in the second half he just couldn’t do that,” forward Damonte Dodd said. “They were pressuring him too hard.”

Trimble was 1-for-6 from the floor in the second half.

“It was real tough to see him go through it,” Dodd added.

Coach Mark Turgeon complemented the Jayhawks’ trio of starting guards, singling out Devonte’ Graham and Frank Mason III for their ability to stick with Trimble.

“Those two little guards are quick,” Turgeon said. “They were terrific with that.”

Trimble, though, shouldered the blame rather than talk about what Kansas did to thwart him.

He’s maintained all season he’s a confident shooter. Trimble said after the loss Thursday that one missed shot doesn’t mean he’s not going to pull the trigger on the next. And even as the deep balls bounced off the rim — or missed entirely — he kept firing. They simply wouldn’t go.

So after the game, Trimble was left trying to answer reporters’ questions of what went wrong. One question, in particular, had come three games too soon.

What does his future hold?

“I haven’t thought about that,” Trimble said.