TERPS GAMEDAY: No. 5-seed Maryland vs. No. 1-seed Kansas 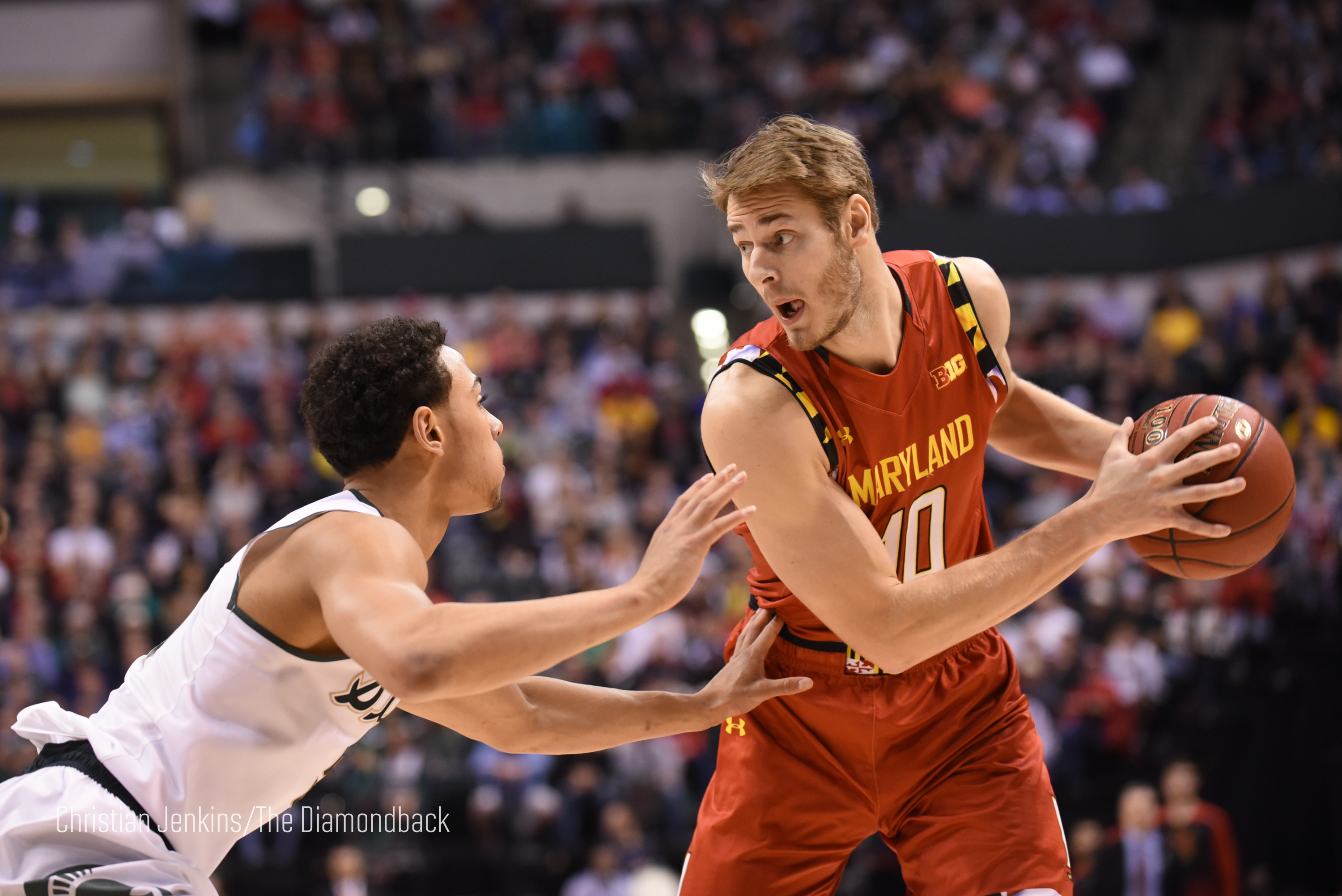 Forward Jake Layman protects the ball from an opponent when the Terps lost to Michigan State, 61-64, in the Big Ten semifinals at Bankers Life Fieldhouse in Indianapolis on Mar. 12, 2016. (Christian Jenkins/The Diamondback)

Momentum: The No. 5-seed Terps used a 14-0 run in the second half to pull away from No. 13-seed Hawaii on Sunday to secure the program’s first Sweet Sixteen appearance in 13 years. But a third straight win in the NCAA Tournament will likely be much tougher to come by than the first two. The Terps will have to get past the tournament’s No. 1 overall seed in Kansas. The Jayhawks have won 16 straight games, with their last loss coming Jan. 25. Kansas won its first two games of the tournament by an average of 19 points.

Forward Jake Layman cooled off some against Hawaii, but he’s been on a tear since late February. He hit 25 of his last 41 long balls before going 0-for-4 from deep Sunday. Still, the senior managed to shoot 50 percent from the floor and finish with 10 points. As important as his offensive success will be tonight, perhaps his defense will be even more crucial. The 6-foot-9 wing could match up with Kansas’ leading scorer, Perry Ellis, at times during the game.

Guard Melo Trimble averaged 21.5 points over the first two games of the NCAA Tournament in large part due to his success getting to the line. He went 22-for-23 at the charity stripe in the two contests, matching the most trips he’s had to the line in a two-game stretch this season. As the Terps leading scorer and floor general, the sophomore star is vital to the Terps’ success against Kansas. If the Sweet Sixteen comes down to the last shot, you can bet Trimble will be the one taking it.

Forward Perry Ellis is the heart and soul of Kansas. The senior leads the team with 16.9 points per game while also pulling down 5.9 rebounds per contest. The 6-foot-8 forward has been dominant lately, scoring at least 20 points in six of Kansas’ past seven games — five of which came in postseason play. If the Terps want to upset the Jayhawks, containing Ellis is a must.

Guard Wayne Selden Jr. can light up the scoreboard in a number of ways for Kansas. He leads the team in made 3-pointers, but he’s also dangerous driving to the basket. The 6-foot-5 junior dominated Kentucky earlier in the season, pouring in 33 points. Selden turned in a great performance in Kansas’ Round of 32 win, too, finishing with 22 points, seven rebounds and three assists.

Terps guard Rasheed Sulaimon: “Being a part of the NCAA Tournament is a once-in-a-lifetime thing, so we’re just enjoying every part of it.”

141 games: When he steps onto the floor tonight, Jake Layman will tie former guard Juan Dixon for the most appearances in program history.

59 days: The number of days since Kansas suffered its last loss, an 85-72 defeat at Iowa State.

82 points: Kansas averages per game, which ranks 15th best in the country.

Phillip Suitts: Kansas 76, Terps 70. Behind a stellar performance from Layman, the Terps keep it close, but the Jayhawks pull away in the final minutes.

Josh Needelman: Terps 70, Kansas 66. The Terps put together their best game of the year and deliver the biggest win of coach Mark Turgeon’s career.

Ryan Baillargeon: Kansas 79, Terps 72. The Terps hang with the tournament’s top team but can’t hit big shots down the stretch.

NEEDELMAN: Maryland didn’t expect to be an underdog, but that’s what it is entering Sweet Sixteen

Rasheed Sulaimon and Andrew Terrell’s ‘Where my dogs at?’ chant becoming tradition