UMD researchers showcase the applications of virtual and augmented reality 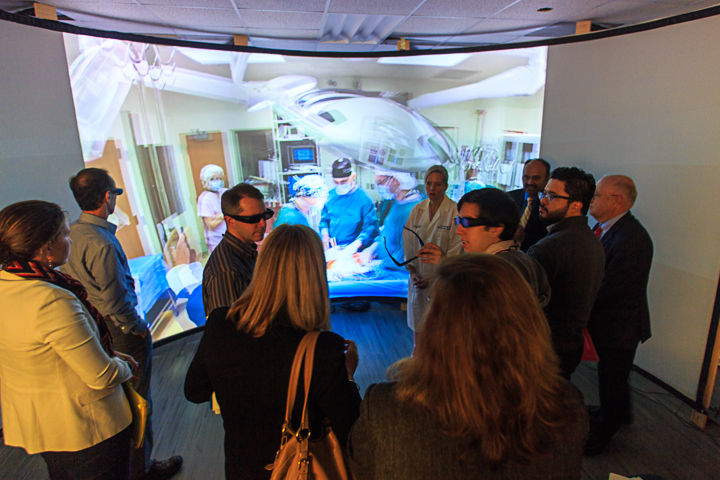 Dr. Sarah Murthi speaks about the capabilities of augmented reality technology and its various uses in the operating room.

Dr. Sarah Murthi speaks about the capabilities of augmented reality technology and its various uses in the operating room.

Someday soon, doctors could be practicing surgery on virtual bodies without actually working on the real thing. Students could feel what it’s like to walk on the moon while still in the classroom. Anyone could experience the sights and sounds of Times Square just by putting on some goggles and headphones.

Such advances could be possible through innovations in virtual and augmented reality technology, and computer science professor Amitabh Varshney said this university is at the forefront of this emerging field.

At a presentation in the Virtual and Augmented Reality Laboratory, or “Augmentarium,” in the A.V. Williams Building yesterday morning, researchers showcased their work that demonstrates virtual and augmented reality uses in security, combat, health care, education and consumerism.

“We are really making strides in virtual and augmented reality … and opening up new windows of opportunity,” said Varshney, director of the University of Maryland Institute for Advanced Computer Studies.

The potential applications for virtual and augmented reality are seemingly endless, Varshney said. These technologies could be used in everything from helping connect names with faces during a party to providing soldiers with constant data on the health and ammunition of allies or on unseen threats on the battlefield.

“This could really simplify how we process information in real-time critical situations,” Varshney said.

For military and consumer-related uses, which Varshney presented on, augmented reality glasses could be used to sort through options at a grocery store with ease, providing readouts of a cereal’s sugar or gluten content in the shopper’s field of view.

Another use for augmented reality glasses could be found in medicine, said Dr. Sarah Murthi, a trauma surgeon at the R Adams Cowley Shock Trauma Center in Baltimore and clinical associate professor at the University of Maryland School of Medicine. Virtual reality could be used to simulate surgical situations and give physicians hands-on training and practice before they have to operate on a patient, she said.

READ MORE: Math, computer science departments at UMD to get $6 million in funding

“This can help someone experience something before they do it … and help physicians keep up their skills over time,” Murthi said. Virtual and augmented reality “could fundamentally change how we train physicians, but also how you interact with your doctor.”

Doctors could no longer need to look at a computer while they are talking to a patient or break the stream of a surgery to look up at a monitor in the operating room, she said. All of the necessary information could be available through the glasses, so doctors could continue to focus on their patients. Murthi said she and her colleagues hope to start testing the practical uses of glasses in simulated hospital scenarios starting next year.

A virtual emergency room environment is impossible to replicate without the loud, distracting sounds doctors must deal with there, Murthi said, but university researchers are pioneering new ways to reproduce sound in a virtual setting.

Ramani Duraiswami, a computer science professor and co-founder of the startup company VisiSonics, demonstrated at the event how he is using sound to immerse people in virtual-reality environments.

“We perceive the world in all three dimensions using our ears. We do it all the time subconsciously … but it doesn’t always feel real in the virtual world,” Duraiswami said. “The goal of our research has been to create 3-D audio in a way that makes it seem natural.”

Though virtual reality headsets are big and bulky today, Varshney said this is just the beginning and the technology is getting better, more optimized and cheaper all the time.

“Remember how cellphones first developed … someday [the headsets] could become as lightweight and functional as wearing a pair of sunglasses,” Varshney said. “We are on the verge … of a new way to communicate and interpret the information around us.”