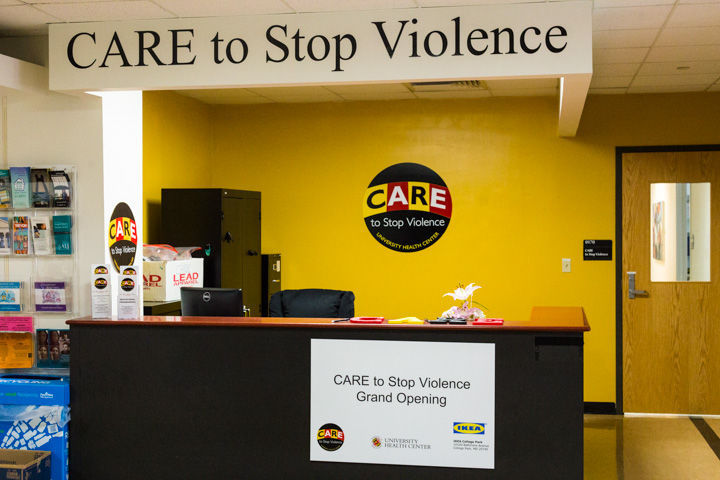 The CARE to Stop Violence office, located on the ground floor of the University Health Center, hopes its new program will help students safely get involved in dangerous situations.

The CARE to Stop Violence office, located on the ground floor of the University Health Center, hopes its new program will help students safely get involved in dangerous situations.

The majority of University of Maryland students have probably seen a fellow student too drunk, passed out and lying alone in the middle of a dorm or even outside, said Stephanie Rivero, CARE to Stop Violence assistant coordinator.

But few students feel comfortable taking action to help a student who might be in trouble, Rivero said, adding that CARE hopes to combat this problem this year with its Step Up program.

Step Up is a bystander intervention program designed to teach students and other audience members how to react to potentially harmful situations, said LaVonne Whitehead, a CARE assistant coordinator. CARE launched a “soft pilot” of the program last semester, when the office gave 33 presentations and trained about 1,600 students — most of whom were members of Greek life, Whitehead said.

The training covers situations relating to sexual violence, relationship violence, stalking, binge drinking, mental health emergencies, hazing, physical violence and discrimination, which are “things that students are seeing all the time and they’re just not knowing what to do about it,” Rivero said.

The program explains the barriers to intervening in these situations and teaches students three ways to react: to direct, or intervene in the moment to prevent a problem; to distract, or interrupt the situation without confronting the offender; and to delegate, or seek help from someone else.

CARE will be holding a Step Up launch Thursday at Hornbake Plaza, where employees will provide students with scenarios and ask whether they would direct, distract or delegate, Rivero said.

Many students won’t intervene in a potentially harmful situation because they feel as though it’s not their responsibility, they think other people will take care of it or they don’t have all of the information about what’s happening, Rivero said.

Years of research show the more people who are around, the less likely someone is to get help, Whitehead said.

The Office of Civil Rights and Sexual Misconduct has also focused its Rule of Thumb campaign around Step Up this year. The office created a video about how to intervene and has promoted the Step Up program in its Rule of Thumb posters.

These efforts are all part of CARE’s work to “spread this message as far and wide” as possible and mobilize all students on the campus to keep one another safe, Rivero said.

“Ideally, we want Maryland to be the culture where as soon as a freshman steps on-campus, they know that other people are going to protect them,” Rivero said.

Step Up programs are available upon request, and are often given to UNIV classes, PSYC100 classes or Greek organizations, Rivero said. Either a staff member and one student or two students co-facilitate the program, and CARE offers 50-minute, 90-minute and two-hour sexual violence-specific versions of the training, Whitehead said.

READ MORE: UMD’s reported rapes at a high for the decade, officials say there is more willingness to come forward

Senior environmental science and policy major Christopher Frye serves as a student facilitator for Step Up and has led one program so far this semester. Frye, a member of Sigma Phi Epsilon, said he became involved with Step Up because he was “sick and tired” of hearing about sexual assault in Greek life.

“Being in Greek life, we get a lot of attention and a lot of scrutiny for sexual assault, and I don’t think a lot of it is unfair,” Frye said. “It’s still happening. … Why aren’t we doing more to stop this?”

Sexual assault is a problem on college campuses because large groups of young people drinking in a new environment can create potentially dangerous situations and lead to poor decision-making, Frye said.

CARE hopes to train at least 3,000 students by the end of this academic year, and so far this semester, CARE has held about 10 presentations and trained nearly 250 students, Whitehead said.

Students seem to respond to the training because it is highly interactive and incorporates videos, role playing and real-life scenarios, Frye said. He added that he hopes students who go through the training “take it to heart” and apply it in their lives.

“If the students are willing to kind of like embrace this, I think we could see a big change,” Frye said. “We can educate students until they’re blue in the face, but if we don’t take the education and do something with it, then what’s the use of it?”

But students are already using this information regularly to look out for their friends, Whitehead said, adding that CARE hopes to normalize intervention in all situations, even with individuals students don’t know.

“You’re doing this with your friends already — we’re not teaching new skills,” Whitehead said. “We just want everyone to think of the University of Maryland community and make it so saying, ‘Hey, I’m just going to check in with that situation that looks kind of weird,’ sounds just as normal as, ‘Hey I’m going to go to the game on Saturday.’”