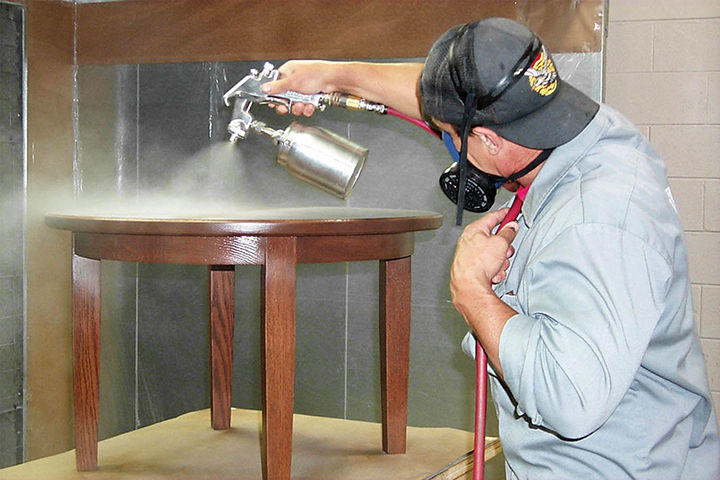 When Andrew Dicken would sit at a wooden front desk in Denton Hall during his shifts as a Resident Life community assistant, he was never aware the desk was crafted by state prisoners.

For nearly a year, the sophomore computer science major sat at that desk, which was one of the many prisoner-created pieces of furniture that fills dorm rooms all over the campus.

“It’s a little odd to me, but it’s a good thing because rather than just sitting in their cell; it let’s them do something constructive and do something for their community rather than being bored all the time,” Dicken said. “It gives some kind of way to help people or give back despite their sort of situation.”

MCE has more than 30 business units — a textile business, a meat manufacturing plant and license plate making industry — and has held a partnership with the university for more than 30 years, selling an estimated $3.5 million in furniture to the campus in 2014, Lohr said.

The industry strives to rehabilitate inmates through hard work and purpose, teaching them useful skills — in this case, through the assembly of furniture, Lohr said. To apply, the prisoners have to be free of infraction for at least 90 days and have a high school diploma or GED, she said.

Fewer than one in four inmates who work for MCE during their incarceration period return to state prison, Lohr said.

“It really is a great organization to be a part of,” Lohr said. “We employ over 2,000 on a daily basis. Aside from giving them those work skills and those work ethics, it also reduces prison idleness and really maintains the security of the prison.”

With a typical 40-hour work week, Lohr said MCE employees receive about $150 to $200 a month, depending on how long they have worked there.

Spencer Hurst-Bey, 59, of Washington State, is an inmate and the lead man in the prototype custom cabinet and special project department in MCE’s upholstery plant. After being convicted of first-degree murder in 1979, Hurst-Bey has spent more than 35 years in this state’s prison, and has worked for MCE for 25 years.

“I didn’t know anything about wood at all,” Hurst-Bey said. “Through the apprenticeship program, I gained the basic skills that I have now.”

Though his apprenticeship and training process for his MCE position was rewarding, Hurst-Bey said it wasn’t easy — he worked a required total of 8,000 hours of apprenticeship, 1,440 hours of on the job training and continuously trained with supervisors before he was qualified to work as a full-time MCE employee, which took six years.

“On a basic level, it gives me a reason to wake up in the morning,” Hurst-Bey said. “It shows me through my work — when you can take a piece of raw lumber or raw material and turn it into something useful — it shows me you can do the same thing with our lives.”

Dicken said this kind of process is beneficial for the state, the university and the prison inmates — although he never would have expected it.

“Our parents’ tax money is going to the prison’s anyway, so we might as well have a little productivity out of it,” Dicken said. “The fact that we get to see a little benefit from that doesn’t hurt.”

Though MCE is a large help to the community with providing products at reasonable prices, Lohr said, the mission is to focus on the re-entry and rehabilitation of the inmates, which makes for a smoother and productive transition back into society.

“The majority of the men and women in [the prison system] now are going to be our neighbors one day,” Lohr said. “So we do all we can to promote the rehabilitation that cuts down on the crime in Maryland.”

Freshman English and secondary education major Sarah Schurman, who lives in Bel Air Hall, said it’s important for people to know where the products they use come from.

“It’s important for more people to know where the stuff that they use everyday comes from,” Schurman said. “We should have a sense of gratitude for them for that. It kind of puts things in perspective in an interesting way.”