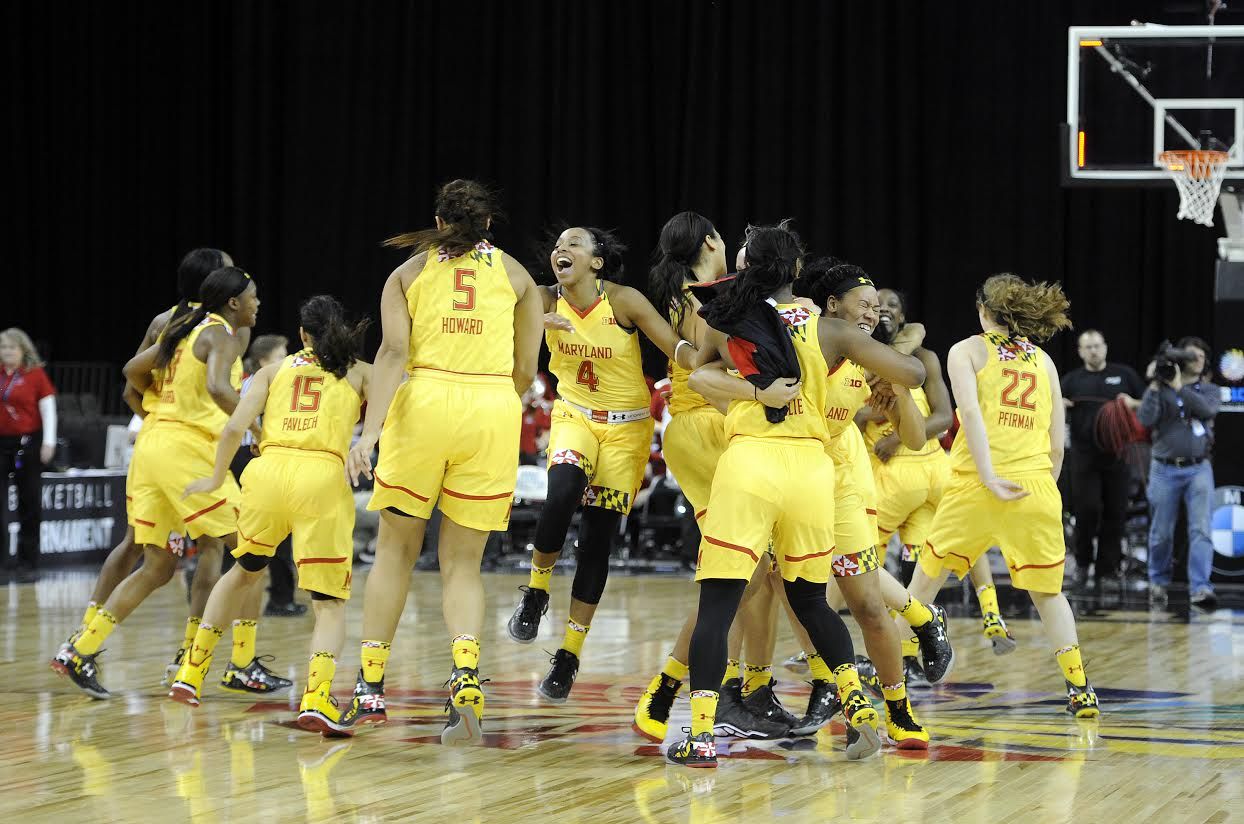 The team celebrates after beating Ohio State, 77-74, for the conference title Sunday in Hoffman Estates, Illinois.

The team celebrates after beating Ohio State, 77-74, for the conference title Sunday in Hoffman Estates, Illinois.

HOFFMAN ESTATES, Ill. — With the ball in the hands of the nation’s leading scorer and less than 20 seconds on the clock last night, No. 3-seed Ohio State had the chance to hand the top-seeded Terrapins women’s basketball team its first loss in 24 games.

Buckeyes guard Kelsey Mitchell attempted to drive the lane, but she was called for a travel with seven seconds left after taking several hits from Terps defenders.

Terps guard Lexie Brown then drew a foul and calmly sunk a pair of free throws at the other end to give her team a three-point advantage with 3.8 seconds remaining. Mitchell’s 3-point try before the buzzer from just inside half-court clanged off the rim to ensure the Terps’ Big Ten tournament win.

The Terps’ bench stormed the court as confetti rained down in celebration of a 77-74 win over the Buckeyes at Sears Centre. It was a back-and-forth affair during which the Terps’ lead bounced between one and six points for the final 13 minutes.

“This team just continues to separate themselves in terms of making play after play after play for one another,” coach Brenda Frese said. “They definitely had to earn that game.”

The tournament finals victory marks the Terps’ 24th win in a row, which matches the program record set during the 2005-06 and 2006-07 seasons. It also gives the Terps their first Big Ten crown after earning a record 10 conference tournament titles in the ACC, and it provides an automatic bid to the NCAA tournament.

“It’s amazing,” Brown said with the cut-down net draped around her neck. “We are just having fun on this ride. Now we have no choice but to keep the streak going.”

Brown, who led the Terps in scoring in the first two tournament contests, poured in 19 points to pace the team once again. Three other starters joined Brown, the tournament’s Most Outstanding Player, in double figures.

But they still had to combat Mitchell, who was single-handedly trying to pull her team to three straight wins in the tournament. After scoring 29 points in each of the Buckeyes’ first two games, the coaches’ Big Ten Player of the Year selection finished with 31 points on 11-for-20 shooting last night.

“It was a lot of work. It took a lot of work,” said guard Shatori Walker-Kimbrough, who matched up with Mitchell for portions of the game. “Not just the person on her, but everybody had to be locked in on the court. … She’s a great player.”

Mitchell pulled her team back after the Terps built a 15-point advantage early in the second half. Ohio State put together a 14-2 run that cut the Terps’ lead to 54-51 at the 12:49 mark.

The Terps refused to let the Buckeyes climb ahead, though.

“[Mitchell] took it upon herself to assert her will on us,” Brown said. “We responded great. We didn’t buckle.”

With the help of a 49-28 rebounding edge and a 22-7 advantage in second-chance points, the Terps fended off Ohio State down the stretch.

In addition to their dominance on the glass, the Terps caught fire from behind the arc. The Terps started the night by hitting 9 of their first 12 attempts from downtown.

Their hot shooting eventually cooled, however, and that’s when the Buckeyes climbed back.

But with less than five minutes remaining in regulation, center Brionna Jones, who battled foul trouble all night, grabbed offensive rebounds and finished putbacks on two possessions to help the Terps stave off the Buckeyes.

Jones’ layup at the 3:33 mark was the Terps’ last field goal of the contest, but they managed to hold the lead until the final buzzer.

And instead of suffering a heartbreaking loss on a Mitchell bucket that could’ve capped a double-digit comeback, the Terps remained on the court to receive their second Big Ten trophy of the season.

“We’re not done. We’re not done yet,” Walker-Kimbrough said. “We got two goals down, and we still got one more to go.”