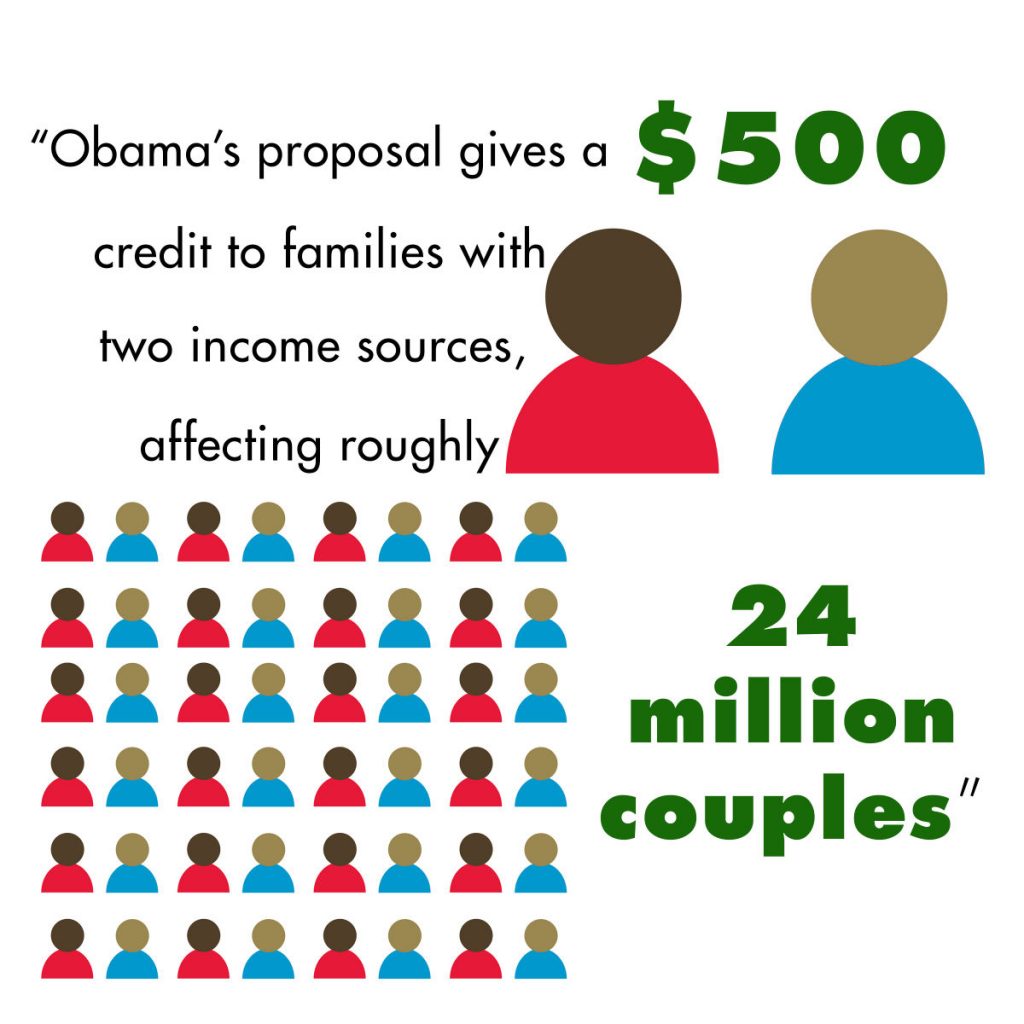 Two university economics professors recently designed a tax reform proposal which President Obama adopted in his State of the Union address and which could impact millions of families nationwide.

The second-earner tax credit was created by professors Melissa Kearney and Lesley Turner, who saw an inherent problem in the country’s tax code, which imposes extra costs on families with two sources of income.

Because family income is pooled under the current tax system, Kearney said, second income sources are taxed at much higher rates than if those workers were single. For example, the proposal states, a family with a primary earner who makes $25,000 per year would receive only about 30 percent of any income the primary earner’s spouse brought in.

This loss of income can discourage spouses from finding a job, and it makes paying child-care costs increasingly difficult.

Kearney noted that the gains from national economic growth have gone disproportionately to upper-income households, and said she has focused her research on ways to help lower-income families.

“It does raise really important challenges and questions about how to ensure shared prosperity and make it such that folks near the middle and bottom of the income distribution can share in these income gains and productivity gains going forward,” she said.

To remedy this problem, which Kearney said dates back to 1940s tax policies created when two-worker households were less common, the professors proposed a tax credit to give money back to families with two working parents.

“Our proposal is really motivated by our views as public finance economists that, both on efficiency grounds and on equity grounds, it is undesirable that people working at low wages pay very high marginal tax rates,” Kearney said. “This particular group is hit really hard by this because of an unfortunate design in the tax code, which is pretty easily addressed by implementing a second-earner credit or deduction.”

Kearney and Turner published their proposal in December 2013 with the Hamilton Project, a nonpartisan think tank aimed at helping middle-class families.

The proposal attracted immediate attention from policymakers, and in July, Kearney met with Obama and other economists for an informal lunch to discuss possible tax reform ideas. Just days before the State of the Union, an administration staffer called Kearney to tell her that her ideas had resonated with the president and he would be proposing a variant of her second-earner tax credit.

In his annual address, the president coined the term “middle-class economics” to describe the combination of Kearney’s second-earner credit with a tax credit for families with young children, as well as measures to help people pay for college and save for retirement.

Stephanie Rennane, a doctoral candidate who assisted the professors’ research, said she was excited to see the president integrate their ideas into his tax reform proposal.

“I care a lot about policy; I think most people who work on these programs do,” Rennane said. “You always hope that your work will make a difference and sometimes it feels pretty far removed from that, so it’s pretty exciting when you actually see it potentially being involved in some big decisions.”

To make up for the loss in revenue from the tax credit, Obama proposed increasing the tax rate on capital gains and large financial institutions, measures targeted at wealthier individuals.

Before being implemented, the proposal would have to be passed by a Republican Congress, but Turner said she is confident it can receive bipartisan support.

“It’s not just providing additional benefits — it’s providing a return and increased benefits for families that are working and doing everything that they can in this economy to get ahead,” Turner said. “I think that resonates on both sides of the political spectrum.”