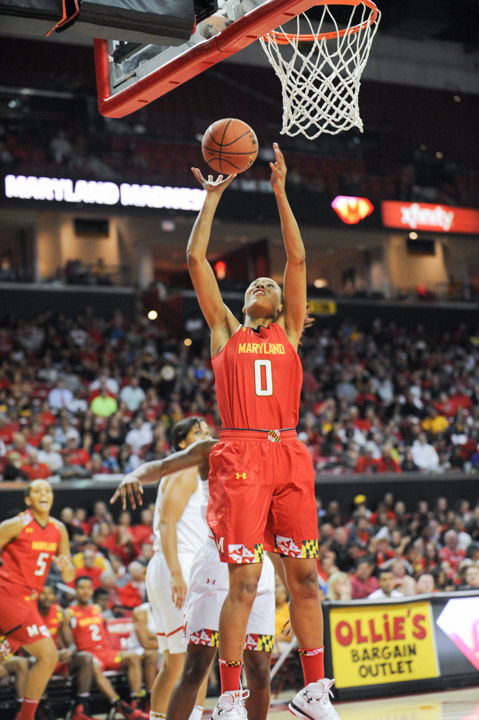 Forward Aja Ellison scores a layup when the Terps held Maryland Madness as a Big Ten team on Oct 17, 2014 at the Xfinity Center.

Forward Aja Ellison scores a layup when the Terps held Maryland Madness as a Big Ten team on Oct 17, 2014 at the Xfinity Center.

Ever since the Terrapins men’s basketball team finished last season with a disappointing 17-15 record, the focus has been on how the incoming freshman class led by McDonald’s All-American Melo Trimble will help soften the blow of five offseason transfers.

But the Terps women’s basketball team is expected to lean on a group of rookies as well.

Without players as highly touted as guard Lexie Brown or former forward Alyssa Thomas entering the fray, there’s a different kind of pressure on the new three-member incoming class to carve out its role on the team.

But guard Kristen Confroy, forward Aja Ellison and guard Kiara Leslie have been doing their best to fit into the squad’s culture so far, teammates said.

“They’re ahead of normal freshman classes in terms of picking up concepts from the team,” junior forward Tierney Pfirman said.

Ellison, who is the highest-ranked of the three by All Star Girls Report as the country’s No. 45 recruit, also is expected to perform well, Frese said. Ellison and Leslie both averaged a double-double during their junior season, but both sat out their senior year because of injuries.

“[Leslie] kind of has that imposing presence, physicality … and is someone whose future is extremely bright,” Frese said.

The freshmen took on these expectations Saturday in the Terps’ opening exhibition game against Goldey-Beacom.

In the Terps’ 103-43 rout of the Lightning, the first-year players scored a combined 23 points, 10 of which were from Confroy. Confroy also grabbed seven rebounds, while Leslie led the group with 22 minutes on the court.

Though they were occasionally shaky — Leslie turned the ball over four times — the exhibition game gave a peek at what the three freshmen have been working on as they adjust to the college game.

The most difficult change might be getting used to having longer practices, six times a week.

For Ellison, there’s the matter of balancing her desire to prove herself and giving her body time to recuperate. “Coming in as freshmen, we normally want to overwork and work hard so we can be up to speed with the older girls, but … rest day is very important,” Ellison said.

Now that the three have gotten into the swing of things, they’ve turned their attention to what’s in store as the team enters its first season in the Big Ten.

Leslie grew up in North Carolina, home to four ACC schools, while Ellison, a Burlington, New Jersey, native lives a little less than an hour away from another new Big Ten school, Rutgers.

Confroy, meanwhile, comes from an area that has been in Big Ten territory for years. The Solon, Ohio, native has friends who play at other conference schools, including a former AAU teammate who plays for Indiana.

“I’m excited to play against her, it should be fun,” Confroy said. The Terps will host Indiana on Feb. 26.

Confroy said she has “all the confidence in the world” in the team and is looking forward to what the Big Ten has in store.

“Definitely looking forward to traveling more and getting more exposure because we really want to show the country what Maryland basketball is all about,” she said.