What it’s like watching ‘Gilmore Girls’ for the first time 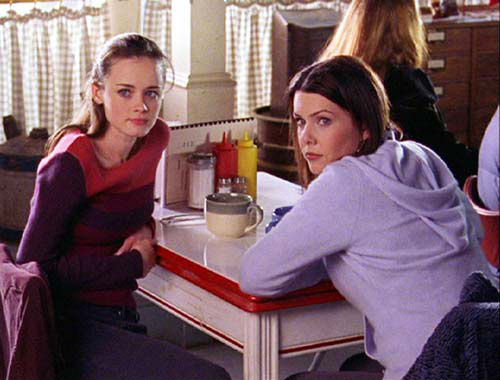 Until this week, I hadn’t the slightest idea what Gilmore Girls was about. In fact, I was so clueless that I completely confused it with Gossip Girl (haven’t watched that, either).

OK, OK, fine, I’ll be honest with you — it’s because they both have double-G names.

So I was a little surprised (read: shocked) when I discovered that Gilmore Girls wasn’t a juicy drama about teen hookups, breakups and makeups.

Because all seven seasons just went up on Netflix, I thought I’d give it a shot. Logically, I started with the pilot. I don’t know everything about the entire show from this one encounter, but here are my observations from watching the Gilmore Girls pilot for the first time:

It’s just coffee. I think you should see someone about this.

She’s not actually her mom right? That has to be a joke.

I thought they were like best friends or something.

Sookie is gross. OK, sure, she’s sweet, but when she’s bleeding in the food that’s not cute. It’s just nasty.

The grandparents could not be any more stuck up and annoying.

Excellent job – I dislike them already.

Also, thank you, Gilmore Girls, for my new approach to group projects.

Rory, for goodness sakes, can you just talk to the guys?

It would make this show sooo much more interesting. Or maybe it would just make it like Gossip Girl.

Ok. Yeaahh. Maybe not. Keep being all bookwormy – that’s OK too.

But congrats on delivering my favorite lines of the show so far:

“It’s my mother’s name too. She named me after herself. She was lying in the hospital thinking how men name boys after themselves all the time, ya know, so why couldn’t women? She said her feminism just kind of took over.Though personally, I think a lot of Demerol went into that decision. I never talk this much.” Luke is such a downer

I’m guessing he’ll end up with Lorelai in the end.

Lorelai, pull down your skirt please.

Your 16 year old daughter doesn’t even dress like that. You said you were joking about sleeping with the principal? I wouldn’t put it past you.

All in all, Gilmore Girls was not what I expected. There was no parties, no drugs and no sex.

(I’m really not sure why I had these expectations in the first place.)

It was simply the cute and heartwarming story of a mother and daughter trying to find their way. At first, I thought the show was boring, but wow, did it grow on me. While dinner with the snooty grandparents is mundane, the characters are incredibly well developed. They’re witty and generally likable.

It’s an easy-to-watch show that goes perfectly with a cup of coffee … or five.