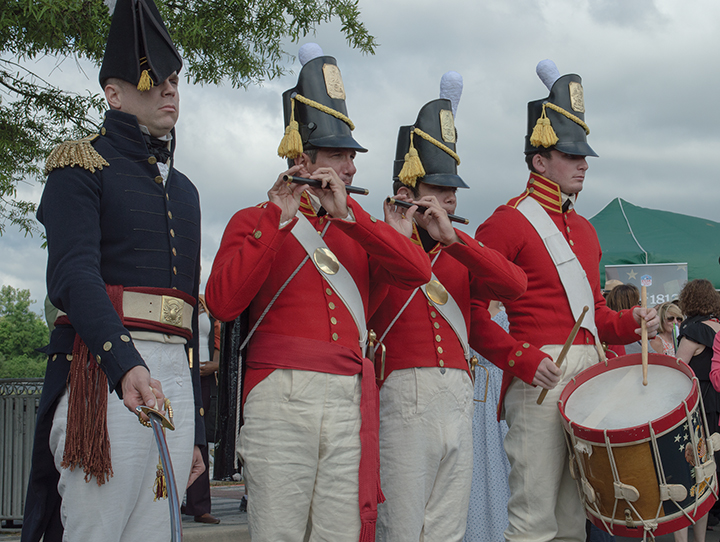 The Fort McHenry Guard Fife and Drum Corps performs the national anthem at Bladensburg Waterfront Park for the opening of the Star-Spangled Banner National Historic Trail on June 5.

The Fort McHenry Guard Fife and Drum Corps performs the national anthem at Bladensburg Waterfront Park for the opening of the Star-Spangled Banner National Historic Trail on June 5.

They wore red, white, gold and black, but the men in uniform were celebrating something much bigger than this state.

On June 5, they donned the garb to help commemorate the state’s role in the War of 1812.

The Star-Spangled Banner National Historic Trail connects this state, Virginia and Washington with 560 miles of pathways, dotted with historic sites and points of interest such as Fort McHenry and Patterson Park, according to the trail’s website. Congress established the trail in 2008, and it is one of 19 national historic trails managed by the National Park Service, according to the trail’s comprehensive management plan.

“Sometimes, you know the expression, ‘You can’t see the forest through the trees?’” said Bill Pencek, the War of 1812 Bicentennial Commission executive director. “In and around the Beltway and the interstates and the shopping malls, we sometimes can’t see these stories that are literally in our own backyard.”

Men and women dressed in period costume offered visitors bits of historical information as part of the Chesapeake Campaign. A fife and drum quartet, also in costume, played the anthem and introduced O’Malley and the officials with a small musical number.

There was a flag unfurling, in which a large replica of the original American flag was carefully unfolded. Vincent Vaise, Chief of Interpretation at Fort McHenry, gave a small history lesson on the flag and the Battle of Bladensburg, which happened during the War of 1812.

Applause followed as the last fold on the flag revealed a new 30-by-40 copy of the original to cries of “Huzzah!”

“These bicentennials are cool because they wake us up from our historical amnesia,” Vaise said.

The trail has a waterborne component in the Anacostia Water Trail, a 9-mile

waterway from Bladensburg to Washington.

Foster said there is a commitment to restore the river to a condition that’s fit for fishing and swimming by 2025.

“Clean water is something that’s a civil right, a birthright, and it’s something we’re going to pass on as a legacy to our children,” he said.

This university also played a role in the commemoration: Dining Services representatives handed out free servings of a specially created flavor from the Dairy. The flavor, strawberry ice cream with chocolate malt “cannonballs” and patriotic sprinkles, was special to the event, Dining Services spokesman Bart Hipple said. The leftover ice cream will be sold at the Diary until it runs out.