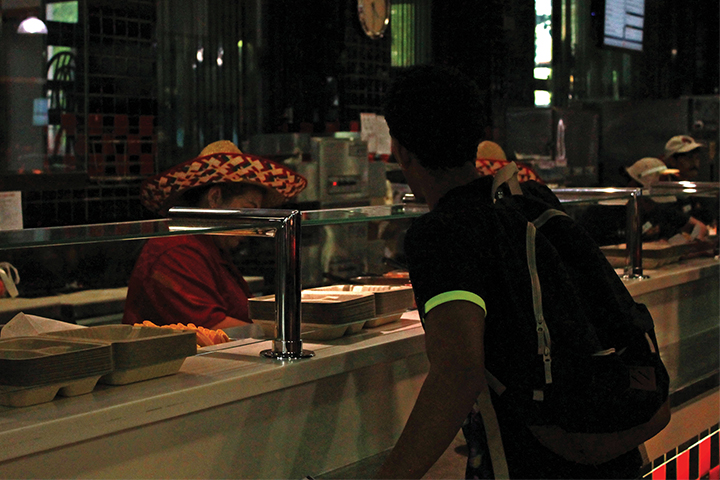 Employees were dressed up and decorations hung from both the North and South Campus dining halls’ ceilings for the Cinco de Mayo dinner, for which Dining Services served foods such as tacos, burritos and tres leches cake slices in celebration of the holiday.

“At first we thought of it as kind of humorous and a little bizarre,” said Andia, a sophomore anthropology and journalism major. “Then we started seeing [multiples] of them, just mustache and the sombrero, and then I just — I drew back for a second.”

Andia and Muñoz, two Latino students, said they tried to take a photo of an employee wearing the costume when Imelda Mejia, one of the dining hall’s managers, approached them and told Andia she could not photograph employees without the Dining Services’ marketing department’s and the employees’ permissions.

Mejia and Andia spoke in Spanish with each other, and the student asked Mejia if she felt it was right to celebrate the holiday in such a way, Andia said.

Andia then approached a cashier wearing the costume, and Sean Tilton, the dining hall’s assistant director, told her she could not distract the employees during their shifts but could speak with them when they go on break as long as they were willing, she said.

Andia said she found the hats and false mustaches offensive, much as others might react to a costume featuring blackface, but the employees Andia questioned were not willing to voice their opinions or did not consider the costumes a problem.

Tilton sent an email to Hipple about the scenario, writing that students were concerned about the costumes and would contact him about it, Tilton said.

Hipple said he received the email and did not hear from any concerned students, but he saw tweets from students — including Andia — about the stereotypes implied by the costumes. He said Dining Services meant nothing offensive by the celebration and that the diners hold several special dinner nights throughout the semester with decorations and simple costumes for the employees to wear.

However, Hipple said, these celebrations could be temporary because they are meant to be something unique for students to enjoy but might get too repetitive over the years.

Hipple plans to bring up this issue at the next Residence Hall Association Dining Services Advisory Board meeting to determine whether other people were insulted and did not speak up, he said.

Andia said she did not find the food and recognition of the holiday offensive, but she felt the costumes were not an accurate representation of the Latino culture.

“Because no one says anything, no one knows it’s offensive, and it just continues,” she said.