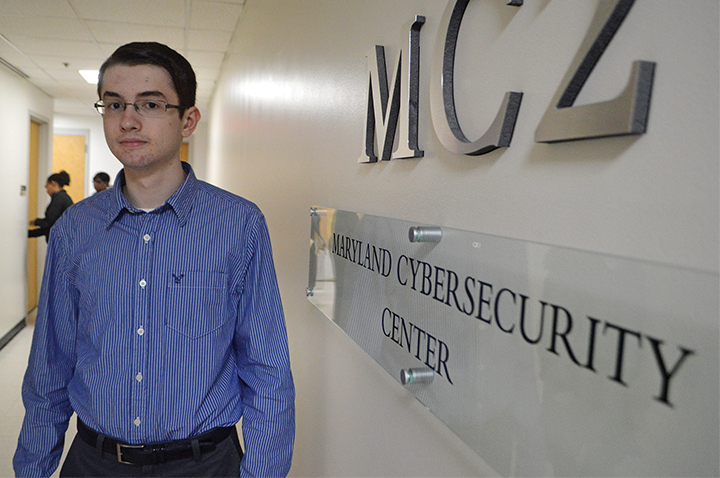 Christian Johnson is getting comfortable having his picture taken.

The freshman computer science major has garnered attention from the likes of The Wall Street Journal (“they told me not to smile”) and is among the rising young faces in a new generation of cybersecurity specialists.

His resume includes positions such as NASA big data specialist, CEO of a computer company he founded in high school and student board president of this university’s Advanced Cybersecurity Experience for Students honors program.

In February, the 19-year-old was chosen as the lone undergraduate student representative in the President’s Task Force on Cybersecurity. But if the thought of working in the wake of February’s massive data breach with experts decades his senior scares him, he doesn’t show it.

“This is really an opportunity for everyone across the university to pull together their collective resources,” Johnson said, “and not only strengthen against the problems that came from the breach, but [also] our talent and resources in cybersecurity.”

Johnson addresses questions with the poise of academia but without much of the pomp, and he has the look of a man nearly, but not quite, grown into his body. He wears half-rimmed glasses and dark slacks just short enough to see two white socks of different lengths on his ankles.

“His potential is probably only limited by the wisdom of the choices he makes as he moves forward,” said Gary Johnson, his father and mentor. “We’ve taught our children that part of life is about financial position, but it’s also about character.”

Christian Johnson is the only member of the 18-person task force legally unable to buy a beer. But he holds a spot in two of four subgroups — policy and data — and so far has demonstrated his skill, said Ann Wylie, task force chairwoman.

“Christian, in the first meeting, was … holding his own certainly, not just sitting back and taking things in, but an active and very helpful participant,” she said in a voicemail yesterday. “I’m just very pleased that he’s on the task force.”

Johnson’s computer science roots go back to tinkering with his father and his grandfather, Robert Johnson, on an original IBM Personal Computer in the 1980s. After Gary Johnson’s mother died in 1983, he and Robert spent countless hours working with the machine, eventually enabling it to process the financial reports for Robert’s job. The PC could do in an hour what it had previously taken Robert days to complete.

“He was paid for the report, not the hours that he worked,” Christian Johnson said. “So he would just turn in the report early and take days off with my dad.”

Years later, Gary helped Christian build his first computer at age 6 in the basement of their home in Buffalo, N.Y.

“Honestly, it’s like LEGOs,” Christian Johnson said. “Most kids can sit down and build a computer if someone is showing them. You know, it’s, ‘Put this thing here. Put this thing there.’ It’s not as impressive as people make it out to be.”

That first project jump-started a life’s passion for Christian: He spent three years breaking and reformatting the computer about 50 times and spent hours in the basement every day after school. The basement was a workshop and a safe haven, a room he fondly recalls as looking “kind of like an archaic computer science museum.” It still houses his grandfather’s IBM.

When Johnson was 10, he and his father built a network in their house. About two years later, the father conceded that his son’s computer skills had surpassed his own. While attending Canisius High School, a private Jesuit school in Buffalo, Johnson created Maplegrove Partners, a computer company that serviced the western New York area.

Now with Christian living hours from home, his father said they video chat on Skype as much as possible, so that even when they’re apart, the technology keeps them together.

RENAISSANCE PEOPLE OF THE COMPUTER AGE

At about the time he established Maplegrove, Johnson joined NASA INSPIRE, a program for students interested in STEM topics. As a junior in high school, he was accepted into NASA’s Langley Aerospace Research Student Scholars program in Virginia, where he completed his requirements in four weeks — six weeks fewer than the expected 10.

“I sat down with the branch manager of the information technologies branch at NASA Langley, and she basically said, ‘What do you want to do?’”

He decided he wanted to focus on a big data system that NASA had been collaborating on with IBM. It had been offline for two weeks and no one from either organization could get it back up and running.

“I came in the next day to work and fixed it,” Johnson said. “And that pretty much earned me a permanent spot [as a contractor] there.”

Johnson takes pride in his technical achievements, but he said that many people are doing the same work he is. The challenge often forgotten among those in the field, he said, is that of an ethical capacity.

That challenge is part of the reason he chose to come to this university. In the fall, the Honors College unveiled ACES, the country’s first four-year cybersecurity honors program. An influx of computer engineers is not enough to solve the threat of a cyberattack in the future, ACES members said. It will also take a number of people who can consider the economic, legal and ethical issues surrounding the matter.

“It’s a great learning community that has kind of embodied that kind of principle that we learn together, and it doesn’t matter where we are in our track,” Johnson said. “We’re all coming out on the same side of the green pasture, so let’s work together to try to get there.”

“Christian represents many of the students [in the program],” Cukier said. “They have the classwork, but they take advantage of what ACES has to offer. They know it’s just as much about experiential learning.”

This summer, Johnson will work as a systems application developer, or “growth hacker,” at Gallup’s headquarters in Washington and as an advanced systems developer for Mid-Atlantic Crossroads, a network management company with offices in College Park.

“Growing up, people at first thought I was insane,” Johnson said. “Eventually it just became, ‘Yeah, that’s Christian. That’s just what he does.’ … And that’s really the best position to be in: where people support you and you do what you can to support them.”