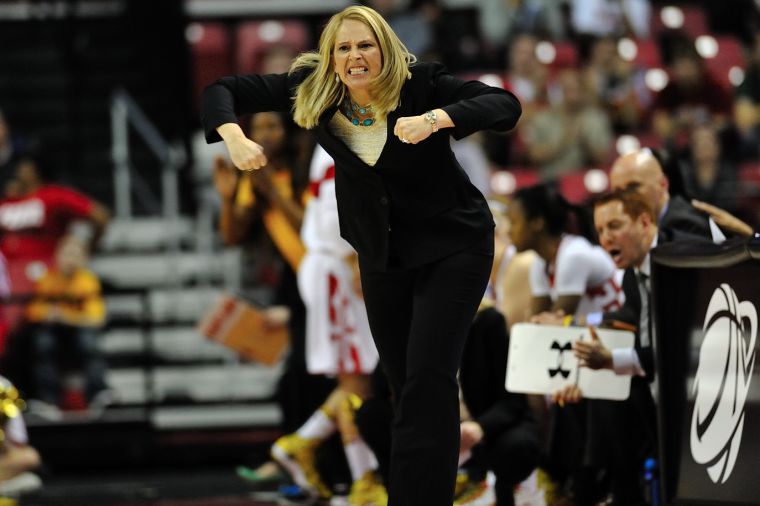 The last time the Terrapins women’s basketball team faced Tennessee was Nov. 26, 2005, when coach Pat Summit was in 32nd year with the Volunteers, the only team she coached in her Hall of Fame career.

Brenda Frese was in her fourth season with the Terps after spending time coaching two other programs, and she watched Tennessee’s star forward Candace Parker score 19 points in the Terps’ 80-75 loss that night.

In the No. 4-seed Terps’ Sweet 16 matchup against No. 1-seed Tennessee on Sunday afternoon at KFC Yum! Center in Louisville, Ky., Frese, now in her 12th year as coach, will look to keep her team’s season alive in her second meeting against one of the sport’s most storied programs.

“You have a program as storied and with tradition that Tennessee has had,” Frese said. “We’re really looking forward to the matchup.”

Though Tennessee won the last meeting between both teams, Frese would end up leading the young Terps team to their first national championship that season, and the Volunteers season ended in the Elite Eight.

Entering this afternoon’s contest, both teams look different. The Terps, who had only one upperclassman starter during their national title run, have three seniors in their starting lineup this season. Holly Warlick, a long-time assistant, is now Tennessee’s coach.

But even with Summit not involved in the game like she used to be, the Terps still acknowledge the impact she has had on women’s basketball.

Like their matchup against Texas in the round of 32, the Terps have similar strengths as their opponents. Tennessee has a plus-11.8 rebound margin this season and has nine players in its roster that average at least 15 minutes per game this season.

Against the Longhorns, the Terps 42-33 rebounding edge was a key factor, and their final two rebounds sealed a slim 69-64 victory. The Terps think rebounding and bench scoring will be of similar importance against the Volunteers.

“Both teams are similar in a lot of ways,” Frese said. “I guess it’s going to come down to who does it a little bit better in terms of who will defend who better to be able to limit points in the paint and who can keep each other off the glass.”

With the Terps looking for their first win against Tennessee since 1992, a chance to confirm a second Elite Eight appearance in three years will be another motivating factor. So after the opening tip Sunday, the team won’t be thinking about the Volunteers’ prestigious history.

“At the end of the day, when you get between the lines, all of that stuff goes out the window,” Moseley said. “It’s the five of us against their five.”