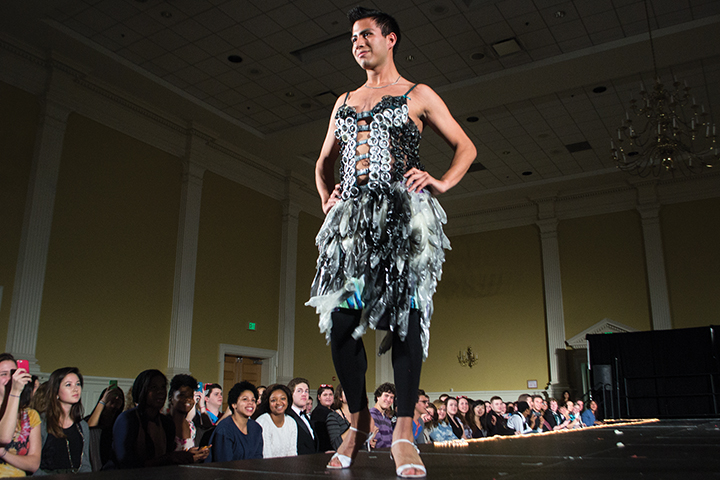 University of Maryland hosted a Condom Couture Fashion show in Stamp Grand Ballroom on Thursday, December 5 in awareness for the World AIDS Day to promote sexual health. The event was planned by Bedsider UMD, SHARE Peer Educators and Theta Pi Sigma and supported by University Health Center, MICA and Pepsi and ONE Condoms. Many official and unofficial student group entered contestants into the competition.

University of Maryland hosted a Condom Couture Fashion show in Stamp Grand Ballroom on Thursday, December 5 in awareness for the World AIDS Day to promote sexual health. The event was planned by Bedsider UMD, SHARE Peer Educators and Theta Pi Sigma and supported by University Health Center, MICA and Pepsi and ONE Condoms. Many official and unofficial student group entered contestants into the competition.

There isn’t just one way to wear condoms, and 13 student groups showed how to wear them in style in this university’s first Condom Couture Fashion Show.

Thursday night’s fashion show, inspired by a similar event at the University of Georgia, was held in honor of World AIDS Day and to raise awareness about the disease and the importance of safe sex.

Bedsider UMD, a group that provides information about birth control, along with the Sexual Health And Reproductive Education peer program and Theta Pi Sigma, the university’s first LGBT fraternity, coordinated the event.

“The idea is to reduce stigma around condoms by having them used in everyday things,” said Megan Konigkramer, senior bioengineering major and SHARE peer educator.

Students filed into the ballroom, many dressed in black-tie attire, and collected free condoms, posters and sexual health brochures from tables sponsored by SHARE and Bedsider UMD.

Models strutted down the makeshift runway before a panel of judges to compete for first and second place. Their condom creations ranged from elegant evening gowns and short dresses to costumes. Sigma Nu’s model, a lifeguard, held a flotation device made of an inflated condom, “guarding against HIV.”

“It’s interesting to do a fashion show to get awareness about practicing safe sex,” said Betty Samson, an audience member and senior kinesiology major. “It’s important, especially in college where people are really sexually active.”

While the panel of judges debated a winner, Bedsider UMD ambassador Connor Davies asked the audience sex trivia questions: “Where is the most common place to have sex other than the bedroom?” The correct answer — a car, she said.

Student raffle winners also walked on stage to collect their prizes of packages of ribbed and studded condoms.

At the end of the evening, the judges announced the winners.

First prize went to L-Town 246, a group of five friends and roommates whose model dressed in a Greek god’s outfit made of condoms spray-painted in gold and held a shield with the red AIDS awareness ribbon.

Second place went to Satanic Mechanics, whose model wore a fancy black and gray condom dress complete with a boa made of inflated condoms strung together and a condom necklace.

“No matter how you dress or what you wear, you deserve to have a safe, healthy, respectful sex life,” said Jill Santos, president of UMD Feminists.

Beckwith said she’s noticed increased awareness this semester among students about sexually transmitted infections. The University Health Center served over 300 students at its three free STI testing days over the course of the semester, the highest turnout ever for free testing, Beckwith said.

“We’ve had free testing for over three years, and I’ve never seen it like that,” she said.

Through events like the Condom Couture Fashion Show, Beckwith said she hopes to continue the conversation about safe sex on the campus to prevent the spread of dangerous diseases like HIV.

“There’s still a lot of misinformation and still a lot of stigma around HIV,” she said. “We live in a society that sends very confusing messages to young people about sex. Once they’re empowered with information, it becomes a lot less scary.”