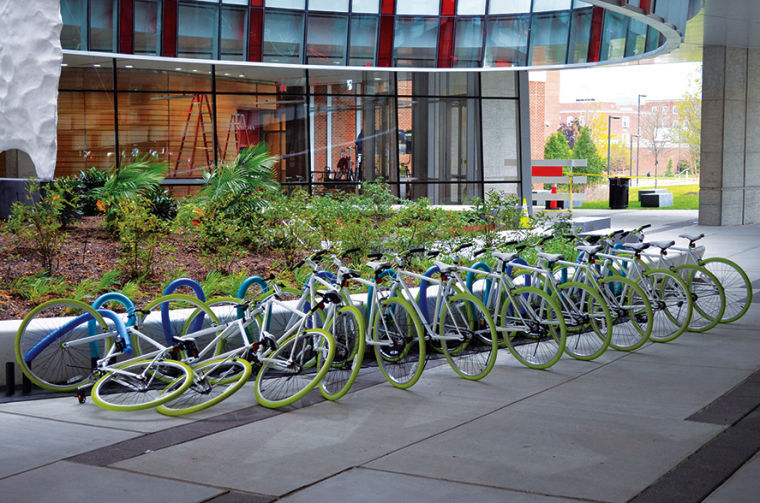 Bikes on the set of Veep outside the Physical Sciences Complex on Oct. 9.

Although it was intended for science, the newly completed Physical Sciences Complex got a taste of fame this week as a set for HBO comedy series Veep.

With construction beginning more than three years ago, the projected $128.7 million, state-of-the-art complex was completed Sept. 27, marking the end of what Facilities Management Capital Projects officials called “the largest, most complicated project” the department has undertaken.

The complex, located on North Campus between the Regents Drive Garage and the Campus Farm, contains labs that will facilitate joint research initiatives with the National Institute of Standards and Technology, said Bill Olen, Capital Projects director. Producers for the show found the building’s sleek design and glass walls appealing and opted to use it as a backdrop for episodes in the show’s third season.

“I don’t know how they find the places,” said one crew member, who asked to remain anonymous because of a nondisclosure contract. “One: It’s empty, and two: It has that modern look inside.”

Over the show’s past two seasons, producers filmed in this state because of the tax credits offered through the Maryland Film Office, an extension of the state Department of Business and Economic Development that seeks to bring television and film projects to this state, another anonymous crew member said. The film office also keeps a list of available filming locations, which includes this university. Starting Oct. 2, the cast and crew were on the campus filming at several locations, including the new complex yesterday and Tuesday.

“The people building it weren’t entirely happy with it,” the crew member said. “But it was all smoothed over.”

Olen said Facilities Management is still waiting on final approval from the county health department for use of ground water for toilets and urinals, a feature aimed at making the bathrooms more environmentally friendly and energy efficient. The university is also seeking LEED certification for the complex from the U.S. Green Building Council.

Yoojin Park, a sophomore marketing major who lived in nearby Centreville Hall during the construction, said she was impressed by the final product, although the building process was sometimes inconvenient.

“It was annoying when they would block off some of the sidewalk,” Park said. “But we were more curious as to what it would be.”

The building’s use of natural light is one of its best features, Park said.

“I really like the open windows,” she said. “I like the colors that they used, and I think the design is just pretty sweet.”

Margaret Magnaye, a sophomore hearing and speech sciences major, said she enjoyed watching a compilation of photos show in the building taken with cameras that overlooked its construction.

“I went with some friends to look at the building at night, and the windows are naturally red, which is really cool,” she said. “It just looks like a really neat place for people to hang out.”