Community comes together to create ‘Tree of Life’ for Memorial Chapel 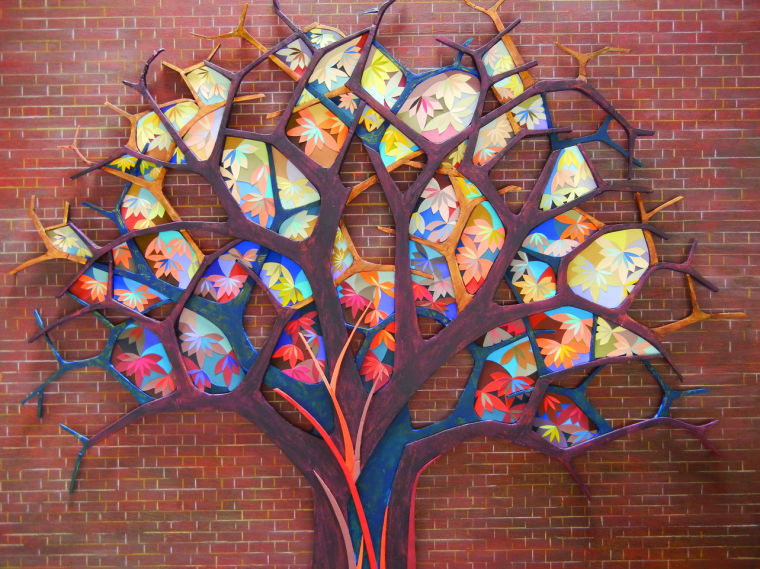 Due to an editing error, a previous version of this story incorrectly stated the type of stitching used. The story has been updated to reflect the correction.

They were seasoned artists and novices, bringing with them a variety of faiths and beliefs. They came together for hundreds of hours of work, and after two years, their creation is nearly complete.

The “Tree of Life,” a handcrafted sculpture featuring needlepoint foliage, will be installed in the Memorial Chapel’s West Chapel starting July 29, showcasing the efforts of more than 75 members of the university community.

Standing 15 feet tall and 18 feet wide, the tree features a trunk and branches made of wood and 52 volunteer-needlepointed tapestries. It’s part of the transformation of the West Chapel into the “Garden Chapel,” which will also include a new altar and piano.

“It’s the sort of place where we see students coming, having quiet time,” Platz said. “We wanted to make it welcoming for a variety of faith communities.”

They decided on a tree because it is a universal symbol for many faiths.

Platz envisioned community involvement, so she contacted local artist and university alumna Catherine Kapikian, who specializes in community-based art, to design the tree. She painted the wooden base, and all the pieces have been delivered to the chapel to be installed.

“There are deep correspondences between engaging in a creative process and the deepening of one’s spiritual life,” Kapikian said. “And that’s what’s so life-giving about a project like this.”

To assist in coordinating and teaching a crew of needlepointers, Chapel Coordinator Denise McHugh enlisted university alumna Soozie Brendler. An active member of the Potomac Fiber Arts Guild and a former stitchery instructor, Brendler was eager to take on the challenge.

In April 2012, Brendler hosted the first “stitch-in,” in which needlepointers gathered to work together. Members of Brendler’s guild, university students, faculty and staff, as well as the College Park Needle Arts Society, gathered in the chapel conference room or at Stamp twice a month to work, socialize and enjoy Platz’s desserts.

Brendler said teaching first-time needlepointers the basket weave stitch was sometimes a challenge, but she said she is grateful for the people she’s met, many of whom found the lengthy process therapeutic as they shared personal struggles.

“Needlepoint can be meditative and relaxing,” Brendler said. “It gives me something to do with my hands and quiets my brain.”

After the group finished the needlepointing, Brendler “blocked” the canvases, shaping them to fit into the frames of the branches.

Meanwhile, Rockville-based carpenter Jim Doman created the wooden base and branches of the tree. It took him two-and-a-half weeks to trace and cut out the base and three layers of branches, he said.

“It’s always fun to tackle something that you don’t know if you can do it,” Doman said. “It’s also fun when you can actually accomplish it.”

Doman’s neighbor, David LoBosco, helped him cut and sand the wooden parts of the structure. LoBosco will enter the university as a freshman computer science major this fall and said he is proud to have worked on a project that will be displayed at his school.

“Maryland is a school that pulls together a lot of different cultures,” LoBosco said. “It was cool to build something going into Maryland that was representative of that.”

McHugh hopes the tree will foster a climate of reflection in the chapel and connect it to the garden outside.

“I think the Tree of Life has been a wonderful representation of the community coming together, individuals of all ages and different faiths, to create something beautiful for our campus,” she said.

A dedication ceremony is tentatively set for October, Platz said.