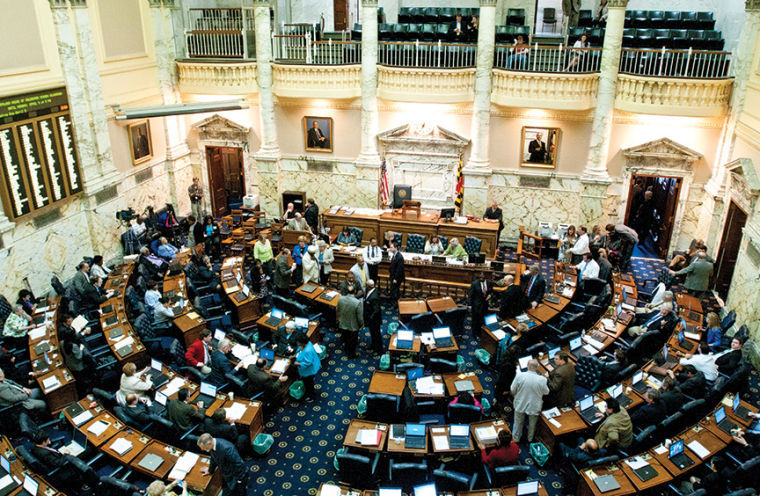 The Maryland House of Delegates on the last day of the 2012 legislature.

The Maryland House of Delegates on the last day of the 2012 legislature.

Public K-12 schools and higher education could see sweeping curriculum changes as lawmakers in Annapolis consider a bill aimed at bolstering the number of college graduates in the state.

The comprehensive proposal would require high school students to take four years of math, as well as assessing high schoolers to find those in need of extensive remedial classes in college, among other measures. The bill received widespread support from lawmakers and higher education officials for its core mission, but did raise questions in a March committee meeting.

The College Readiness and Completion Act of 2013 would work to keep students in college and on track to graduate. If the bill passes, students would have to complete a degree plan after 45 credits, and universities would reach out to “near completers,” students who are close to meeting graduation credit requirements when they drop out, through incentive programs and marketing campaigns.

“We cannot let these students spend their money, come in and then not finish,” said Bernie Sadusky, executive director for the Maryland Association of Community Colleges, an organization that supports the bill.

Another provision would provide financial aid to community college students transferring to four-year institutions. And several measures are targeted at helping students play catch-up while still in high school, limiting the number of remedial classes they would need later, co-sponsor Sen. Paul Pinsky (D-Prince George’s) said in a meeting with the Education, Health and Environmental Affairs Committee.

“Many students spend many dollars taking remediation classes in the higher education community … then the longer it takes, the less likely they are to graduate,” Pinsky said. “If we can reduce the amount of money and time it takes to do remediation — catch them earlier — it will be a benefit to everyone.”

Nearly 60 percent of this state’s community college students and 24 percent of students in public four-year colleges were enrolled in remedial courses in 2007, according to a report by the state Department of Legislative Services. This bill would create assessment programs to measure high school students’ needs and then provide them with transitional classes.

High schools would also require students to graduate with four years of math under their belts, including a minimum of Algebra II.

For some students enrolled in programs that entail a math-heavy course load, such as engineering, ensuring high school students enter college already competent in advanced math courses could help them graduate quicker. Senior civil engineering major Christopher Hopkins said a better math program in high school could have saved him a semester or two in college.

“I think if I would have been more prepared for that going into college, it definitely would have helped, and I wouldn’t be behind like I am now,” Hopkins said. “The math, coming in, definitely pushed back my graduation time.”

“Math is the one subject area that most students have to do remedial education in, so the whole idea is really attacking this issue,” said Sen. Richard Madaleno (D-Montgomery).

As a freshmen enrolled in letters and sciences, Charles D’Onofrio plans on becoming an aerospace engineering major and understands the importance of taking high level math classes. However, not everyone has his same aspirations, and he doesn’t believe the state should be requiring students to take on unnecessary math courses in high school.

“People who are trying to pursue a liberal arts major or something that’s not necessarily math focused, I don’t think they should be required to take math all four years,” D’Onofrio said. “A liberal arts major is probably never going to use calculus in their professional life.”