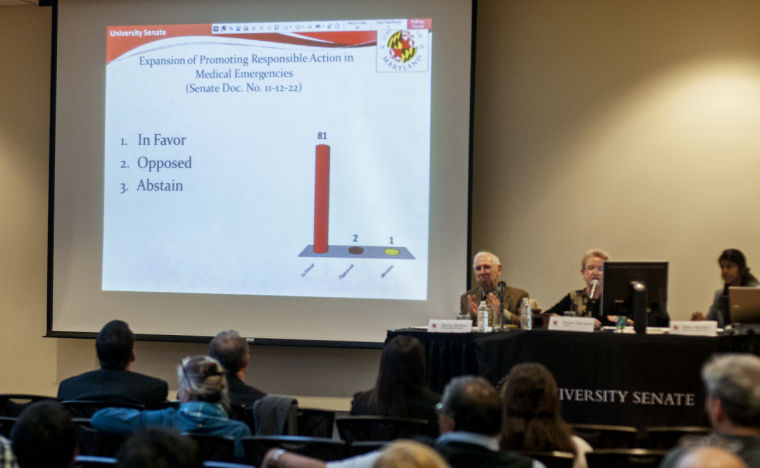 After proposing a measure nearly six years ago that would protect dangerously drunk students or students on drugs from university sanctions if they call 911 for themselves or a friend, the University Senate voted overwhelmingly yesterday to approve an all-inclusive Good Samaritan policy.

The policy first passed the senate in 2011, when it was amended to only include alcohol. But activists quickly mobilized to push for a policy that included all drugs, leading former undergraduate senator Brandon Levey to propose all-inclusive legislation more than a year ago. Now, after the senate’s 81-2 vote with one abstention, the measure will go to university President Wallace Loh for his signature.

“So many students and organizations put so much time into this the past five or six years, and we’re so happy that it passed,” Levey said.

In 10 minutes of discussion — during which only students conversed — no one spoke out against the policy, which advocates said will save students’ lives.

“If a student’s life is in danger, I don’t think it should matter what kind of substance put their life in danger,” said Stacia Cosner, a 2009 graduate who was the first person at the university to propose an all-inclusive Good Samaritan policy.

After a 10-month review and drafting process by the Student Conduct Committee, the Senate Executive Committee approved the bill for a vote at its meeting two weeks ago.

Jason Speck, the committee’s chairman, said there are potential exceptions to the all-drugs expansion but that the change is a positive policy and not too lenient.

“It is clear that the policy in its current, alcohol-only form is not a ‘free pass’ for alcohol users,” Speck wrote in an email. “Adding drug coverage to the policy does not change that.”

The drive for an all-inclusive Good Samaritan rule has roots that run deep in the university’s history, said Irina Alexander, a 2010 alumna and former undergraduate senator who also worked on the Good Samaritan policy.

In 1986, Len Bias, a former Terrapins basketball star, died of a cocaine overdose while celebrating his NBA Draft selection with friends in Washington Hall.

“That may not have happened had we had this policy in place,” Senate Chairwoman Martha Nell Smith said. “In fact, I think it wouldn’t have.”

The night Bias died in 1986, he had been using cocaine for several hours before friends called 911, according to police reports.

“All of his friends, all of his teammates hesitated to call for help while he was overdosing,” Alexander said. “It’s possible that he would have survived if people just weren’t afraid to help him.”

That’s why Cosner said she and others wanted the original policy proposal in 2007 to protect users of all drugs.

Senators, however, pushed back, worried about possible legal ramifications the university would face when dealing with illegal substances.

Alexander ran into the same issue when she took up the cause.

“We had all the data; we had all the student support,” she said. “All the students were in, and by the time I got involved, I just felt like the administration was really hesitating and didn’t know what to do next.”

An overwhelming majority of the student body, she found, already supported the idea.

“The fact is, overdoses and drug abuse, they happen,” Levey said. “It’s a sad fact, but we really need to see it as a problem, and we need to make sure that students don’t die.”

Those who supported the expansion had arrived at a uniform consensus for why: life.

“Effectiveness is impossible to measure before the fact,” Speck wrote. “But if even one life is saved, the policy will have merit.”

“The rationale behind having a Good Samaritan policy was removing that hesitation when there’s a life-threatening situation,” Cosner said. “We just think it’s a logical extension to protect people.”

Alexander, who served as president of this university’s chapter of Students for Sensible Drug Policy, agreed.

Smith said the expansion offers a critical update to the university policy.

“I’m thrilled that this passed,” she said. “We’ve needed it, and it’s very important.”