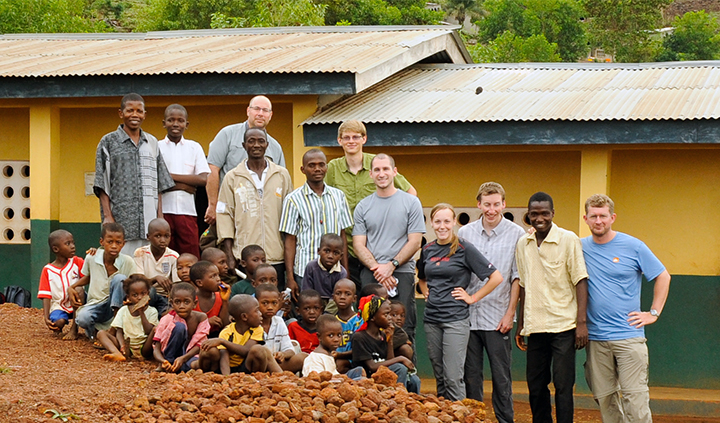 About 40 engineering students helped bring solar-powered lighting to Calaba Town, a western community in Sierra Leone, as part of a Madieu Williams Foundation project. The former Terp football team player and Redskins safety promised his mom if he ever became successful, he would help his home country.

About 40 engineering students helped bring solar-powered lighting to Calaba Town, a western community in Sierra Leone, as part of a Madieu Williams Foundation project. The former Terp football team player and Redskins safety promised his mom if he ever became successful, he would help his home country.

For years, if it was a cloudy day in the small western Sierra Leone community of Calaba Town, elementary school students would learn in a dark classroom.

But Washington Redskins safety and university alumnus Madieu Williams aimed to change that. Almost three years after donating $2 million to the university to create the Madieu Williams Center for Global Health Initiative, a project to provide solar-powered lighting to the village school is complete. The project was in line with a goal Sierra Leone native Williams carried since he was young, said Dahlia Levin, the Madieu Williams Foundation executive director.

Before leaving the country for Prince George’s County at the age of 9, Williams promised his mother he would help his home country if he ever became successful, said civil and environmental engineering professor David Lovell. And so successful he became.

Williams earned a family science degree from the public health school in 2003, Levin said, moved from the Terps football team to a successful NFL career and founded the Abigail D. Butscher Primary School in Calaba Town in 2009. He launched his first international project under the Madieu Williams Foundation, his 3-year-old organization focusing on youth, health and education.

He realized there was no sufficient water supply and missing lighting in the Calaba Town elementary school and offered the engineering school a joint venture, Lovell said. That was when the student group Maryland Sustainable Engineering came into play. Last fall, about 40 members started a project to bring solar power to the school, said Matt Smith, a senior chemical engineering major who became the project leader in January.

“It was the first international project for the student group,” Lovell said. “In our first meeting with Madieu Williams, we decided to work on a solar lighting system because it is generally easy to realize and he wanted to do it right away.”

The students spent five to 10 hours per week on the extracurricular project, Smith said. In June, an assessment team consisting of three students and three professional mentors traveled to Sierra Leone to gather data and in-depth impressions on-sight. The design team then took the information and designed final solutions.

“We did a lot of experiments to test the ideas we collected in our weekly meetings,” Smith said.

About one month later, six students and two mentors boarded a plane back to the country and installed the 1.5 kilowatt solar array that in the future will provide lighting to the school’s four classrooms, the principal’s office and the bathrooms. In addition, they installed wall outlets so staff can use computers.

“Being able to design something in the U.S. and install it overseas was great,” Smith said.

To provide storage for the system, the team included an 800 amp-hour battery array that can last several days without any power input from the panels.

To be as sustainable as possible, the team purchased most of the required materials in Sierra Leone. Apart from a few donated components, the project’s $57,000 cost was split equally between the engineering school and the Williams Foundation, Smith said.

“We all are thrilled with the results,” Lovell said.

After the project’s successful completion, Williams addressed the university in a letter, thanking participants for their support.

“Our partnership with the University of Maryland Engineers has been a huge success, better than I could have imagined,” he wrote. “The solar program project was a long time coming and it has truly been a pleasure working with such skilled professionals that share my visions of sustainability for Sierra Leone.”

The foundation already has plans for a secondary school in Sierra Leone that should break ground early next year.

“We are brainstorming many different ways UMD can incorporate the needs of the community and their expertise in Calaba Town,” Levin said. “The sky is the limit.”