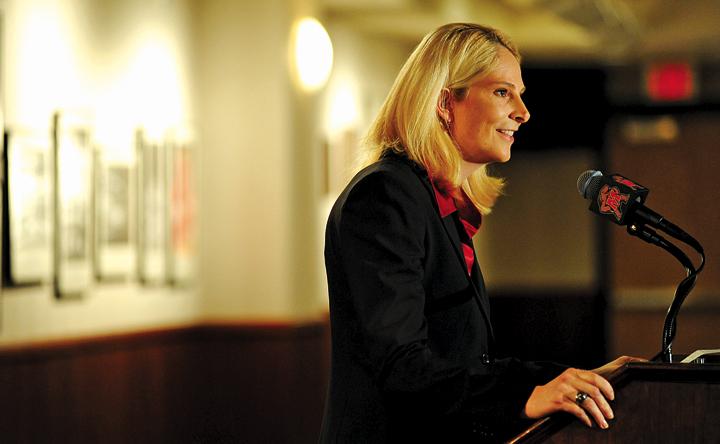 Coach Brenda Frese and the Terps are hosting a leukemia awareness event tonight as part of their game against Wake Forest.

Coach Brenda Frese and the Terps are hosting a leukemia awareness event tonight as part of their game against Wake Forest.

Mark Thomas isn’t sure what his neighbors think of his favorite activity with his twin sons, but few things stop him from propping the 2-year-old boys, Tyler and Markus Thomas, on his lap and letting them navigate his minivan through their Laurel neighborhood.

It was during one of these traditionally peaceful jaunts on Sept. 28 that Thomas’ cell phone rang. It was the family’s pediatrician, Dr. Cathy Parrish. She told Thomas to pull over.

A seemingly regular checkup earlier that day had produced news that would forever change the lives of Thomas and his wife of five years, Terrapin women’s basketball coach Brenda Frese. Parrish explained that a blood test had confirmed her fear: Tyler had leukemia.

“I didn’t have a concern in my mind [before that call],” Thomas recalled.

The next four months blurred the line between competition and compassion for Thomas, Frese and their family. As Frese’s life at home became increasingly intertwined with the lives she’d touched through basketball, she was again reminded that her extended basketball family — one composed of players and colleagues from a lifetime largely defined by her work with the sport — was just that: a family.

As the team looks for its fourth straight victory tonight, the game will take on special meaning — battling a disease that has forever altered the lives of Frese and her family.

“Life is an interesting experience because, in our daily lives, you can feel that the world is a cold place. There’s not always that kindness to your fellow man,” Thomas said. “All of a sudden, there’s this outcrying of selflessness of people you’ve never even met before. It really restores your faith in your fellow man.”

THE NEXT CALL Bringing Tyler to that September appointment had been nothing more than an afterthought for his father. It was Markus, whose fever-like symptoms the night before reminded him of the virus Tyler came down with three weeks prior, who he believed was sick.

“I figured I’d schedule something for them both because Tyler just hadn’t been right,” Thomas said.

That decision may have saved Tyler’s life.

Parrish immediately grew concerned with Tyler’s pale coloring and cuticles and acted — ordering the blood test that would confirm the diagnosis she already feared.The next thing Thomas knew, they were in the emergency room at Johns Hopkins Hospital in Baltimore. As he was bombarded with information on his son’s illness amid the chaos of the hospital, Thomas knew one unenviable task still lay ahead of him: He would have to call his wife, who was in Indiana on a recruiting trip.

“I had had a great day of recruiting and I was driving back to my hotel,” Frese said. “My husband called and told me to pull over, and that’s when he let me know that our son was diagnosed with leukemia.”

“Without question, the hardest phone call I’ve ever remembered making in my life,” Thomas said. “She’s in a rental car in the middle of nowhere and I’m in an emergency room, and there was nothing I could do to comfort her.”

Each feared the obvious worst-case scenario.

“Not knowing anything about leukemia, your first thought is, ‘Oh, my God. How long does my son have to live?'” Frese said. “You’re in a total state of shock. … I was hysterical.”

Frese flew into Baltimore-Washington International Airport early the next morning; Tyler was to go through his first series of treatment, which included the surgical insertion of a port into his chest to more easily administer medication and take blood samples. That day, Frese didn’t leave the hospital once. She remained there for the entire week Tyler spent there.

After 29 days of intense treatment, a spinal tap and analysis of a bone marrow sample revealed Tyler had acute lymphocytic leukemia (ALL), the most common form of leukemia in children and the most treatable form of the blood cancer. When he was diagnosed, the leukemia had already spread to 80 percent of his blood. Had it not been discovered when it was, he would have died within weeks.

“We were extremely fortunate,” Thomas said. “If you had to be dealt a card, ours was the most favorable. They could tell us now that he has a 90 percent chance of beating this thing.”

TEAM TYLER As Tyler and his family coped with his treatment, which included intense steroid and chemotherapy cycles, and settled back at home, Frese returned to Comcast Center — her second home.

“When I came back after that week, it was crazy,” Frese said. “I needed to come back to work for some kind of sanity.”

The ninth-year coach now faced the task of telling her team and the program’s alumnae of Tyler’s diagnosis. What would stem from those conversations proved nothing short of remarkable.

“Initially, when I heard that Tyler had leukemia, my first action was disbelief,” Harper said. “My second thought was we have to do something to support Coach B.”

Coleman and Toliver, like Harper, immediately thought to help.

“Kristi thought we should do a walk, and Marissa thought a tournament,” Harper said. “The very next day, I came to Marissa and said, ‘Why don’t we just do a foundation?'”

And so the Team Tyler Foundation was born.

The nonprofit aims to raise money to benefit childhood leukemia research and raise awareness of the disease.

“I was blown away,” Frese said. “Here’s two kids [in Coleman and Harper] that have their own careers and their own life, and to want to take on something this big is truly special. I never expected them to come up with the idea, and then to invest the time and money to get everything started … just blown away.”

Many of the first donations came from the women’s basketball community. Duke, Purdue, Loyola and UMBC all have contributed, and Harper’s hopeful the foundation can grow even more.

“This year, our biggest goal was to get the ball rolling,” Harper said. “Our ultimate goal is to make a difference and show that we’re serious about this. It’s not going to be a one-year thing.”

‘HE’S BEEN A CHAMP’ As Frese puts together what might go down as one of the finest coaching performances during her time in College Park — the Terps are ranked No. 14 in the country despite entering the season with a relatively inexperienced squad — Tyler continues to one-up his own opponent.

“Every checkpoint they’ve had, he’s aced,” Frese said. “He’s done really well. He’s only had to have like two blood transfusions, which is pretty low [for leukemia patients]. He’s been a champ.”

Frese said Tyler understands his chemotherapy-weakened immune system requires him to be wary of germs, but he’s able to administer his own medicine through his chest port. And as his tests continue to yield positive results, Tyler inches closer and closer to ridding himself of the disease.

But the road hasn’t always been smooth. Tyler often complains of pain in his hands and feet, a likely side effect of his chemotherapy treatment. At times, his temperature has reached the 100.6 degree limit that requires a hospital visit. And the steroid treatment has been perhaps the most traumatic part for Tyler, who added 10 pounds in 10 days to his approximately 30-pound frame during a steroid cycle shortly after his diagnosis.

“Steroids is just insane to watch [affect] a little kid. … One night he had 12 yogurts through the night,” Frese said. “The steroids alter your mood. He’s a lot more aggressive … and then he’s miserable.”

Monday, however, marks the beginning of what Frese hopes will be the last gruelling part of Tyler’s treatment. He will enter a five-days-on, five-days-off steroid cycle that will last six weeks, after which Frese hopes Tyler can enter a less strenuous “maintenance plan.”

Tyler will still face at least three additional years of treatment due to the acute nature of his illness. Any remaining leukemia cells in his system could trigger a relapse.

A NIGHT FOR AWARENESS While Tyler’s brush with mortality hasn’t seemed to affect Frese’s sideline persona this season — she continues to mix warm support with constructive criticism just as she always has — the veteran coach admits her approach to life has changed. She’ll occasionally duck out of her office early to spend more time with her sons. Other days, she’ll find herself lost in reflection.

“I do think now it gives me better balance,” Frese said. On Tuesday, “I was going recruiting, but I took an hour and took [Tyler and Markus] to the library.”

“One thing I’ve noticed is those days when [Tyler] was allowed to come back and run around, you could tell she would be looking off to the side just to make sure he was OK,” Kizer said.

Frese’s unwavering approach to preparation, though, has inspired the Terps, who enter tonight’s matchup with Wake Forest at 16-3 and 3-2 in the ACC.

“Tyler and Markus are like my little brothers, and I lost somebody to cancer, so it was definitely devastating,” Kizer said. “Having our mother-away-from-home going through that and how strong she was … I think that’s something we take from her.”

Tonight, the Terps, in conjunction with the Team Tyler Foundation and The Leukemia & Lymphoma Society, will host “Team Tyler Leukemia Awareness Night,” welcoming leukemia survivors to Comcast Center to help raise awareness for the disease and raise money through the sale of Team Tyler T-shirts and wristbands.

Harper, the lone founder of Team Tyler who isn’t playing professionally overseas, will also present Johns Hopkins Hospital, where Tyler continues to be treated, with the foundation’s first donation.

The crowd will catch their first glimpses of the Terps’ redesigned warm-up jerseys, which now feature green and orange ribbons in support of leukemia awareness.

But Tyler and Markus won’t be there to see it.