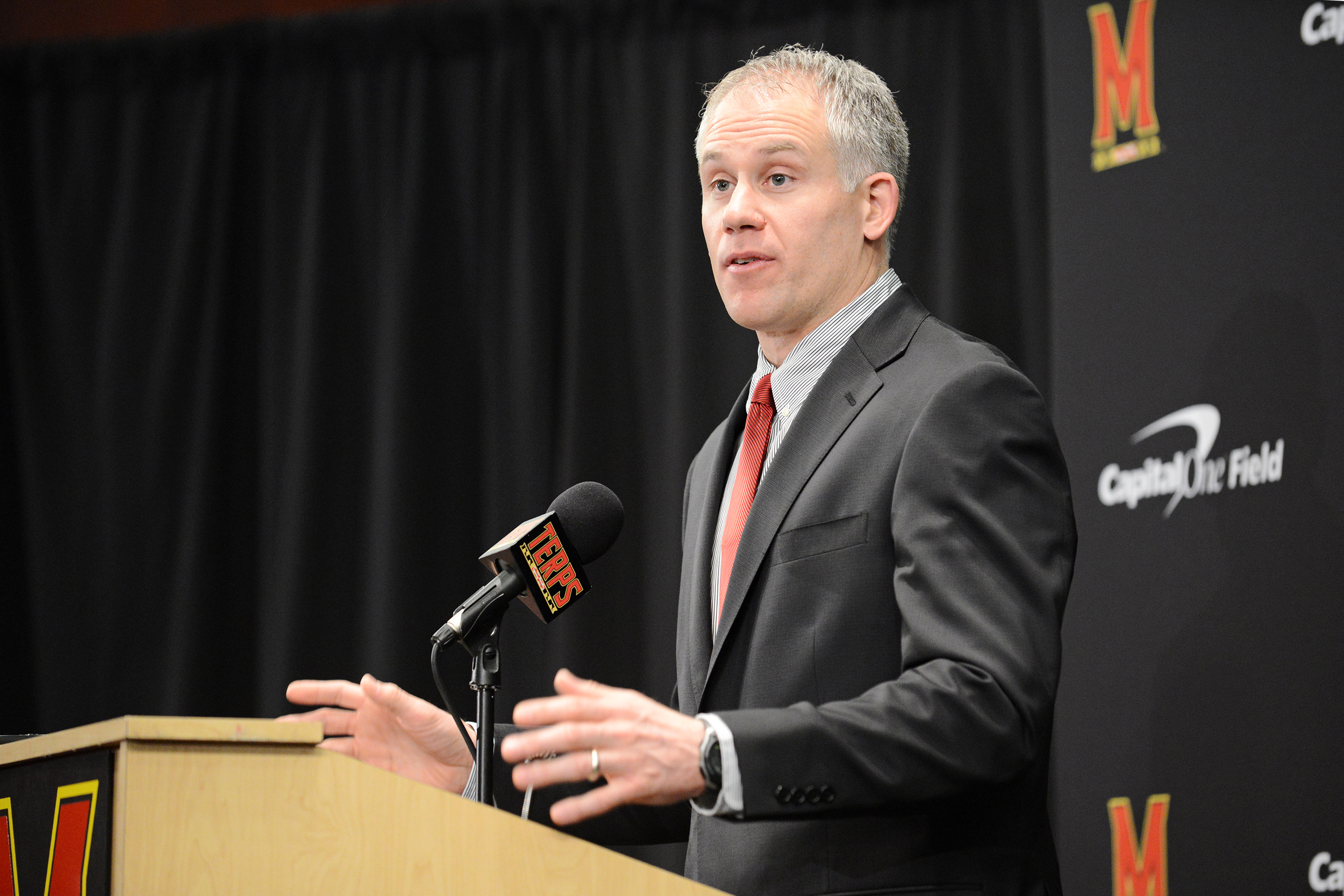 Head coach D.J. Durkin fields questions from the media during his press conference on National Signing Day in Gossett Field House on Feb. 3, 2016.

The duo, once considered the crown jewels of the Terrapins football team’s 2016 recruiting class, weren’t spoken of during coach DJ Durkin’s National Signing Day news conference yesterday. The local products, who previously verbally committed to the Terps, spurned their home-state school for Ohio State 17 days ago.

Yet in the days after the hyped recruits vowed their allegiance to Buckeyes coach Urban Meyer, something special happened in College Park. With Winter Storm Jonas dumping about 2 feet of snow in the Washington area two weekends ago, Durkin said many schools canceled their recruiting visits. Not the Terps.

“We had the roads plowed from here to the hotel right here on campus. Everything else was snowed in, but there was a path to go back and forth,” Durkin said. “We spent a lot of quality time together.”

It allowed the coaching staff a chance to bond with recruits. Elijah and Elisha Daniels, twin defensive backs from Davie, Florida, even offered a duet of “My Girl” by The Temptations.

Durkin probably would have preferred that Haskins and Jones keep their commitments. But he didn’t let the bad news prevent him from forging relationships with his new players, whom he was thrilled to speak about in Glazer Auditorium yesterday.

“We got to know each other better than ever before in recruiting,” Durkin said. “Usually there’s so much going on. You’re going to eat here, do this, do that. … We were all kind of here, snowed in together, just having a good time together.”

Durkin’s mouth could hardly keep up with his brain yesterday, as he spoke quickly and eagerly of the Terps’ 23 signees. He stumbled over his words at times, but his excitement never wavered.

The new coach offered the highest praise of the day for quarterback Tyrrell Pigrome from Pinson, Alabama. The 2015 Gatorade Alabama Player of the Year recorded 62 touchdowns as a senior — 44 through the air and 18 on the ground.

“I don’t know if you guys have watched his tape. That guy is electric,” Durkin said. “He’ll be a household name around here real soon.”

The Terps certainly hope Pigrome lives up to that billing. After verbally committing to the program in May, Haskins spoke of turning around a floundering program and encouraging fellow in-state players to join him in College Park.

His presence became even more valued last season, as quarterbacks Caleb Rowe and Perry Hills helped combine for a nation-leading 29 interceptions. For many, Haskins was a savior.

That’s in the past now. Haskins is gone, only to set foot in Maryland Stadium for conference games with buckeye leaves adorning a silver helmet.

Durkin and his staff were still able to haul in some notable local players, though. Running back Lorenzo Harrison, wide receivers DJ Turner and Tino Ellis and offensive lineman Terrance Davis all come from DeMatha.

“It’s been some time since there has been a DeMatha guy in this program. I can tell you one thing, we are going to be going back there next year, too,” Durkin said. “Those are all guys that are top-notch football players that could’ve gone to a lot of places, and we were able to keep them right here at home.”

“[McLean] has excellent pass-rush skills and can really push the pocket,” associate head coach Mike London said. “Adam can also use his strength to be a force in stopping the run.”

Durkin also championed the team’s success in Florida. The team hauled in seven players from the state.

“We kind of view Florida maybe as our second home,” Durkin said.

The Terps also reeled in prospects from Alabama, Georgia, Indiana, Ohio and Australia.

But for Durkin, luring 10 players from this state proved his greatest accomplishment.

“In the past, our guys have continued to spread out and go to different places,” Durkin said. “It’s our job to build a program, put a product on the field that guys can be proud of. And where all those guys from here will want to come play for the hometown team.”