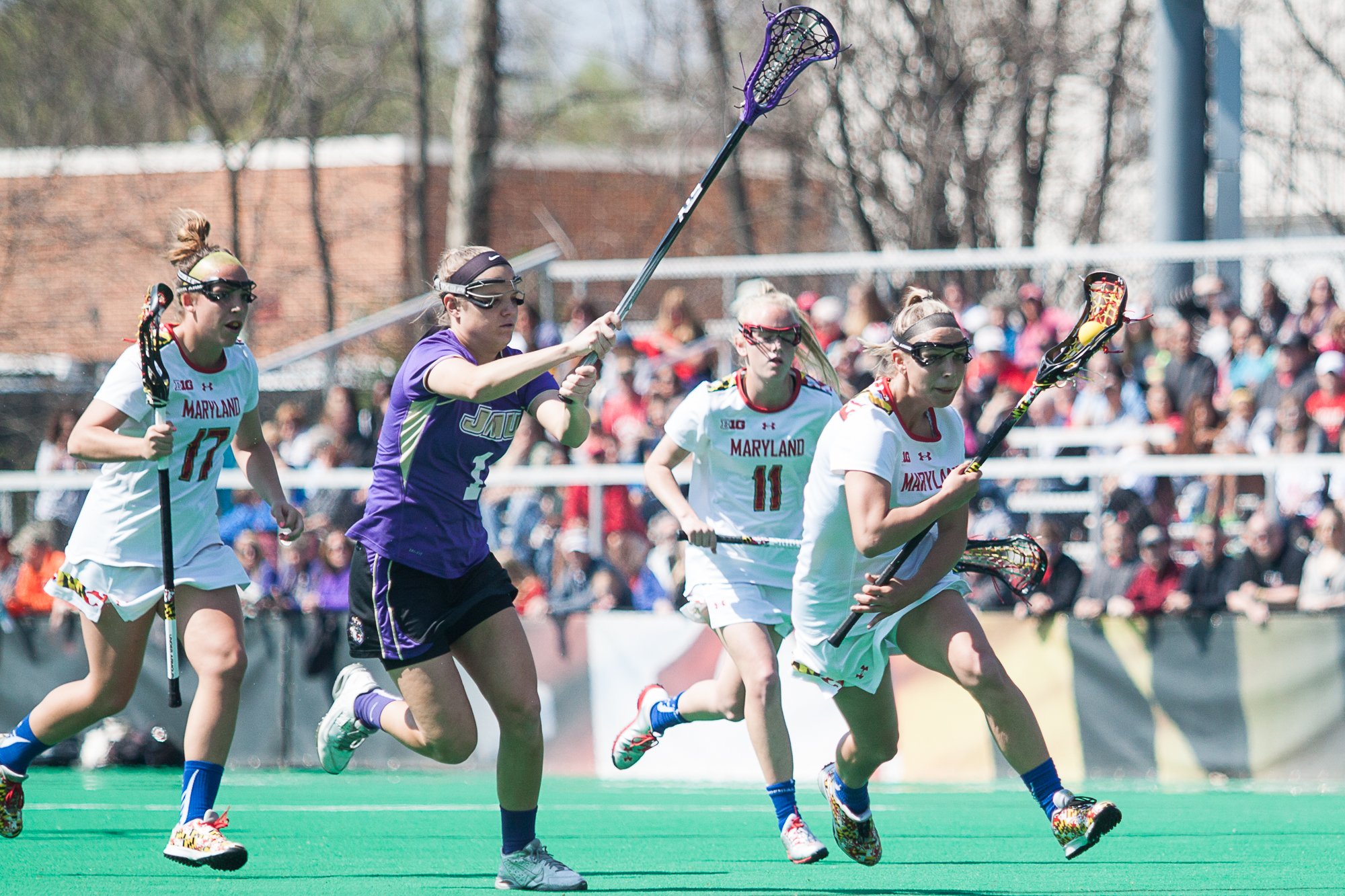 Defender Morgan Torggler drives the ball up the field before halftime during the Terps' 12-3 game against JMU at the Field Hockey & Lacrosse Complex (Reid Poluhovich/The Diamondback).

Maryland women’s lacrosse has the nation’s top-ranked offense entering its game with Virginia on Wednesday, but its defense has also had its share of success.

Defenders Alice Mercer and Nadine Hadnagy, along with goalkeeper Megan Taylor, headline a unit that ranks fifth in the country in terms of goals per game. And in its 15-5 win over Ohio State on Saturday, the group took another step forward.

“We played as a team on the defensive end, and that’s probably the first game that we’ve been able to do that,” defender Morgan Torggler said. “We need to really focus on that.”

The Terps allowed the Buckeyes to score two goals in the opening minutes before stifling their opponent’s attack. Ohio State scored just once in the second half, a defensive performance the Terps hope to replicate against the Cavaliers in a rivalry coach Cathy Reese said “has the most tradition of any two teams in women’s lacrosse.”

“We’ve come so far since our first game in February,” Reese said. “This group is really playing together well.”

At times this season, though, the Terps have had difficulty stopping opposing offenses.

Against Johns Hopkins, they trailed for most of the night and allowed midfielder Dene’ DiMartino to score five goals in the Terps’ eventual 10-8 win. The Terps quickly found themselves playing from behind before rallying past Cornell, 17-9.

Still, the defense has been strong overall, allowing just more than six goals per game. The Terps have allowed a combined 14 goals in their last three wins, and they have yet to allow an offense to score 10 times.

And while the Cavaliers are averaging 10.79 goals per game, the Terps’ defense views the contest as another opportunity to improve.

“I know they play great competition day in and day out,” midfielder Caroline Steele said. “It will just be another challenge.”

She anticipates Virginia will keep the ball for lengthy periods during each possession, a strategy several clubs have used when facing the Terps this season.

But that will change the defense’s approach.

“They’re our old rivals from ACC play, so obviously we want to come out and beat them,” Torggler said. “No team can beat us if we’re playing together and well.”