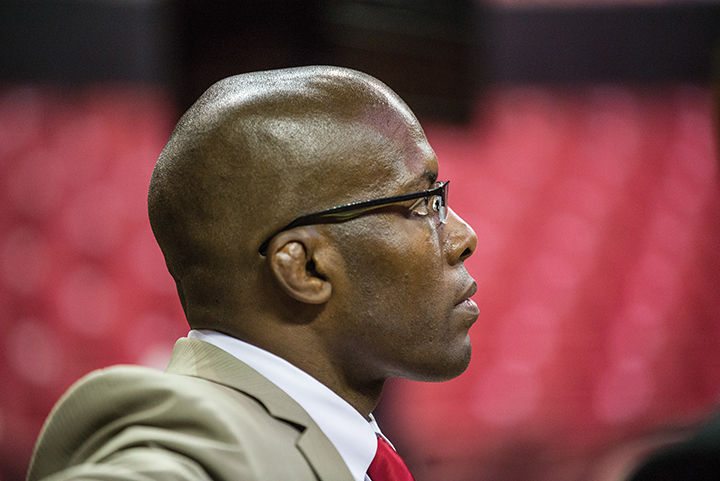 When Maryland wrestling coach Kerry McCoy thinks about his Olympic experiences, the opening ceremonies stand out most.

McCoy remembers the pride of representing his country and family on the sport’s biggest stage, walking through the arenas with athletes from other nations and realizing the power of unity under the Olympic flag.

“Something that’s so special that only gets to happen every four years,” McCoy said. “That’s something I’ll never forget.”

“That many people, [that] many countries all uniting on one Olympic front,” Valmon said. “You can read about it, you can watch the TV, but unless you really experience it, you’ll never know how big that stage

McCoy made his Olympic wrestling debut at the Sydney Games in 2000, finishing fifth. He then placed seventh in the Athens Games four years later. Valmon, meanwhile, won gold medals as a member of the U.S.’s 4×400 relay teams in the Seoul Games in 1988 and the Barcelona Games in 1992.

For both coaches, their initial experience helped build perspective for their returns.

McCoy arrived in Sydney with what he called “tunnel vision,” only focused on his competition. While he maintained the same drive through the next four years, McCoy wanted to better appreciate the Olympic atmosphere in Athens. He mingled with other teams and athletes in the Olympic Village and watched other competitions.

“It’s one of those catch-22s,” McCoy said. “You want to realize, ‘Hey, this is the Olympic Games. This is a very important event.’ But at the same time, you want to makes sure you take it [in].”

Valmon wanted to leave his second games with “no regrets,” a mantra he repeated while pushing himself to train harder and develop a better nutritional plan. Though he grew up in New Jersey and classifies himself as an “East Coast person,” he moved to Jonesboro, Arkansas, to limit distractions during his training. He later moved to San Francisco to seek top coaching.

“If that’s what it took,” Valmon said, “that’s what I was going to do to be the best I could be.”

Their second Olympics as athletes, though, wasn’t the end of their international involvement, as they both served as head coaches in their respective sports. McCoy was on the coaching staff for the 2008 freestyle wrestling team in Beijing, and Valmon led the men’s track and field delegation in the 2012 London Games.

McCoy wanted to create a support system for the wrestlers, so he valued tasks such as returning to the village to pick up an athlete’s forgotten items with the same importance as the critiques he imparted on the mats. He and the assistants took an individualized approach to the athletes’ preparations.

Transitioning into his Terps career after the games ended, McCoy tried to do the same. The team now focuses on goal-setting for group and individual achievements.

Former Terps wrestler Jimmy Sheptock, now an assistant coach with the program, worked toward winning a national title as a senior in 2014. McCoy coached him through one-on-one meetings and a tailored training plan that saw Sheptock assemble an undefeated run before placing second at the NCAA championships.

“When you’re at that level, [you] see everybody doesn’t have to do things the exact same way,” McCoy said. “The actual strategies, tactics and plans, they vary from person to person, so that’s one of the biggest things to take away.”

Valmon also used his experience as a college coach in approaching his Olympic athletes. As the coach of the men’s side, he worked with women’s coach Amy Deem, who leads the Miami program, to create a “Team USA” feel, rather than separating the competition.

He also deferred to the athletes’ private coaches in some workouts — so as not to disrupt their training plans — and limited team meetings close to competition times. If he saw an athlete in the cafeteria late at night, he didn’t crack down, understanding their longtime routine might be different.

This time around, neither McCoy nor Valmon will be involved with the U.S. Olympic team. But they both said they’ll be watching when the games begin with the opening ceremonies Friday night, one of the crowning moments in the coaches’ Olympic memories.

“The Olympics is the pinnacle of everything because the whole world is there,” Valmon said. “It’s the one time that everything is put aside for the common cause of just competition.”