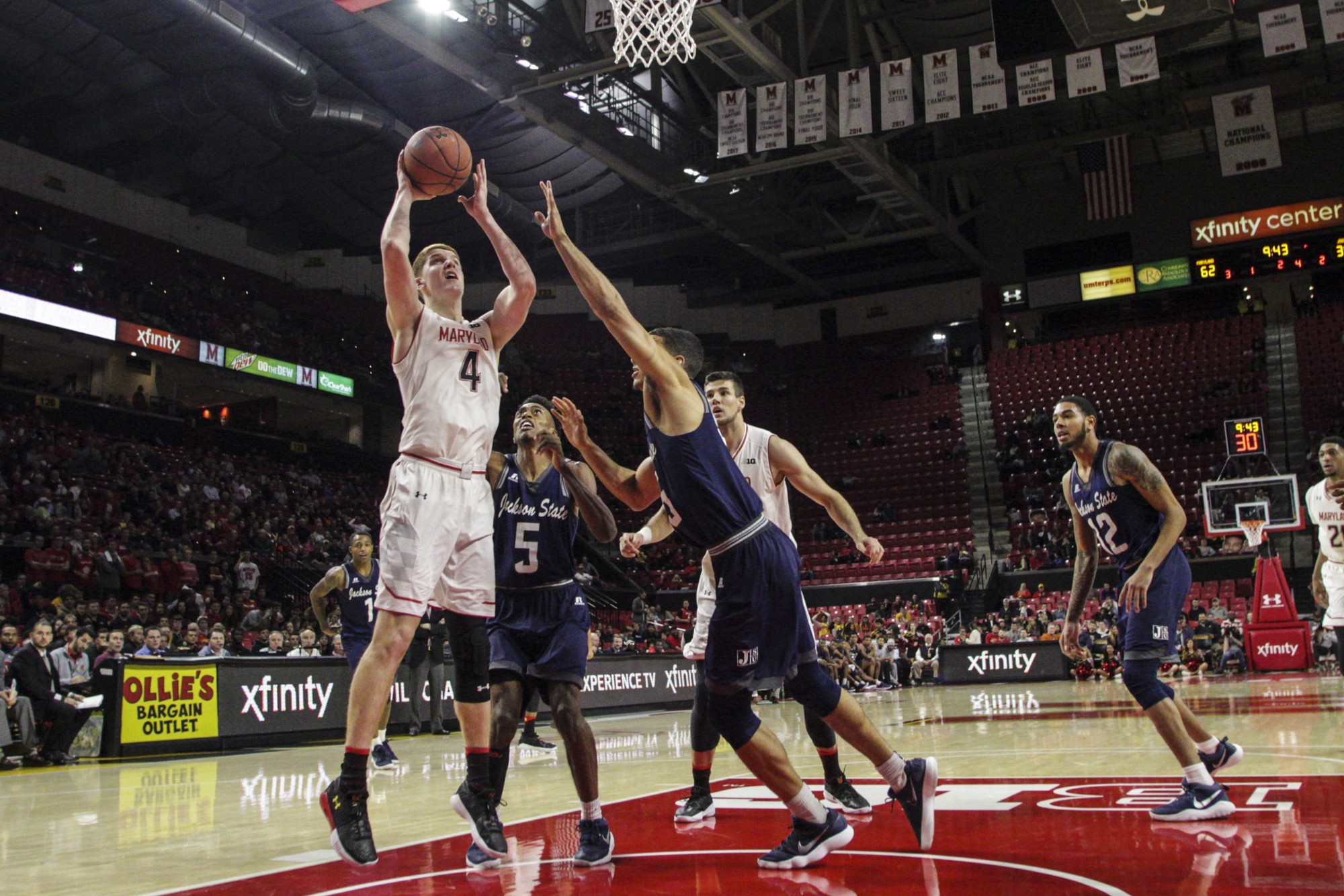 Forward Justin Jackson sat on the Maryland men’s basketball bench in black sweats Friday night, forced to look on and contribute only through high fives and words of advice as his team played the worst half of its season.

After Melo Trimble’s departure for the NBA this past offseason, Jackson was supposed to be the face of the team following a strong freshman season and gaining experience at the NBA Draft Combine.

But Friday, Maryland was playing its first game since coach Mark Turgeon announced Jackson would miss the remainder of the season with a torn labrum. The Terps are in search of a new face of their team capable of leading them to their first NCAA tournament without Trimble since 2010.

Guard Kevin Huerter, another sophomore leader, made his case for that role in the second half of Maryland’s 66-45 win over UMBC. He scored 16 of his 20 points after intermission to lead Maryland back from its error-filled start.

“He has to shoot more for us to be successful,” Turgeon said, “and he knows that.”

The Terps (12-3, 1-1 Big Ten) appeared to miss Jackson in the first half, shooting 23 percent and committing 10 turnovers as they entered halftime trailing by six. UMBC (8-6) hardly beat the Terps with their own prowess, pairing seven turnovers with 30 percent shooting in the first half.

“It was hard to watch on the bench,” said guard Anthony Cowan, who recorded 14 points, nine rebounds and seven assists.

Before Maryland jogged onto the court for the second half, Jackson again could only watch as assistant coach Bino Ranson yelled at his squad. But there was Huerter, joining in on the encouraging statements.

Huerter sunk consecutive 3-pointers during the opening two minutes of the second half to tie the game, and his dunk off guard Darryl Morsell’s inbound pass out of the under-16 timeout capped Maryland’s 16-5 run to begin the second period.

“We’re guys who are going to have to bring it every single night if we want to win games,” Huerter said.

While Maryland looked like a rejuvenated team in the second half, the Terps still struggled to take care of the ball, committing 15 giveaways. Also, forward Ivan Bender exited with a knee injury in the second half, Turgeon said to Fox Sports 1, which would be a serious blow if his setback is serious.

The Terps don’t have much time to sort out their issues, as they resume Big Ten play against Penn State on Tuesday before visiting No. 2 Michigan State on Thursday.

“We can’t start off these games the way we did,” Huerter said, “and expect to win in the Big Ten.”