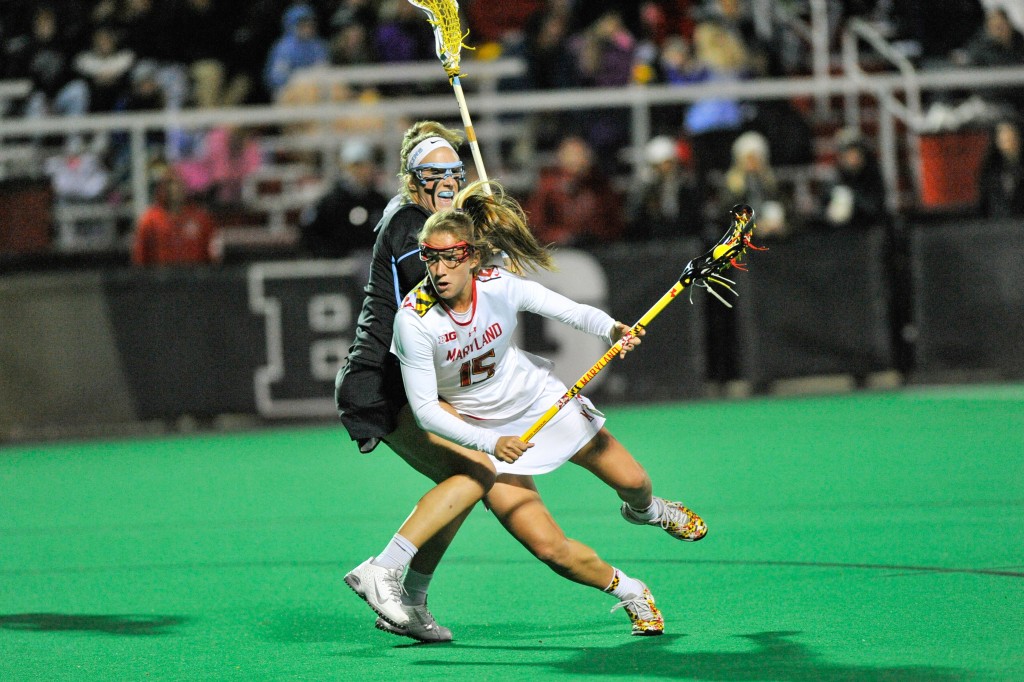 The song, which has featured in the Terps’ post-score musical rotation since at least last season, foreshadowed their ninth consecutive Final Four trip. They’ll face No. 4 seed Penn State in Foxborough, Massachusetts, at Gillette Stadium on Friday.

“We’re really excited to be heading up to Boston,” coach Cathy Reese said. “We want to just keep rolling, keep doing what we’re doing and playing our brand of lacrosse.”

With a semifinal victory against the Nittany Lions, No. 1 seed Maryland’s seniors would clinch their fourth career title game appearance. Given that experience, the Terps will look to fourth-year captains Zoe Stukenberg and Nadine Hadnagy for leadership in the Final Four.

In the quarterfinals against Stony Brook, Maryland (21-0) came back from its largest deficit of the season behind its senior starters. At one point, Reese called a timeout and delegated instructing duties to Stukenberg and Hadnagy, trusting them to lead the turnaround against the Seawolves.

After trailing by four midway through the second half, the Terps clawed back to win, 13-2, in the their tightest game of the year.

Maryland’s next-closest contest was its two-goal victory over Penn State (17-3) on April 20. In that game, Stukenberg notched a goal and two assists from the midfield to push the Terps in front of the Nittany Lions for good early in the second half.

“[Stukenberg and Hadnagy] are great leaders,” sophomore goalkeeper Megan Taylor said. “Everybody looks up to them on and off the field. I wouldn’t want to have any other captains.”

Reese has been impressed with the way her team’s veterans have taken over after losing several key seniors from last season. When three-time Tewaaraton Award-winning midfielder Taylor Cummings and IWLCA Defender of the Year Alice Mercer departed, Stukenberg and Hadnagy stepped up in their absence.

Reese also said the duo has distanced the Terps from the team that fell short in the national championship game a year ago.

“[Stukenberg and Hadnagy] have really taken control of this group,” Reese said. “Everyone has stepped up in a different way and we’re a new team. We’re different than we were last year, but I’ve got to give the players all the credit.”

When asked about her leadership role, Stukenberg complimented the Terps’ underclassmen. She called them a self-motivated, passionate group and said she believes in them to “do what needs to be done.”

She also recalled a moment from her own freshman year when, in the national championship game against Syracuse at Johnny Unitas Stadium in 2014, she shook with nerves before taking the field.

From that experience, Stukenberg learned the importance of alleviating tension for inexperienced players before this year’s Final Four. She hopes to keep things “loose and fun” and make sure the underclassmen know they have support as they push for another title game bid on Friday.

“This group makes leadership so easy,” Stukenberg said. “They don’t need a firm hand to guide them or me to look them in the eyes and tell them how important it is to give 100 percent during these moments … I can feel how badly they want this for us.”