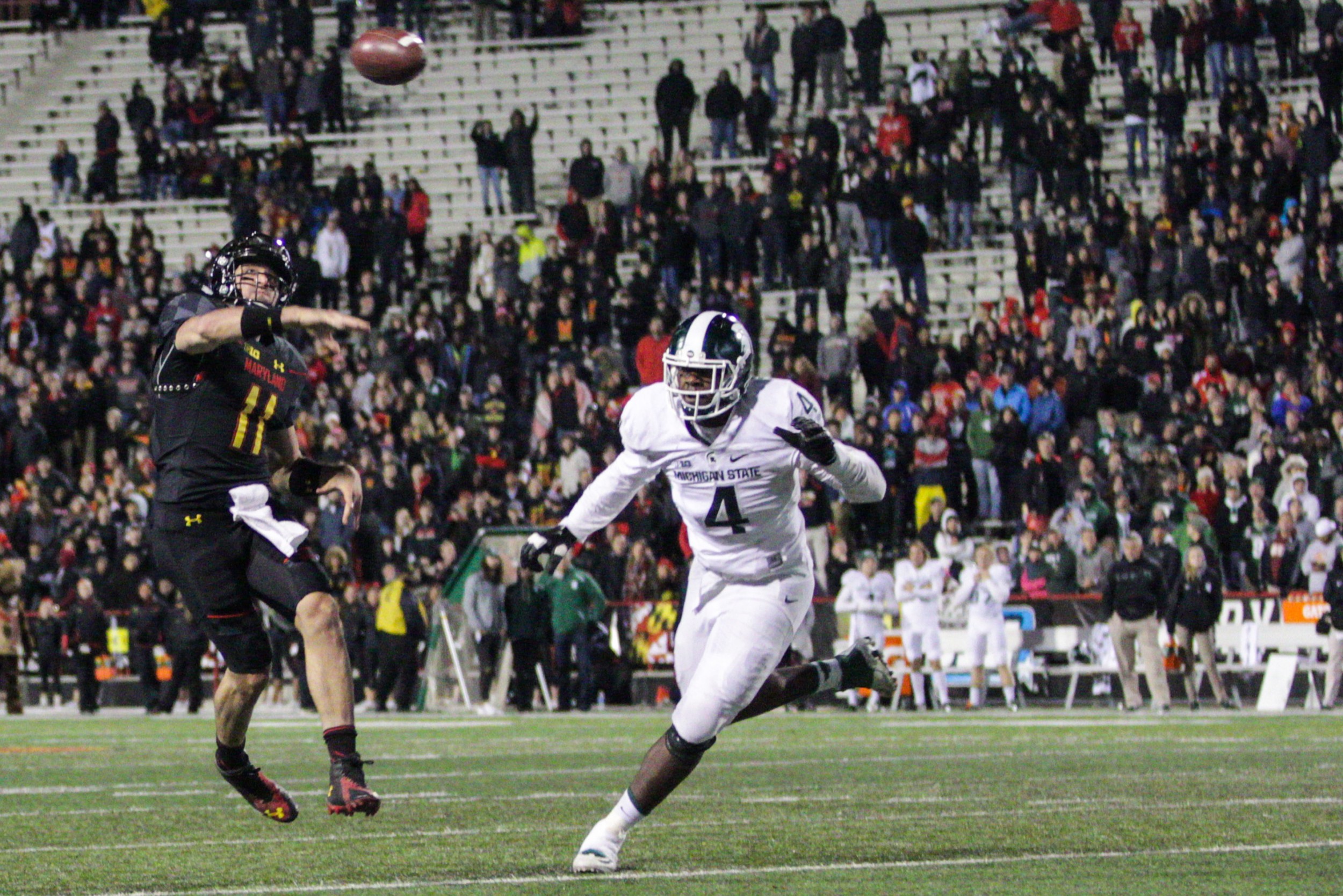 With less than four minutes left in the Maryland football team’s game against Michigan State on Saturday night, quarterback Perry Hills jogged off the field. Amid a raucous crowd at Maryland Stadium celebrating his second touchdown pass, the redshirt senior and coach DJ Durkin shared an embrace.

The coach didn’t declare a starting quarterback throughout the week as Hills continued to rehabilitate a right shoulder injury he suffered in the first half against Penn State on Oct. 8.

But Hills took the opening huddle about three hours earlier and posted 200 yards while completing 21 of his 27 passes. The last was a nine-yard toss to wide receiver Levern Jacobs, sealing the Terps’ 28-17 win and warranting a message from Durkin.

“I told him he’s a tough son of a gun,” Durkin said, admitting he might have used a few different words. “I told him I love him.”

“There’s a lot of guys that wouldn’t have even played, you know, and not only did he play, but he played really well.”

Surrounded by reporters in the Gossett Team House Auditorium after the game, Hills said he anticipated all week he would play against the Spartans. When he woke up Saturday morning, the redshirt senior said he felt much better than before last week’s loss to Minnesota when he stood on the sideline in a red ball cap and watched reserve Tyrrell Pigrome manage the huddle.

But Hills, a former high school wrestler who has displayed a penchant for collisions throughout the season, scaled back a bit. Rather than lowering his pads to square off with a defender for a few extra yards, he made a concerted effort to slide or step out of bounds.

“Definitely trying to protect myself,” Hills said, “instead of just running into linebackers.”

On their second offensive snap, Hills dished a lateral pass to wide receiver D.J. Moore, who heaved the ball to running back Lorenzo Harrison, who was streaking open down the sideline.

The sophomore thought the wind might carry his pass, and it did, landing a few yards out of Harrison’s reach. Nevertheless, the call mirrored Durkin’s instructions: “Empty the chamber.”

“I want our players to know that we’re not just talking about it — we are about it,” Durkin said. “So that’s what we did, just went out and let loose.”

Hills managed the running game with Harrison and running back Ty Johnson each surpassing the 100-yard mark, the first time two Terps rushers have done so this season. Plus, six of Hills’ passes went for at least 15 yards.

The longest was a 36-yard touchdown to Moore midway through the second quarter. The Pittsburgh native launched the pass to Moore, who had juked his defender and ran wide open with no Spartans safety over the top.

Moore said Hills’ return helped the Terps find better balance on offense. When Hills’ passing progressions weren’t open, he pulled the ball down to run. He netted 20 yards on seven carries as part of a performance that Durkin said proved Hills is “as tough as they come.”

That’s what the first-year leader reminded his signal caller after the punctuating score.

“He’s about this team,” Durkin said. “and whatever he has to do to help us win.”