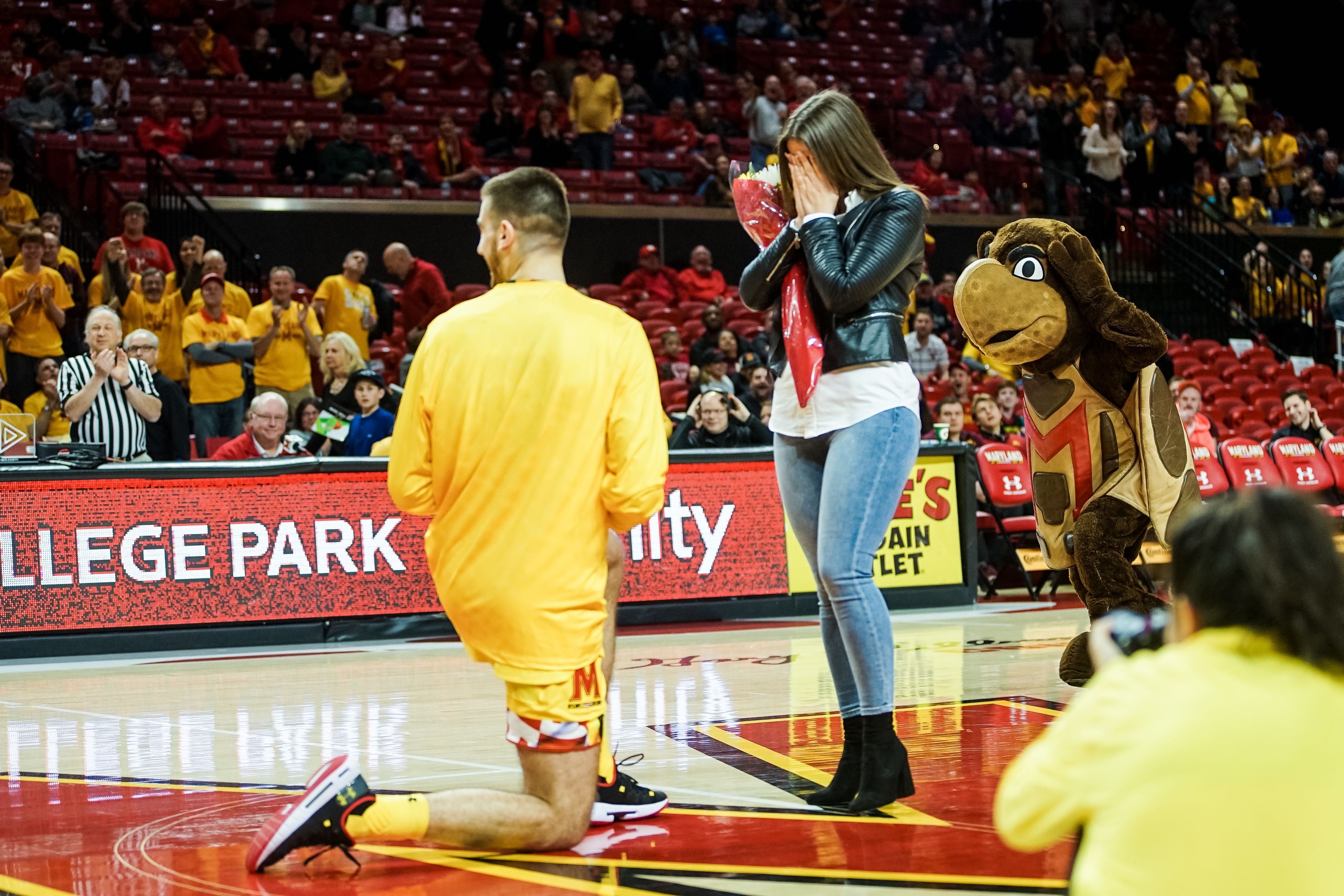 Turgeon then reached into his left pocket and, unbeknownst to nearly everybody at Xfinity Center, pulled out the ring box that Bender had handed off to him before the team’s shootaround in preparation for Friday’s game.

It wasn’t until about 15 seconds later, when Bender dropped to a knee, that Knežević and the rest of his teammates and the crowd realized that Bender was making sure his Senior Day was an unforgettable one.

Bender stole the spotlight from Andrew Terrell’s towel-waving antics by proposing to Knežević (she said yes), surprising his teammates and giving a jolt of energy before the Terps’ 69-60 win over the Golden Gophers.

“I had a few ideas [for how to propose],” Bender said. “This one seemed the best, and I’ve always wanted to do it here because this is my second home for four-and-a-half years.”

Ivan Bender of @TerrapinHoops got on one knee as he was honored before tonight's game: pic.twitter.com/PPNAC2ppew

Bender and Knežević have been together since before the Bosnia and Herzegovina native came to College Park. She helped him during his early days as he was trying to learn English.

And for the last couple of weeks, she has been with him in College Park, pestering him about when he was going to pop the big question.

“She was very — I don’t know — boring and annoying,” Bender said. “She kept asking questions about it, but I couldn’t tell her. She’s now happy that I didn’t say anything [and] it all worked out. But she was annoying.”

Turgeon was one of just five people in the building who knew about Bender’s plans, the senior said.

“Keeping teammates in the dark was hard,” Bender said. “But seeing their reaction was priceless.”

When Bender took a knee, the rest of the Terps immediately started jumping toward Bender at midcourt before realizing they should probably wait until she answered.

After she said yes, the celebration began anew, and forward Jalen Smith credited Bender for the 19-point outing Smith embarked upon after the tipoff.

“It was Ivan’s proposal that kind of fired me up,” Smith said. “I was already hyped. I was like, ‘might as well carry it over.’”

And for Bender, the proposal likely erased any potential pain stemming from his three-foul, six-minute game.

“I am just so grateful [Turgeon] said yes and allowed me to do it,” Bender said. “It was a special moment.”