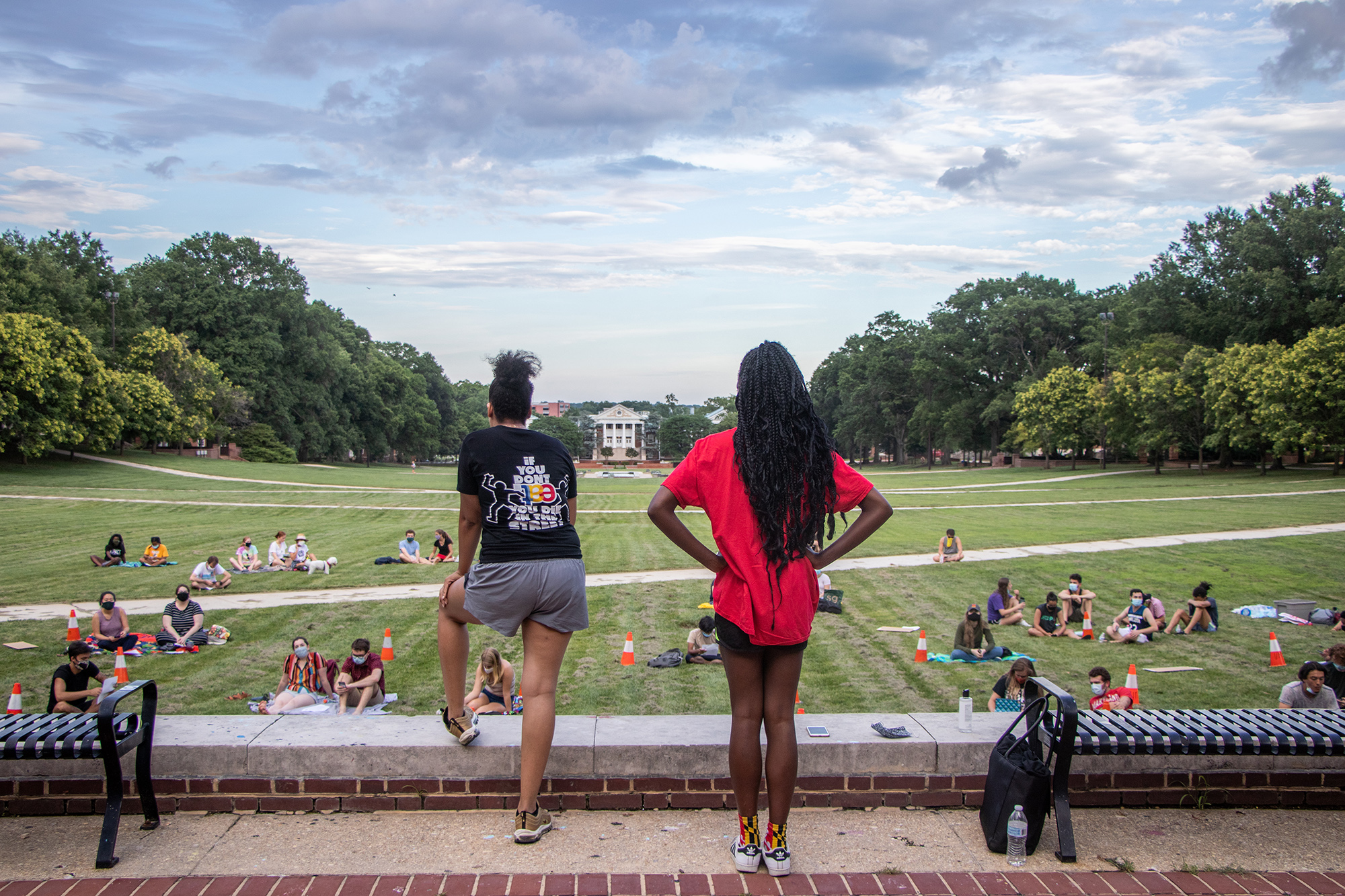 As the sky turned pink behind the University of Maryland’s Miller Administration Building Thursday evening, a masked crew of students gathered at the top of McKeldin Mall. Though some clustered in groups on picnic cloths, most kept their distance from one another — sprawled out around traffic cones spaced six feet apart on the lawn.

Caution in the face of the ongoing coronavirus pandemic swam at the forefront of the latest event held by Black Terps Matter, a coalition of Black students, faculty and staff fighting to dismantle systemic and institutionalized racism on and off-campus.

The organization required attendees to agree to follow safety guidelines, such as wearing a mask at all times. Students also spoke through their cell phones, connected to Bluetooth speakers, instead of passing around a microphone.

But despite the health risks presented by the pandemic, dozens of students, alumni and faculty members turned out to learn more about Black Terps Matter and the group’s 10 demands.

“This is an opportunity for people to show that they are standing with us,” said Saba Tshibaka, one of the coalition’s leaders. 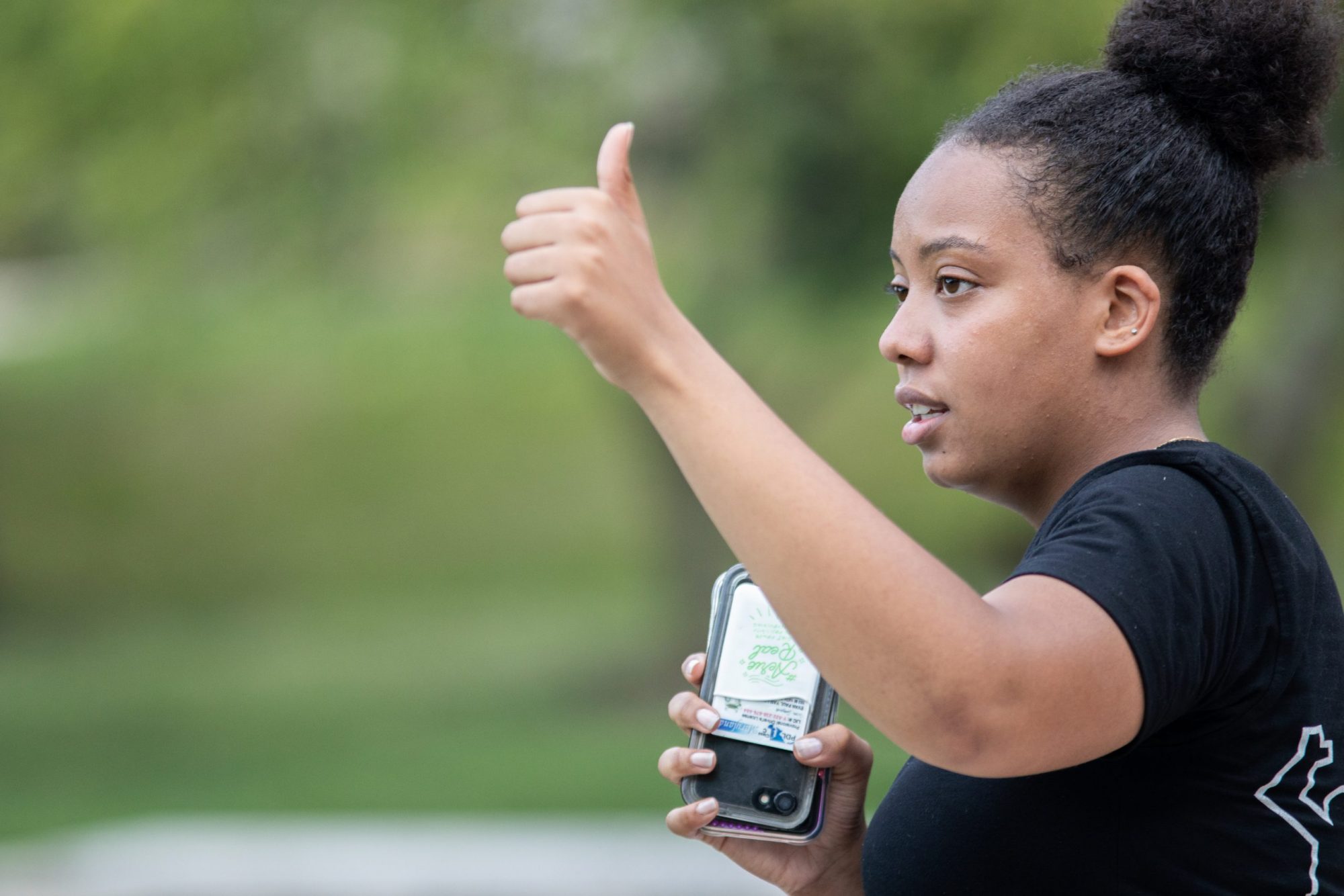 Among the coalition’s demands include calls to implement mandatory, annual racial bias trainings for campus community members and student organizations, decrease the presence of University Police in dorms, create a racial incident hotline for the Counseling Center and memorialize 2nd Lt. Richard Collins — a Black Bowie State student who was murdered in 2017 on the campus by a white former student of this university.

Additionally, the group wants the university to incorporate topics surrounding race into the curricula for all entry-level courses and make AASP100, Introduction to African American Studies, a required course for all students. Tshibaka emphasized that doing these things would “reflect the contributions and accomplishments of minorities.”

“We’re encouraging faculty and staff members to have conversations with their departments about how we can incorporate race and ethnicity education into every single department,” she said.

Georgina Dodge, this university’s diversity and inclusion vice president, also attended Thursday’s teach-in to hear students’ concerns. Although she agreed that issues of diversity should absolutely be “infused” in the curriculum, she said she’s not sure AASP100 should be a required course for all incoming students.

“I know that sometimes students don’t take from required courses what we hope they’re going to take from them,” she said. 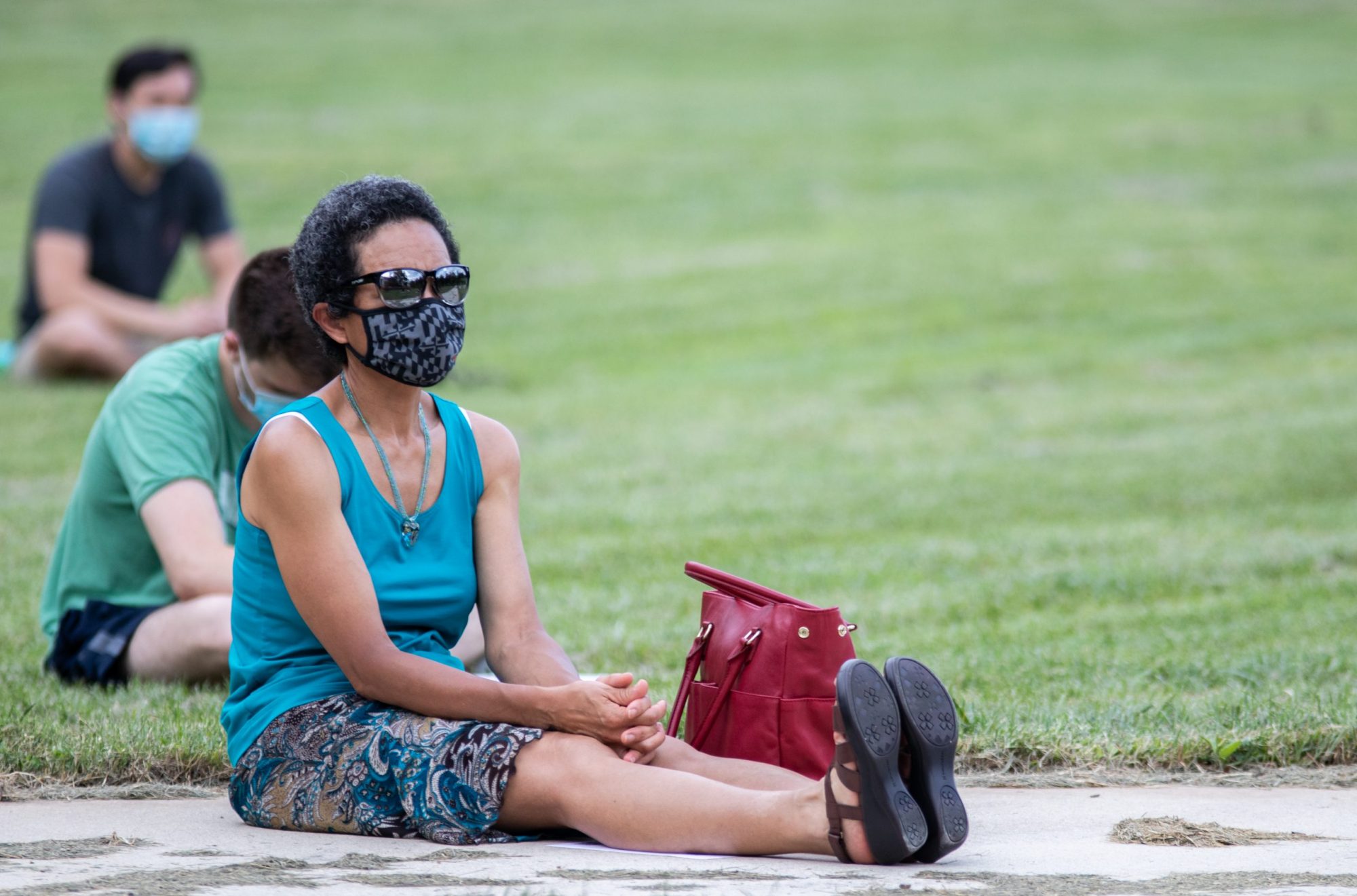 Nyumburu Cultural Center, which is often described as a “hub” of Black life on the campus, is one of the most well-known spaces on campus dedicated to Black students. And yet, when the teach-in’s organizers asked those in attendance to raise their hands if they had been shown Nyumburu on a campus tour before coming to the university, only a handful of students did so.

On Thursday, Conway pitched hosting safe spaces for Black students at each school on campus.

Dodge voiced her support for the creation of more safe spaces. However, she raised doubt over whether defunding the school’s police department was necessary to realize that goal. There are other ways to budget for that, she said.

“I don’t think it’s a zero sum game,” she said, adding that she wants police officers at the university to be able to afford living in the community. “I want police who are invested, police who see me as their neighbor, not as some pain and not some problem they have to deal with.”

Conway also called on the university to diversify both its faculty and student bodies. Last fall, Black students made up just over 11 percent of the university’s freshman class — an increase from 7.3 percent in fall 2018, the lowest proportion since the university started to keep track of the statistic in 1992.

“I want to be able to walk around within this significantly diverse university and be able to see someone that has within some sort of likeness as me,” Conway said. 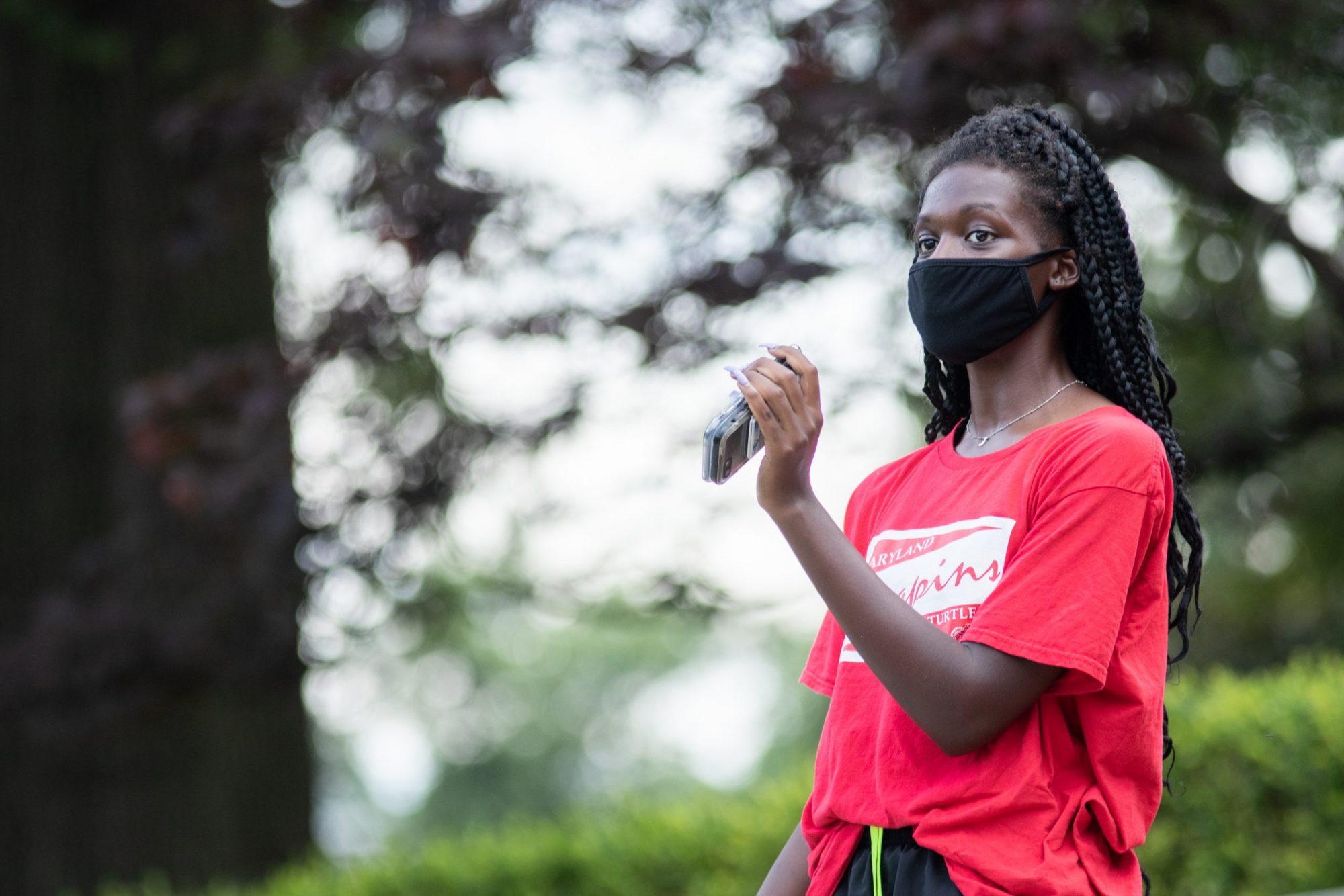 Dodge agreed with Conway, saying that increasing the diversity of both the student and faculty body, as well as making sure that everyone feels respected at the university, is one of the issues most important to her.

The drop in Black student enrollment happened just over a year after Collins’ murder — an incident that Dodge said would make her hesitate sending her own child to the university.

Moving forward, she said, the university has to acknowledge its past to make both Black students feel safe in enrolling at this university. And, she said, it must prioritize recruiting Black faculty.

One of the group’s most sweeping demands is for the university to divest from Maryland Correctional Enterprises — the state’s prison labor arm.

Last month, university students started a petition calling for the University System of Maryland to cease purchasing furniture built by those incarcerated in the state’s prisons. Since then, more than 7,000 people have signed on in support.

According to the MCE report for fiscal year 2019, incarcerated people employed in the state made as little as 17 cents an hour — well below the state’s minimum wage of $11. Furthermore, the majority of the state’s prison system is Black, at more than 70 percent as of July 2018. With Black people only making up 31 percent of Maryland’s population, the state’s prison system has the highest racial disparity in the country, according to a November 2019 Justice Policy Institute report.

Even though Dodge said the industrial prison complex is definitely an issue, she was unsure about the students’ calls for the university to stop buying university furniture from MCE. Doing away with the program entirely may do more damage to people behind bars, she said.

However, she said she supported demands for more transparency within the program.

“My suggestion would be to increase salaries to make this something so that people could support themselves in prison, be able to send money to folks outside of prison … to actually make it worthwhile,” she said.

Conway disagreed with Dodge, citing the necessity of abolishing prison labor as one of her top priorities.

“We have a moral obligation, where we need to make sure that prisoners aren’t being exploited and that they aren’t being mistreated,” Conway said. 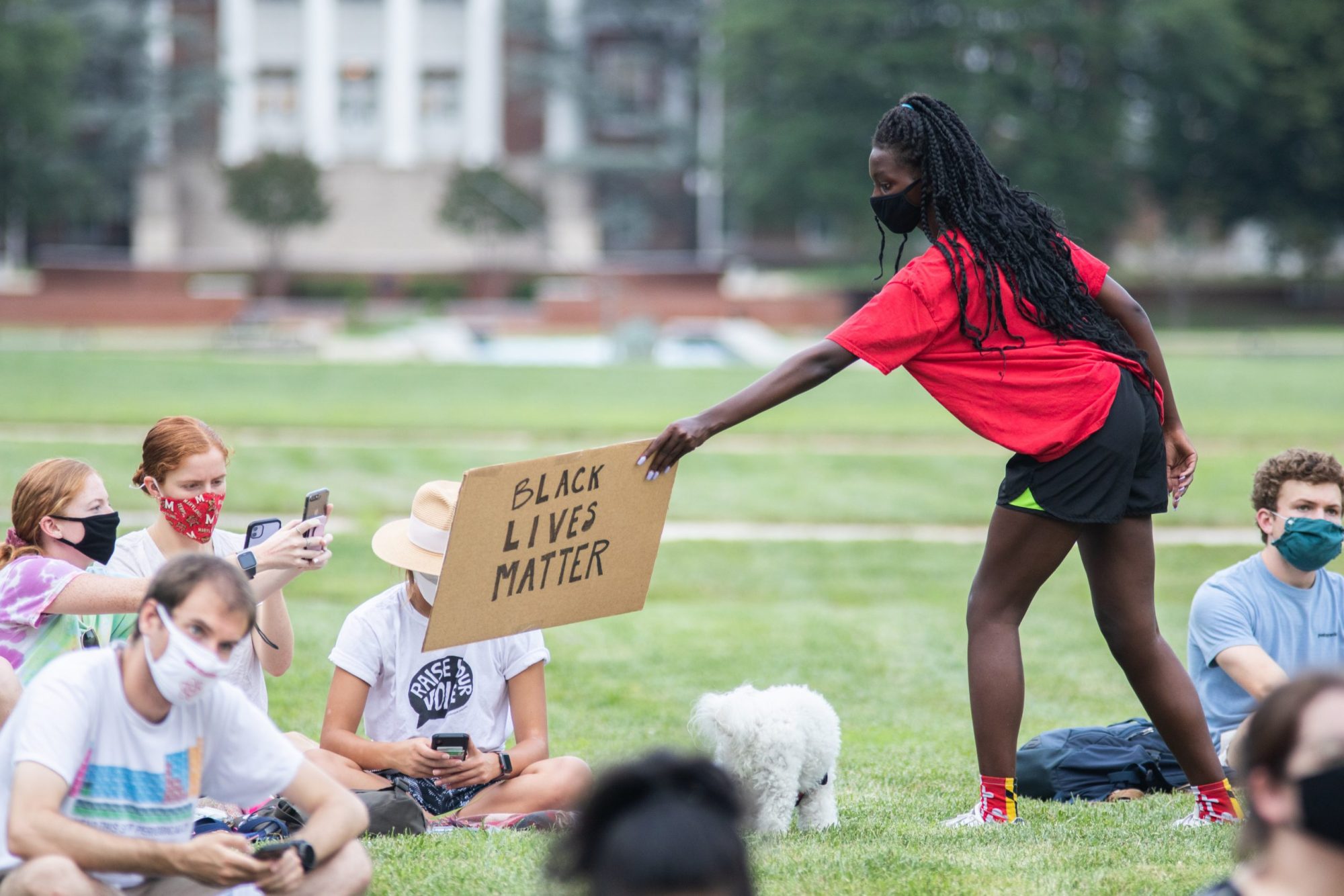 In the past, university President Darryll Pines has also pointed out that it is state law for system schools to have contracts with MCE. Change to this relationship would have to be made legislatively, he said.

As dark clouds swept across McKeldin Mall and droplets of rain started to fall on those still in attendance, organizers wrapped up the teach-in, encouraging everyone there to follow them on social media and get involved with the movement.

“We want to make sure that everyone stays invested,” Conway said. “We want people to see how they can be continuously participating within this movement towards dismantling institutional racism and systemic oppression.”