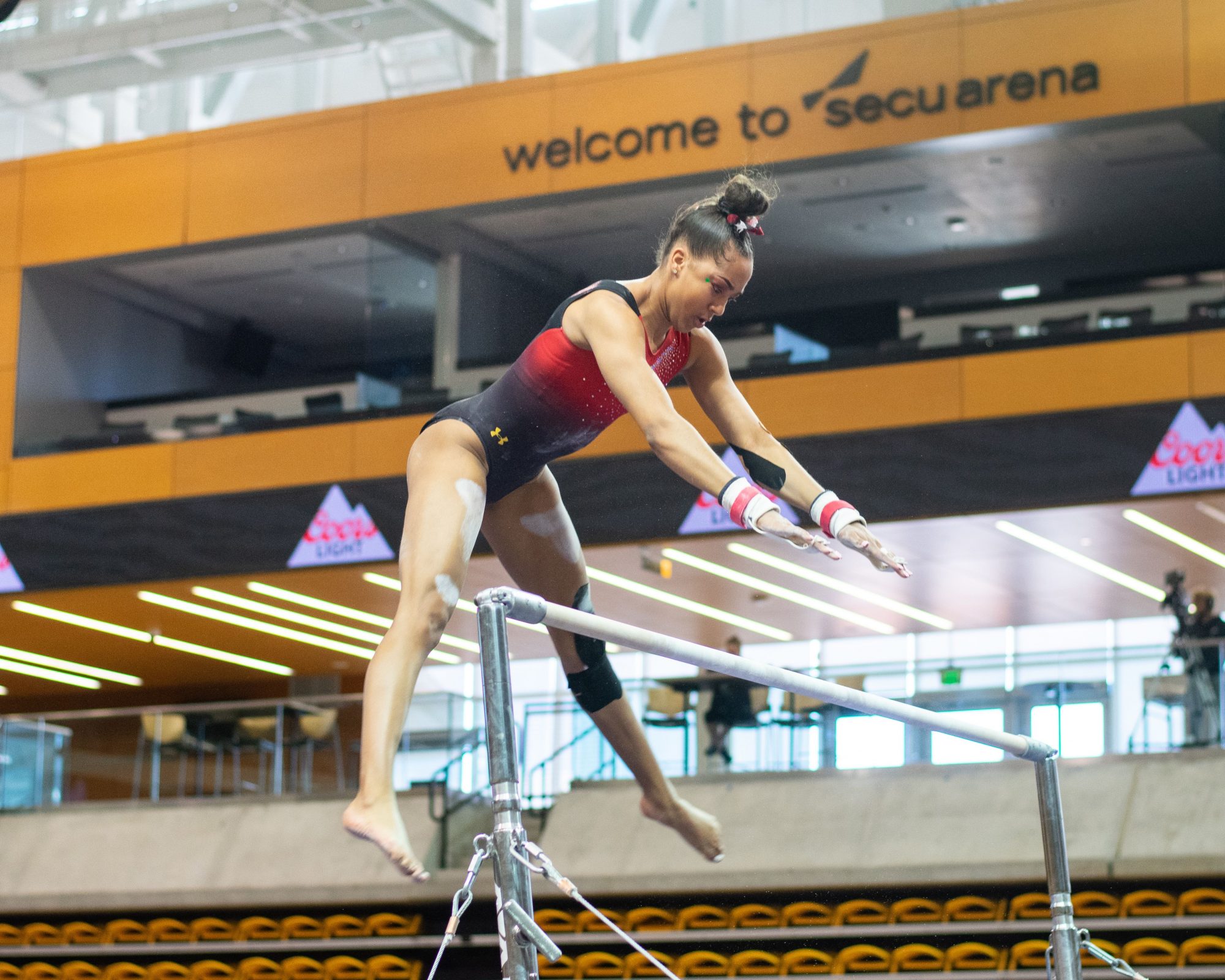 A line of high-fives awaited freshman Reese McClure after she nailed a 360-degree dismount on the beam. It was McClure’s first routine as a member of Maryland gymnastics, and she began her career with an impressive 9.825 on the beam.

McClure was not the only Terp to dominate on the beam. Junior Audrey Barber and senior Tiara Wright both scored 9.850, keeping Maryland above 98.000 for the first two rotations.

The Terps’ strong start propelled them to a 196.150 score, their highest score to open a season in program history, topping George Washington and West Chester University in the first tri-meet of the campaign.

“This was the best start in program history, and you can’t overstate it,” coach Brett Nelligan said. “I’m really proud of this team and what they were able to do tonight.”

The night began with an overall score of 49.075 on the uneven bars. Barber closed the event with her first 9.850 of the meet, and three more Terps scored at 9.800 or above. Senior Alecia Farina prompted a couple of fist pumps from Nelligan after scoring a 9.825 in her first routine of 2020.

“Starting fast on bars was key for us,” Nelligan said. “We talked about it during our last week of training, and starting the year with a 49 in the first event gave us a ton of confidence.”

Last season, the Terps lagged behind on beam, ranking outside the top-30 on the apparatus. But after McClure opened things for the Terps on beam with a 9.825, they maintained strong scores for the rest of the event. The team finished with a 49.025 on the beam, giving it a lead going into the third rotation.

In that rotation, however, Maryland regressed. The Terps scored a 48.850 on floor, but they remained in first place for the meet. Three 9.825s from McClure, Barber and junior Sabriyya Rouse saved Nelligan’s squad in the event, with a 9.500 from Alexsis Rubio lowering the overall score slightly.

Both Rouse and Barber hit double backflips to conclude their routines, keeping the spark alive for Terrapin on-lookers. Barber was a consistent bright spot for the Terps on Saturday night.

“Audrey’s such a confident competitor,” Nelligan said. “We know we can put her in difficult situations and trust her to hit.”

Along with all-arounders Barber and Farina, Maryland had four underclassmen competing on vault. The inexperience didn’t hinder the team in their final event, though, as each gymnast posted a 9.750 or higher.

The high scores on vault helped Maryland surpass its perpetual goal of 196.000 for a meet, and they helped the team to its first win of 2020. The Terps will have eight days off before hosting Iowa for a dual meet on Jan 19.

“It felt great being back out there,” Barber said. ”We really had a great meet, and it was so much fun. Now I’m really looking forward to the rest of the season.”