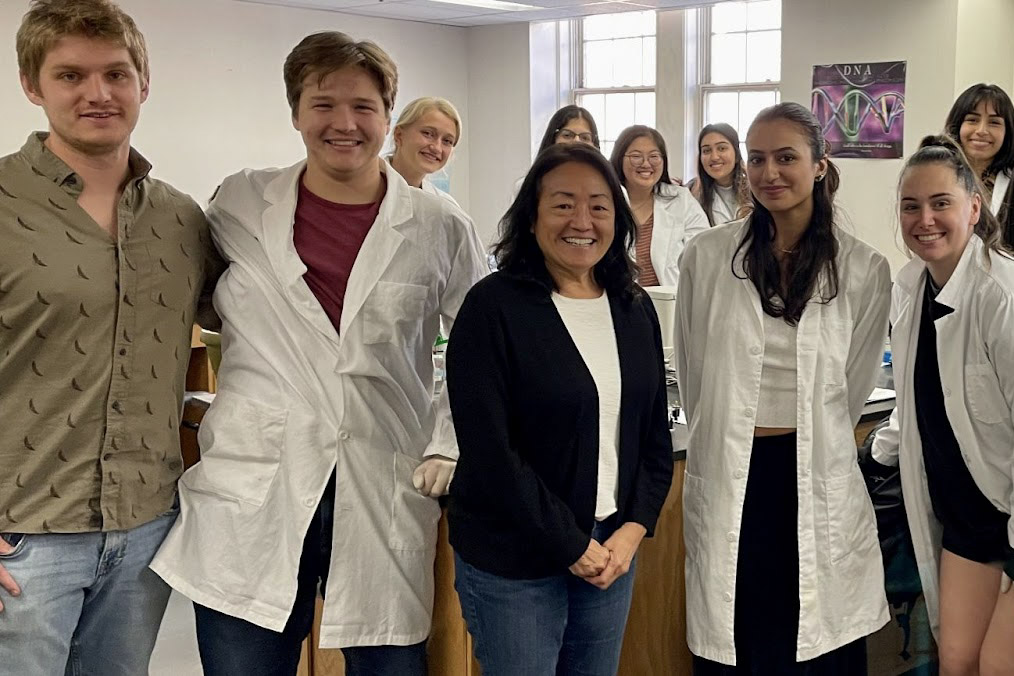 Dr. Chang, alongside students who took her recombinant DNA laboratory this fall semester, poses for a portrait on Nov. 3, 2022. (Photo courtesy of Husan Turdiev)

By Joseph Beck
For The Diamondback

University of Maryland cell biology and molecular genetics professor Caren Chang was presented with the Distinguished Scholar-Teacher award Dec. 9 for her research on the plant hormone ethylene.

Ethylene influences a plant’s growth and development. Placing a fruit in a paper bag to make it ripen faster is a common example of controlling the effects of ethylene.

Chang got her doctorate in molecular biology from the California Institute of Technology. She and a professor worked together to uncover the pathways that existed in the plant hormone. After their first big discovery, Chang was set on uncovering more unknown facts.

“Often in science, when you get one discovery, it really opens up a lot more questions and avenues,” Chang said.

Since her time in graduate school, Chang has been studying the genomes that make up ethylene to unearth new findings.

[New UMD biotech campus to open in Montgomery County in 2023]

At the award event, Chang gave a presentation titled “Secrets of an Old Plant Hormone: The Hidden Story of Ethylene and its Precursor Molecule” about her discovery pertaining to the precursor molecule of ethylene, 1-amino-cyclopropane-1-carboxylic acid, or ACC.

ACC is a molecule that has been known by the scientific community for years and was thought only to be the precursor to ethylene. From her studies, Chang uncovered that ACC has other hidden roles.

When treated with ACC, plants responded as if they were being treated with ethylene. However, Chang revealed there were ACC-specific responses that were unrelated to ethylene, which was a new discovery.

[At UMD golf course, researchers and environmentalists find a place alongside golfers]

Discovering the unknown drives Chang’s research. Through her findings, she is able to give answers to other scientists that can utilize them to conduct further experiments.

“I feel like I am providing that basic fundamental knowledge or discovery,”  Chang said.

Being a renowned molecular and cellular biologist is not Chang’s only trade. She also enjoys being a professor, even though she never thought she would become one. Being able to learn new things from her students and help them achieve their own goals has been very fulfilling for Chang.

“[Chang] was one of the first professors who I looked forward to coming to see every week,” said Matthew Fairchild, a senior physiology and neurobiology major who was in Chang’s  recombinant DNA laboratory class this fall semester.

The class surprised Chang by attending the event even though it was held the day after their final exam.

Rosie Vagnoni, a senior biology major who was also in the class, expressed that Chang is a different type of professor.

“I think a lot of times it’s a little bit stereotypical for STEM professors to kind of make you feel scared to ask questions. With her, she is very welcoming with it which was really cool. With that, it made everybody else super close in class,” Vagnoni said.