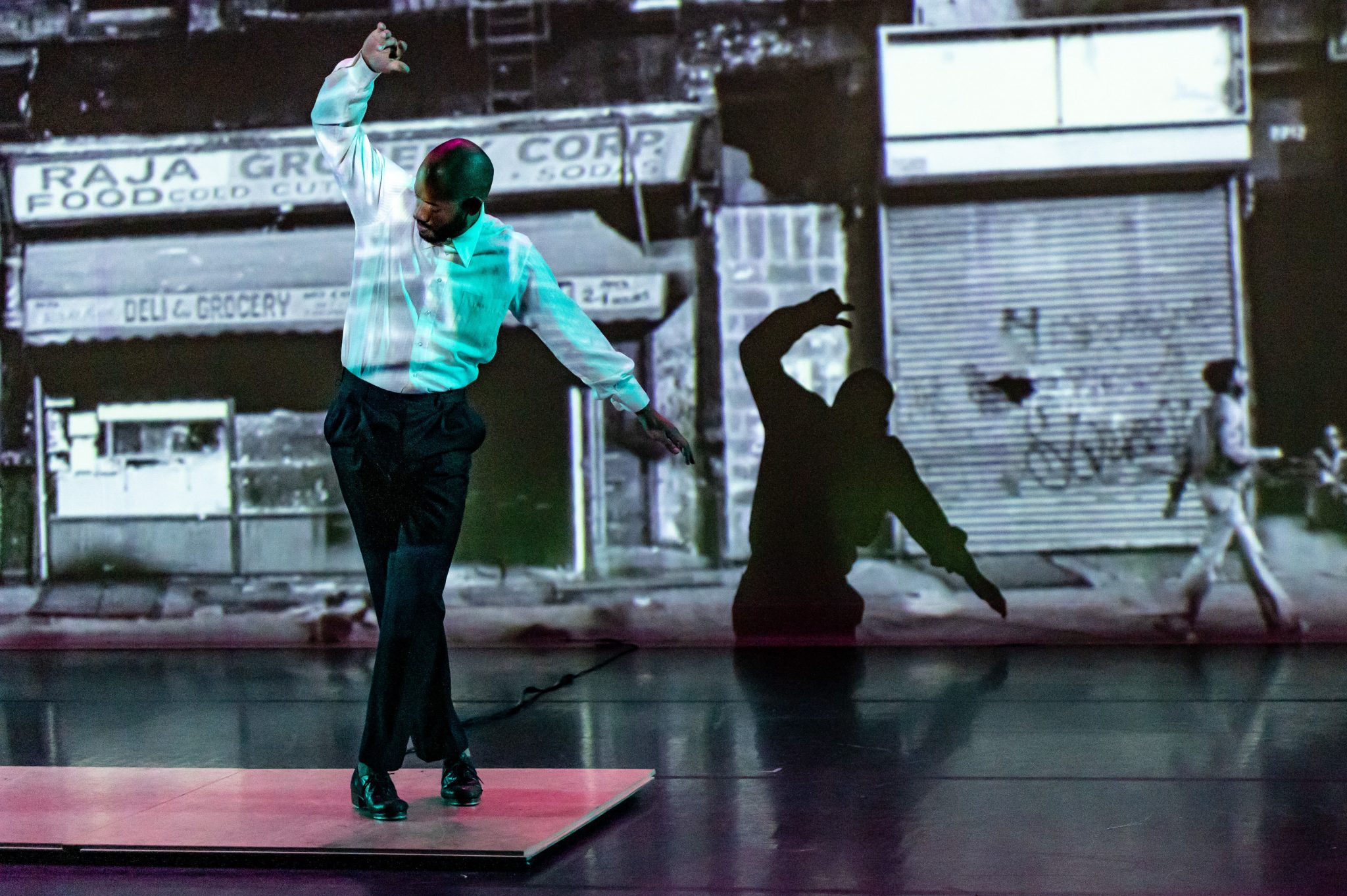 By Xiaozhuo Zhu
For the Diamondback

A storm of steps showered the University of Maryland last Friday and Saturday as the theatre, dance and performance studies school put on its Experimental Performance Series.

The show consisted of two parts — one led by Gerson Noe Lanza Ruiz, a graduate student at the theatre, dance and performance studies school, and the other led by Roxanne “Roxy” King, a senior theater major.

As the curtains opened, a voice set the scene in Harlem, New York and horns played in the background. Two people walked out onto the stage, a man and a woman, setting boards below them as a voice talks. Then, the lights came on and they started tap dancing.

The sound of drums filled the theater. The music and steps mixed together to create a new melody. Then, the music wound down, the woman left the stage and the lights started fading. The man, Lanza Ruiz, stood on the stage.

He weaved information about how he migrated to the U.S. from La Ceiba, Honduras, how he pursued the American dream by learning English and the adversity he faced as a person of color in the pauses between dances.

“I just loved seeing the effortlessness in the complexity in the way that he is moving,” Daniel Miramontes, a graduate student in the theatre, dance and performance studies school and Lanza Ruiz’s friend and roommate, said.

“I came because I know that [Lanza Ruiz] is an amazing dancer and I trusted that it was going to be a great show,” Miramontes said.

Charlene Cowan came to the show because Lanza Ruiz is her dance mentor and she wanted to support him.

The junior dance major said she was “expecting to see just the rawness of how he sees tap, how he hears tap and how he can bring tap into UMD as an elective.”

Cowan was also a former classmate of Roxanne King.

She came to see Roxanne King because she demonstrated how “if you have that passion, you can do anything you want.”

“She has a rhythm that just pours out of her body,” Nicholas King, Roxanne King’s father, said.

“I’m just glad that she chose to do this show,” he said. “Monday is her last day at the University of Maryland for at least a while.”

Like Lanza Ruiz, Roxanne King interlaced her dancing and stories about her life. She talked about what it was like growing up Black with white parents, such as the time she was asked as a 10-year-old for her birth certificate by a police officer.

She also talked about her hero, Dianne Walker, who inspired her to dance.

Roxanne King said the show was “the perfect time to explore what my childhood was.”

“My goal was not to teach the audience a thing,” she said. “I wanted them to experience it how I experienced it, by just accepting it without teaching.”

Roxanne King wanted Walker to be the “heartbeat” of the performance. She said the moment she saw Walker dance as a child, she wanted to do the same thing.

She said she saw a lot of Black tap dancers, but Walker “was the first one that looked somewhat like me.”

Roxanne King thinks tap dance is the only art form that is a universal language and it can tell genuine stories like she and Lanza Ruiz did in their performance.

“Anything you do with your shoes on is valid,” she said. “Everyone understands what is happening when you’re tap dancing.”