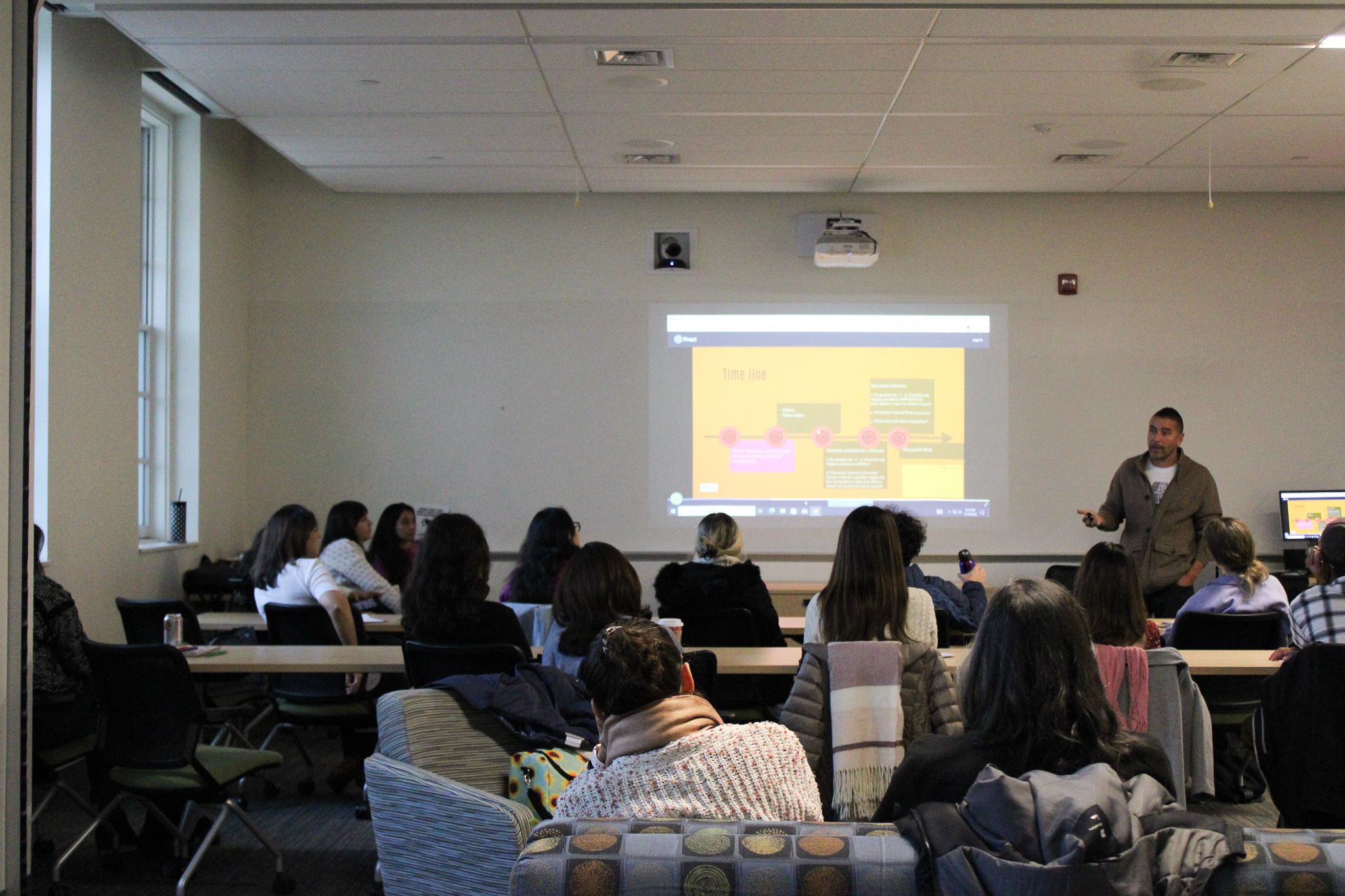 José Magro, an assistant clinical professor with this university's arts and humanities college's languages, literatures and cultures school, presents part of the lecture “Antiracist Pedagogy for Spanish Language Teaching: From Theory to Practice.” This lecture was presented with the goal of sharing each presenter’s teaching and learning materials that aim to integrate antiracist pedagogy into their curriculums. (Giuseppe LoPiccolo/The Diamondback)

By Dylan Jaffe
For The Diamondback

Six University of Maryland Spanish professors displayed the anti-racist materials they are trying to integrate into their curriculum for students in a lecture Friday at H.J. Patterson Hall.

In an effort to put an end to the colonized learning that takes place in a multicultural classroom setting, six of the professors in the Spanish and Portugese department are trying to “fill the cracks” that the required textbooks don’t seem to do, according to professor José Magro.

Spanish professor Tatiana Chi-Miranda also discussed the modules she is putting into place for this course.

Focused on advanced grammar and composition, Chi-Miranda created a module where students discuss racism and phobias in first person as the term they are explaining.

“[This] is a great introduction for the anti-racism module because it allows one to establish a personal connection to the text, but also it allows them to get a critical approach to it. And it opens doors for them to have a critical attitude and cultural approach to it,” Chi-Miranda said.

One example Chi-Miranda mentioned was a student pretending to be xenophobic, which means to have prejudice against people of other countries. The student spoke in first person regarding the term and explained what it was.

“I don’t want you to make friends with other cultures nor do I want you to enjoy the diversity of the world,” Chi-Miranda said as an example.

Cecilia Battauz approaches her class by incorporating Afro-Latino poets, authors and performers and elaborates on what race means, how it is used and how it affects how people interact with one another. She does this at the start of the semester, so students are prepared to discuss these topics further into the semester.

“All of those elements are analyzed when we analyze this. So it’s not only the content, but the way of transmitting and showing her experience as a Black woman in Peru,” Battauz said.

Leah Nuffer, a sophomore economics and Spanish major, has been taking Spanish classes since sixth grade and understands the importance of the colonization that American history seems to commonly portray.