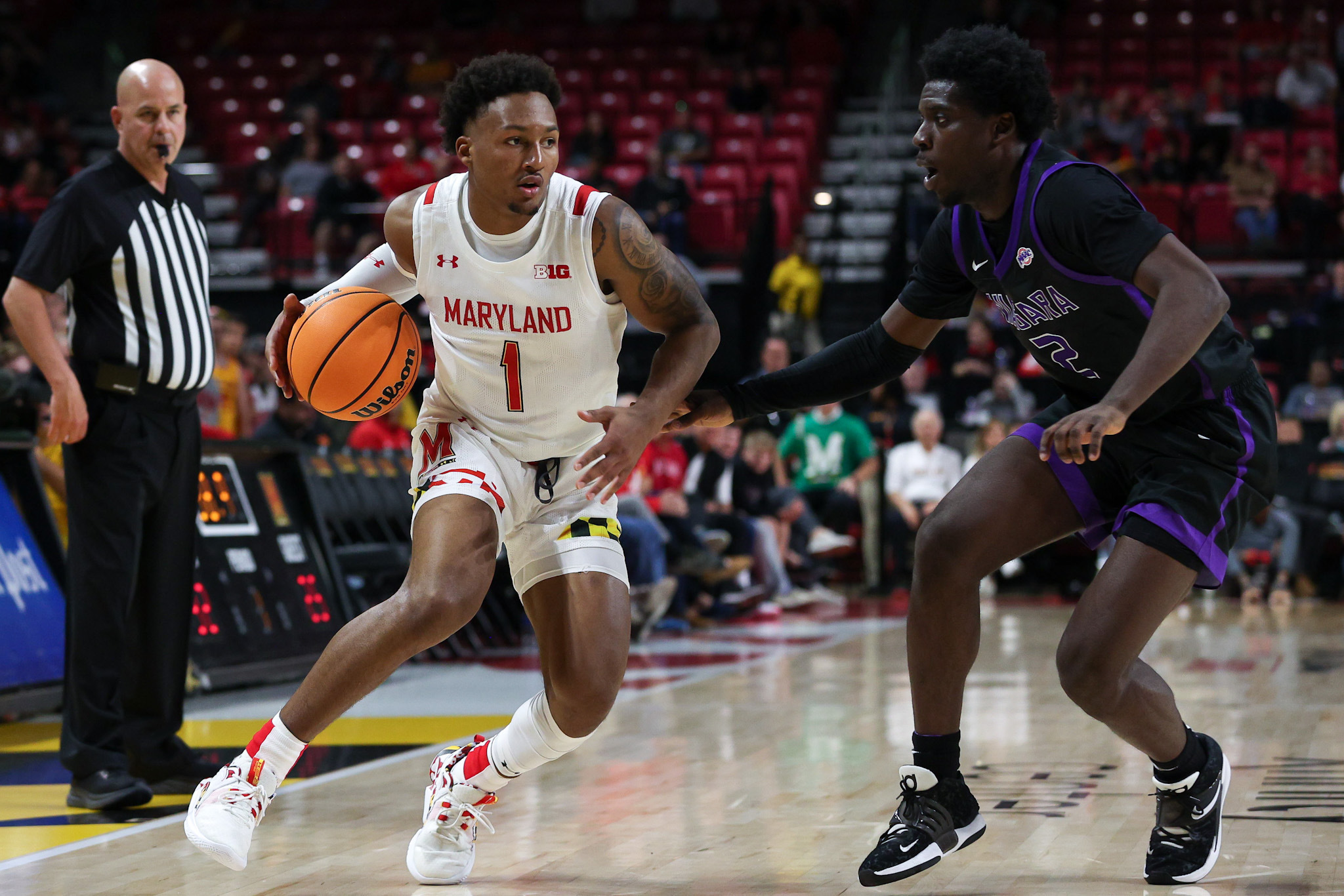 Jahmir Young drove off a Patrick Emilien pick and attacked the basket.

The guard stopped short and got a jumper to bounce off the backboard and fall for his first field goal as a Terp.

His bucket with 23 seconds left in the first half was the lone field goal scored by Maryland men’s basketball’s new-look backcourt, composed of Young and Don Carey, in the opening 20 minutes of its season-opener against Niagara.

However, the duo jump-started a sputtering Terps squad at the beginning of the second half and drained Maryland’s first four field goals of the period.

A Carey three-pointer and three buckets from Young buoyed the Terps early in the second half and spurred a 9-0 run that extended their lead to double-digits, one the Purples Eagles couldn’t erase.

Young’s team-high nine second-half points in front of about 30 family members and friends in attendance helped Maryland pull away from Niagara to notch its first win under new coach Kevin Willard, 71-49.

“It was weird to be honest with you,” Willard said. “I didn’t have to commute down to the arena. I didn’t know what to do, I had so much time. I worked out twice. It was a great feeling, I’m proud of this team, proud of the staff.”

“It’s been a crazy seven months to put together this roster and get these guys playing.”

Hakim Hart recorded the first bucket of the Willard era — a mid-range jumper on Maryland’s second possession. He and Donta Scott then hit back-to-back three-pointers to open up an early lead for the Terps.

Maryland added to its advantage as it began to go through its rotation. Scott drained his second three before backup guard Jahari Long nicked a pass from Lance Erving and found Scott for a layup that grew the Terps’ lead to double digits for the first time at 18-8.

Long and Noah Batchelor both added threes after coming off the bench to extend Maryland’s lead further and continued the Terps’ early pinpoint shooting. Willard’s squad made five of its first seven attempts from deep.

The Terps cooled off after their fast start, scoring just 10 points in the final 12 minutes of the first half.

“We were in a really good offensive rhythm, we were scoring and then I put a lineup out there that really hadn’t practiced together,” Willard said. “It was very evident that all of a sudden we got very stationary on offense towards the second 10 minutes of the first half. It wasn’t the players’ fault, it was my fault.”

Returning players Scott and Hart lead Maryland with 10 and seven points in the opening 20 minutes, respectively, but the Terps struggled in the paint on both ends as Julian Reese didn’t record a point in the first half.

The sophomore forward finished the game with seven points, and avoided committing another foul after he notched his third of the game with over 17 minutes left in the second half.

Niagara outrebounded Maryland 17-13 and grabbed eight offensive rebounds in the first half. Twenty of the Purple Eagles’ 27 first-half points came in the paint.

Young and Carey’s scoring sustained a Terps team that struggled to shoot to open the second half. The duo’s four field goals to begin the period sparked the run that featured Reese’s first point of the game from a free throw.

“Jahmir Young’s a heck of a point guard … this is a totally different system then he’s used to playing,” Willard said. “Everyone reacts to how your point guard’s playing, and when he kind of turned the boosters on and he got after it, he just gave everyone else a little energy.”

Sam Iorio scored two layups in the paint to cut Maryland’s lead back to single-digits with just over seven minutes to go, but the Terps found their shooting form again to finish the game as they started.

Two Scott three-pointers sandwiched a Reese layup that gave Maryland its largest lead at the time at 15. The forward finished 4-for-5 from deep and led Willard’s squad with 18 points on the day.

“I think [Scott’s] gonna be a first-team All-Big Ten player. I do. I believe that,” Willard said. “35 minutes is probably way too many minutes for him in the first game … I wanted him to get gassed, I wanted him to be tired, just because I think it’s good for him. It’s not easy playing 35 minutes.”

Young added his first three-pointer of the day soon after, and Scott hammered a dunk in transition to stretch the lead 20. Late points from Caelum Swanton-Rodger and Ike Cornish meant 11 different Terps scored in Willard’s first game in charge in College Park.