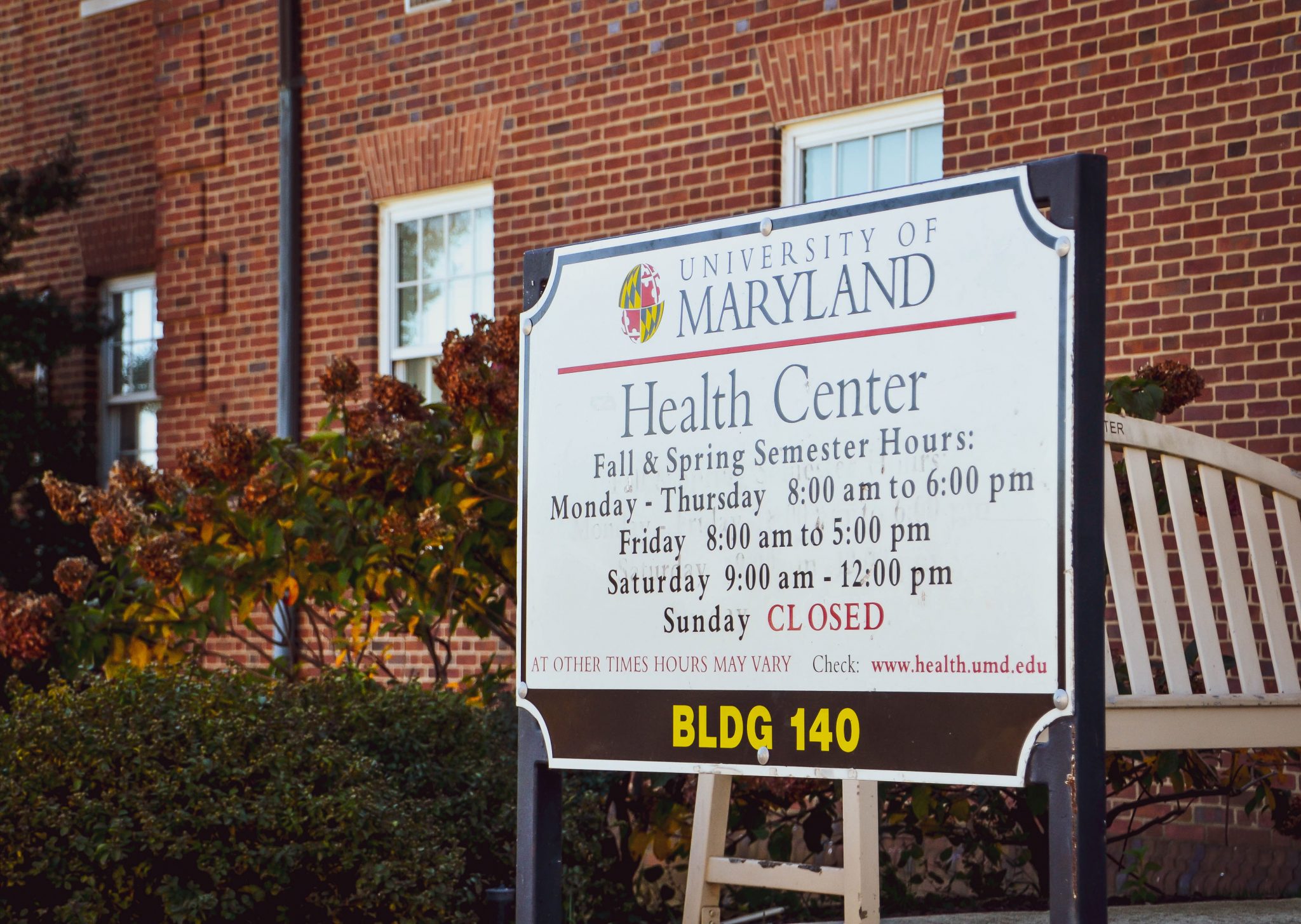 A sign outside of the University Health Center listing its operating hours on Oct. 27, 2022. The Health Center offers resources regarding abortions. (Jess Daninhirsch/The Diamondback)

When the Supreme Court overturned its landmark Roe v. Wade decision in June and ended national protections for abortion care, graduate students across the country mobilized to advocate for abortion protections in the states where they attend school.

Rachael Kuintzle, a biochemistry and molecular biophysics doctoral student at the California Institute of Technology, was shocked by the lack of urgency among graduate students in the aftermath of the decision. She began sending out emails to graduate student leaders across the country to plan some type of action, resulting in the creation of the Graduate Student Action Network. The network connects graduate students working to advocate for issues such as reproductive justice and anti-racist movements.

Kuintzle’s advocacy work culminated on Oct. 6 with a national day of action where students around the nation took a stand for reproductive rights.

This event was also organized by the Young Democratic Socialists of America.

Organizations at the University of Maryland, such as the Graduate Student Government and Fearless Student Employees, set up tables to talk to students about their resources for abortion access, providing a space for voter registration and getting signatures for a petition to the federal government to pass a law ensuring abortion access.

Many graduate students at this university have been forced to reconsider their futures after finishing their academic studies because of the Roe v. Wade ruling. Some do not want to move to states that do not have abortion protections, while other out-of-state students worry about the abortion rights landscape in their home states.

Lizzie Irlbacher, a political science doctoral student, said many of her friends are considering whether they would be willing to take jobs in states where abortion and contraceptives are restricted. Students planning to work in academia, including Irlbacher, oftentimes don’t get their first-choice jobs and take whatever they can get. This makes it difficult for students to navigate differing reproductive rights landscapes during their job searches, Irlbacher said.

“I imagine there might be a lot of women maybe not going to those schools anymore, especially graduate students, and possibly choosing industry instead of academia,” said Irlbacher, who is the GSG’s legislative affairs vice president and its speaker for the assembly.

Since the Supreme Court overturned Roe v. Wade, 17 states have moved to ban or restrict abortion, according to Axios. In Maryland, abortion is currently legal until viability — the point in pregnancy when a fetus can survive outside the uterus with medical help. There are a few exceptions where abortion is legal after viability, such as to save the pregnant person’s life or if the fetus will suffer serious health issues during the pregnancy.

But lack of abortion access has repercussions on graduate students across the country — including in so-called “safe haven” states such as Maryland — because of the high proportion of out-of-state graduate students in many programs.

As of fall 2021, roughly 68.1 percent of graduate students at this university were from outside of Maryland, compared to 24.5 percent of undergraduates.

Many out-of-state graduate students have told Irlbacher they would be “screwed” in their home states — left without abortion access and often, certain contraception methods such as Plan B, an emergency contraceptive.

Students in states where abortion is starting to be restricted were likely scared by the decision, Kuintzle said. Suddenly, thousands of students across the nation woke up to have fewer reproductive rights in the state where they attend school, Kuintzle added.

“As a graduate student who’s stuck in your program for a few more years, it’s scary to wake up with less rights,” Kuintzle said.

Ananya Krishnan, a senior anthropology and physiology and neurobiology major at this university, is the president of the Women’s Health Network, which works to educate people on reproductive health, advocates for issues regarding women’s health and combats misinformation on these issues.

Krishnan said one concern she has heard from many students in medicine is whether they will attend medical school or do their residency in states with restricted abortion access.

“In a lot of states where abortion is no longer legal, the education that they’re providing is not really fully comprehensive anymore,” Krishnan said.

Besides their lack of abortion-related education, schools in these states may be more restricted in their education on family planning, which Krishnan believes is a concern for both students and patients receiving care from providers trained in these areas.

Graduate students at this university are required to have health insurance. The student health insurance annual plan, which is one of their options, costs $2,334. The minimum stipend for a full nine-month graduate assistantship is just more than $23,000, and many graduate assistants have said they are forced to live paycheck to paycheck given regular expenses, such as living, health care and food.

The cost of abortions in Maryland can range from about $400 to $2,200 depending on the type of procedure and how far along the pregnancy is, according to Pregnancy Decision Line. Under the student health insurance plan, abortions are partially covered, with 80 percent of the charge covered for providers in the plan’s network or 60 percent for providers outside of the network.

For the upcoming midterm elections and the 2024 general election, Irlbacher and Kuintzle think it’s important for graduate students to step up to protect reproductive rights. Depending on the outcome of the Maryland gubernatorial election, abortion may or may not be codified in the state constitution.

The Democratic candidate for governor, Wes Moore, said he supports adding abortion rights protection in the state constitution. Dan Cox, the Republican candidate, has previously supported legislation that would ban abortion in the state.

However, Irlbacher and Kuintzle believe the 2024 election holds a greater impact on abortion access nationwide.

Although Maryland’s current laws protect graduate students at this university, Kuintzle said even those in protected states have a chance to lose these rights given the direction the federal government decides to take.

“We are looking at the very real threat that within a few years, we might not have those rights anymore,” Irlbacher said. “And that’s something that weighs in my mind a lot.”