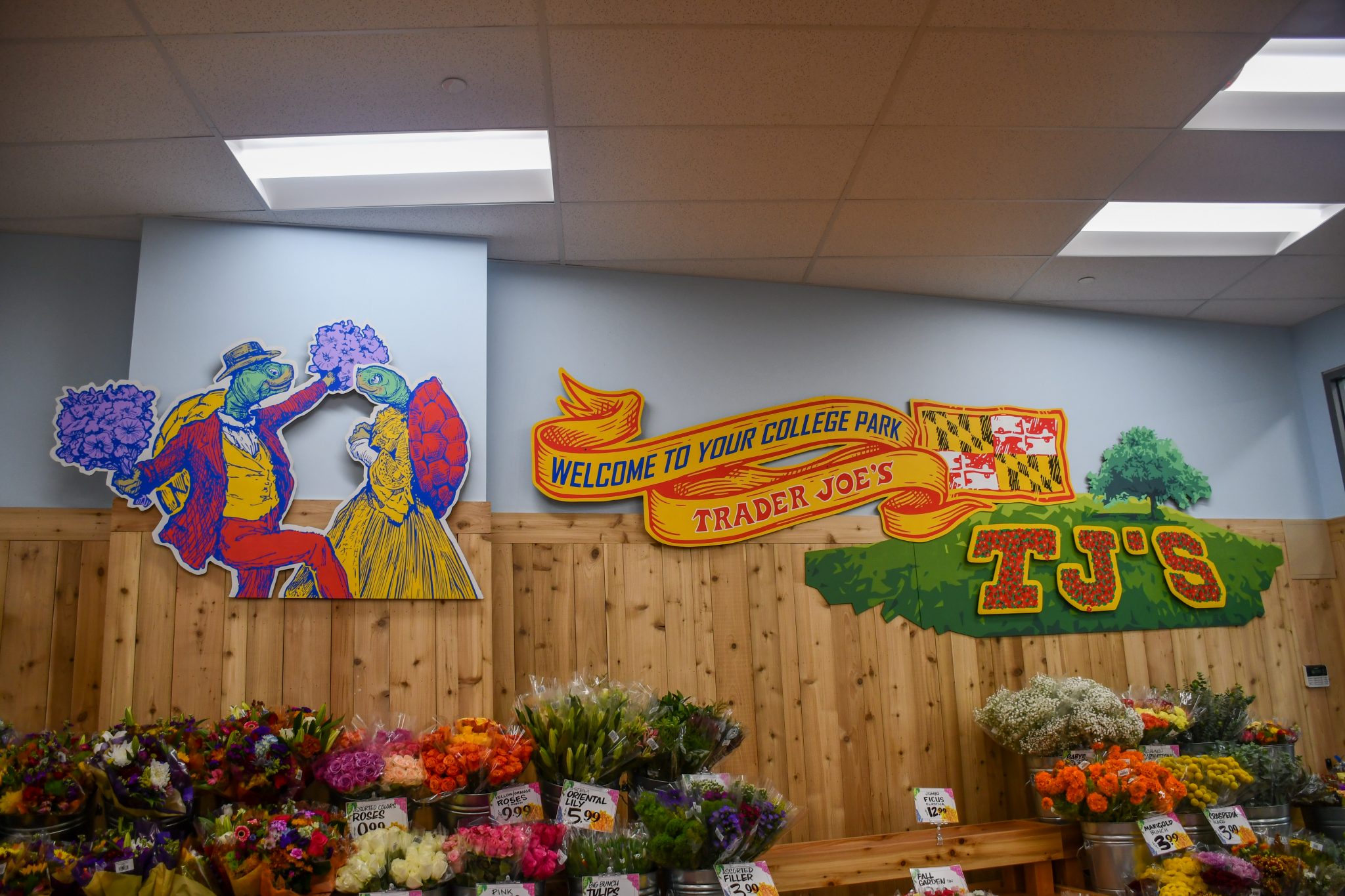 The sun had barely peaked over the horizon but before 8 a.m., hundreds of people were already lined around the block of Calvert Road where Prince George’s County’s first Trader Joe’s grocery store sits, buzzing with excitement and waiting for doors to open.

Community members and students alike are eager to shop at the 11,000-square-foot store, located at 4429 Calvert Road. It’s less than a 10-minute walk from the University of Maryland’s South Campus and will provide an affordable grocery option, community members said.

Domingo, a Trader Joe’s aficionado who has lived in College Park since she graduated from this university about 40 years ago, attended the opening with a group of friends who had hosted a breakfast party before coming to stand in line for the store opening. She believed in the vision for Trader Joe’s for years, and echoed the importance of a walkable grocery store.

“Seven years ago [College Park] was really a food desert,” Domingo pointed out. “There was no Whole Foods, there was no Lidl, the students didn’t have anywhere to go. And a lot of them are on foot — so this is just amazing.”

Nia Dougherty, a senior criminology and criminal justice major, shot out of bed at 6:15 a.m. to make sure she was at the store before it opened. She usually frequents the Trader Joe’s Silver Spring location, but is excited about the shorter commute to the College Park store.

“This is a great opportunity for College Park to have a store like this just so close to our doorstep,” she said. “It’s going to be a game changer.”

Joseph Martorella, the store manager, marked the official opening of the store by cutting a ribbon with a large pair of black scissors emblazoned with the Trader Joe’s logo on the blades. The crowd erupted in cheers and trickled into the store, admiring the walls adorned with murals of College Park and the university campus, painted by Trader Joe’s crew members.

Martorella, who managed the Silver Spring location for seven years, hired more than 100 people for the new location. Trader Joe’s was looking for a spot in Prince George’s County for a long time, he said, and the College Park location presented the perfect opportunity.

“Seeing the community turnout in such a huge number was inspiring,” he said. “I think it’s going to have a tremendous impact.”

The new Trader Joe’s is the beginning of a slew of development that will transform downtown College Park into a walkable neighborhood, according to Wojahn.

“We are doing everything we can to make it so that people who live in College Park can get everything they need right here without having to get into a car,” Wojahn said, holding a red grocery basket with a green tote bag and dark chocolate peanut butter cups.

Senior agricultural and resource economics major Molly Visco echoed the importance of a walkable grocery option — she thinks the new location will be both accessible and affordable for students on South Campus. Other grocery stores in College Park can be difficult to get to without a car, or expensive, but Trader Joe’s provides options for the college student’s budget, she said.

Trader Joe’s will also be accessible for drivers: There’s a two-story parking garage adjacent to the store with more than 100 parking spaces, according to a Trader Joe’s spokesperson. Customers can validate their parking for an hour and a half.

The new grocery store also helps liven the energy in College Park. January Roberts lives in College Heights Estates and has seen College Park develop over the years. For her, specialty options at Trader Joe’s along with affordability make it a welcome addition.

“I hope that they branch out to other communities in [Prince George’s] County,” she said. “There are other areas that should have stores like this, not just here in College Park.”