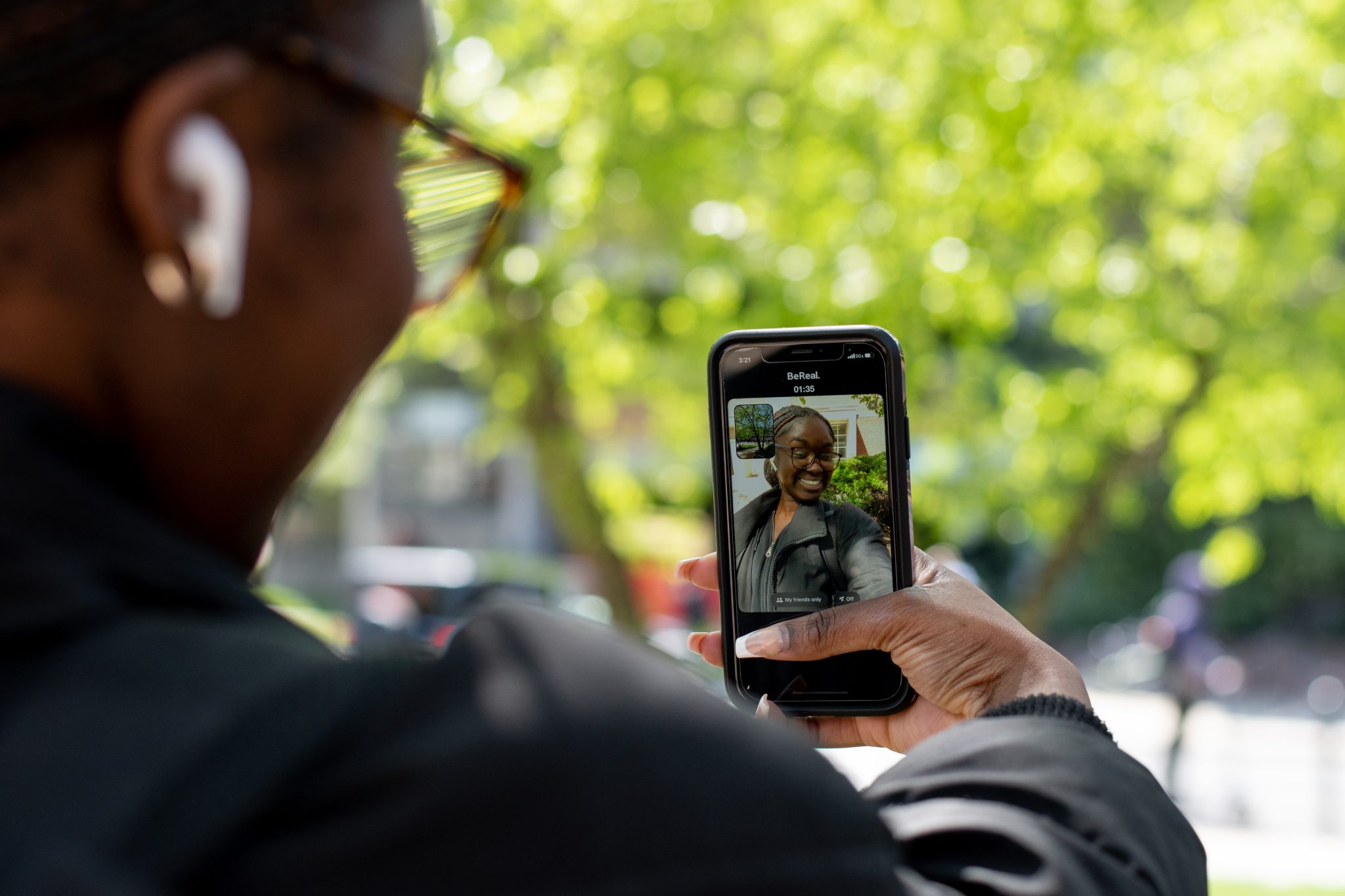 A student captures a photo on BeReal on April 28, 2022. BeReal is an app that sends notifications at a different time each day, giving users two minutes to submit a post featuring a photo from taken from both the front and rear cameras on a phone. (Autumn Hengen/The Diamondback)

When University of Maryland Club Tennis received an email from BeReal asking if they wanted to participate in a fundraiser collaboration, the club immediately wanted to get involved.

BeReal, a French social media app released in 2020, started gaining major popularity this year. The app has obtained traction as an authentic and candid form of social media in which users are sent a notification and have two minutes to post a photo using their phone’s front and rear cameras to show what they are doing at a random time each day.

Valentina Prince, a senior animal science major and the club’s co-president, said the club set up a video conference with the company and talked to them about how the fundraiser would work, and found out that BeReal frequently does this to incentivize new users.

“They worked with a lot of school organizations to do this kind of fundraiser,” Prince said. “So, they’ve worked with fraternities and sororities and they’ve also worked with other club teams.”

BeReal required the club members to download the app, if they did not have it already, and tell friends to get the app. New members would need to become “true users” — have at least five friends on the app, turn on notifications and post at least once.

Prince said club tennis is one of the first organizations at this university to receive the opportunity to work with BeReal.

Wolfson, club tennis’ vice president, said this appealed to them because it is easier to get people involved compared to a bake sale or other event requiring people to go somewhere.

“It’s kind of like a non-traditional fundraiser, but it seemed like a convenient and just cool thing to do,” he said.

Prince said the most difficult part of the fundraiser has been that many people already have the app because it became more well known over the summer, so it is harder to advertise and find new people to download and participate.

“I think that if we would have known about this opportunity earlier on, we definitely would have gotten a lot more people within our own club to be able to participate instead of trying to look outside of our club and see if our friends or family don’t have it yet,” she said.

Nguyen, a junior bioengineering major, said it is simple, which made it appealing.

“It’s just downloading a free app, which makes it a lot easier for people and less pressure,” she said.

While some people had a harder time finding new users to the app, Wolfson said the amount of people that participated is not important because the company did not enforce a certain number of people that had to join as a condition of whether or not the club would receive funding.

The club can use the funds from this event to help pay for the tennis equipment, indoor courts, attending away tournaments and putting on the socials and formals they have each year, Prince said.

Many people, including Nguyen, were surprised that it is possible to do a fundraiser with BeReal, but said it is a great idea.

“It’s more of a newer social media, not as many people use it,” she said. “So, it’s nice to get people involved in that and also raise money for tennis.”