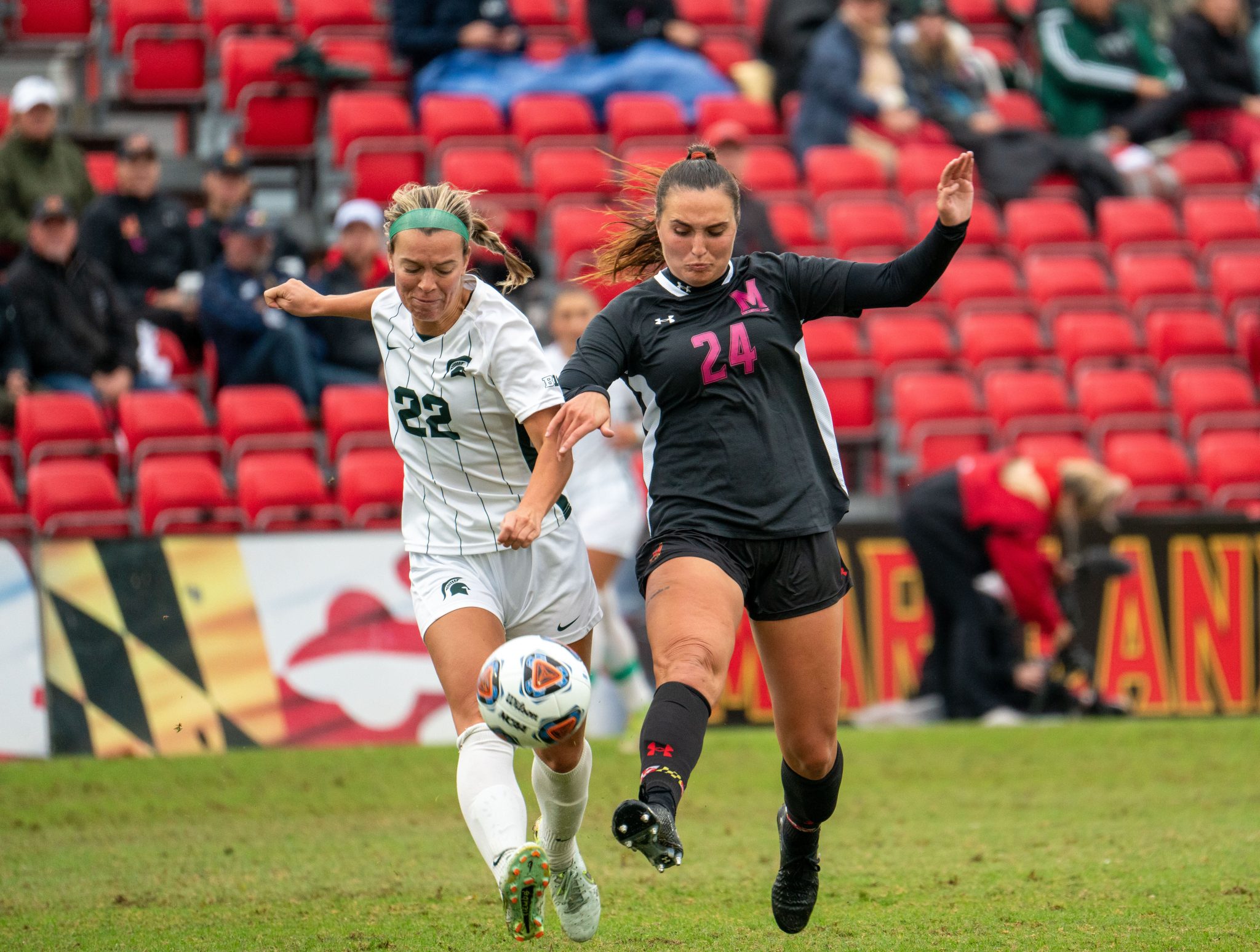 With a clean cutback, the sophomore found Lauren DeBeau wide open just inside the Terps’ penalty box. After taking a touch to get the ball away from her feet, she unleashed a far-post strike to give the Spartans their breakthrough 37 minutes into the match.

Maryland was unable to snap its three-game losing streak after returning home to welcome Michigan State to Ludwig Field, falling to a 4-0 defeat against the Spartans.

“This is probably the best team that we’ve seen in the Big Ten,” coach Meghan Ryan Nemzer said.

Both teams struggled to control the ball in the early parts of the game with wet conditions that made it difficult to play long balls in behind. Neither team could register a shot on goal until the 30th minute.

The Spartans forced five corners before recording their first shot on target. Michigan State was able to record eleven total shots at halftime, with four falling on target and three forcing saves from Maryland goalkeeper Emory Wegener. The Spartans persisted through a tough Terp defense and broke through with Wickes’ goal in the 37th minute.

Maryland’s offense couldn’t record a shot on target in the first half, failing to break through a Michigan State defense that only conceded six goals in 12 games played in 2022.

Michigan State controlled the match in the opening 45 minutes while holding 62 percent of possession, with 73 percent of the Spartans’ possession taking place in Maryland’s half of the field. The Terps struggled to get forward, holding 71 percent of their ball possession in their own half.

The Terps registered just one shot on target in the first half, but the opening moments of the second period looked promising for the Terps. Mia Isaac was able to find space to get a shot off, but it fell off target.

However, just minutes after the Terps conceded again. The referee awarded Michigan State a free kick near the Maryland byline next to the goal.

The ball was pinged into the Maryland 18-yard box by graduate student defender Ruby Diodati before Celia St. Gaynor met the delivery with a headed effort into the ground, which ricocheted into the net from the foot of a Maryland defender in the 50th minute.

Michigan State scored an almost identical goal to its second just 20 minutes later. A set piece following a foul on the Maryland byline was chipped into the area by Diodati again, meeting the head of Zivana Labovic. Wegener got a hand to the strike but couldn’t keep it out.

“That’s something we continue to talk about. Not giving a team like Michigan [State] free looks at our goal,” Nemzer said about the fouls leading to the second and third Spartans goals. “Sometimes you gotta chalk it up to not being our day and it wasn’t our day today.”

The Spartans were able to record one more goal from Maggie Illig. The freshman forward was found with a ball in behind by Ranya Senhaji before slotting in a grounded effort beyond Wegener for the Spartans’ fourth of the day.

Michigan State outshot the Terps by 14 and created 19 shots total, as the Spartans’ offensive acumen overwhelmed Maryland and sent it to its fourth-straight loss.

“I’m going to look back at this film and obviously it starts with me, but I thought we just need to do a better job with individual battles right now,” Nemzer said.