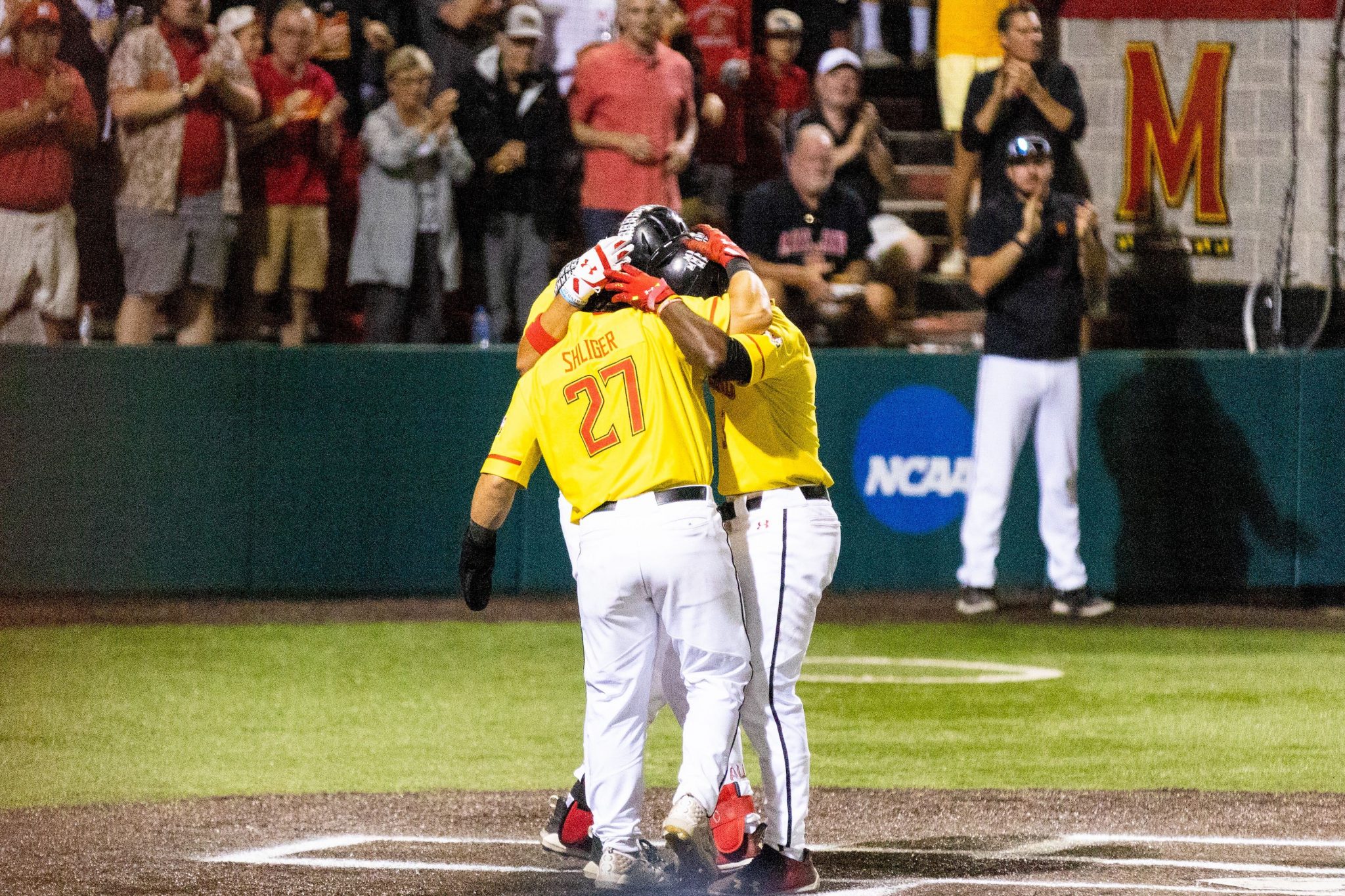 Luke Shliger couldn’t get out of bed on the most important day of his baseball career.

Fresh off of catching for 20 critical innings the day before in a doubleheader against Wake Forest and UConn, Shliger also had to deal with a sickness ahead of a do-or-die College Park Regional final rematch against the Huskies.

But Shliger didn’t succumb to the combination of fatigue and illness.

Instead, he thrived. The sophomore blasted a lead-off homer to start the game, giving Maryland baseball hope it might stay together for one more series.

Then the hope shattered.

The Huskies jumped on the Terps early with six first-inning runs and walked away from the game as College Park Regional champions.

A controversial eight-inning call erased a run, a base-runner and gave a Maryland out, making the wound that much fresher in a close game.

“Tough to lose a season to a hero umpire,” pitcher Jason Savacool tweeted shortly after the game.

Maryland was left with nothing after an award-laden season that reestablished the standard for the school’s baseball program — just one win away from the Super Regional.

So much had built Maryland up to its Omaha expectation — it set program records in wins, runs, hits, homers, RBIs and walks along with the team’s first conference title since 1971.

Individually, Shliger set a record for runs scored while Chris Alleyne broke the single-season record for homers. Every record that fell built up the legend of Maryland baseball — until it all fell short one game from Omaha.

“You know, you wish you could really embrace what we did this year in the moment, but it’s always, ‘On, to the next one, on to the next one,’” coach Rob Vaughn said. “Now that it’s over I think we’ll be able to look back at a team that broke every record … they set the standard for what it means to play here.”

From a shocking opening sweep of annual baseball power Baylor that led to an 8-0 season start, a 26-8 shellacking of Towson, Ryan Ramsey’s perfect game against Northwestern and a dominant closing stretch that included a sweep of eventual postseason Big Ten Tournament champion Michigan — Maryland baseball accomplished almost everything it wanted to.

One decision made it all possible.

After last season’s regional loss to East Carolina, Alleyne went undrafted in the 2021 MLB Draft and faced a crossroads: Come back for one more year or sign with a minor league team.

Vaughn called him and laid out his choices. Alleyne chose the former, and began one of the best seasons a Maryland baseball player has ever had — culminating in a Big Ten Player of the Year award.

“Probably one of the best decisions I’ll ever make, to come back,” Alleyne said. “When I saw the group of guys we had coming back and the love and passion they have for the game in that locker room … We did as good as I could have hoped for.”

His improvement was apparent. Alleyne batted .080 in 2018 — his freshman season and Vaughn’s first at the helm. At the end of his fifth year, the outfielder became one of the few players ever to slug 20 homers and steal 20 bases in a single season.

“You go from a guy that’s probably remembered … as a good, solid player to a guy now that [Athletic Director Damon Evans] told me after the game he’s gonna build a statue of him in front of our stadium,” Vaughn said. “Unbelievable human, unbelievable kid, poured his heart and soul into this, and we’re gonna watch that guy play on TV some day.”

Outside of Alleyne, several players broke out on the year as well. Shliger snatched the top spot in the lineup and became a reliable lead-off presence with a .495 on-base percentage.

Kevin Keister clocked a 1.002 OPS at the plate, a sizable improvement on a freshman campaign that saw him grab just four hits in 41 at-bats. Keister will be one of many returning players for Maryland that will hope to repeat the 2021 squad’s dominance.

Matt Shaw, Nick Lorusso, Shliger, Bobby Zmarzlak, Troy Schreffler and Ian Petrutz all have the option to return. Alleyne and Ryan Ramsey will likely be drafted, both will be key losses.

Starting pitchers Nick Dean and Savacool and a bullpen filled with younger players will likely come back. Starting first baseman Max Costes likely faces a similar crossroads as Alleyne a year ago — with the possibility of being drafted but with the option to come back for one more year.

Overall, Maryland baseball will retain most of its talent, and Vaughn seemed optimistic about his incoming freshman class. “Talk about make-up, those kids have it in spades,” Vaughn said.

Nothing should stop Vaughn’s club from making another run in 2023. But the legacy of the 2022 squad lies not in its outright success of a historic season, but in its resilience.

The Terps lost the second game of the regional against UConn to fall into the loser’s bracket but overcame Wake Forest and the Huskies the day after to fight their way back to a winner-take-all match.

Maryland ultimately fell one call and a few bounces short of the win it needed despite an early 9-1 deficit. Maryland’s first home regional didn’t end the way the Terps wanted, but they gave their best shot with tired bodies and showed their trademark resilience.

That effort and the team’s success may matter in the long-term. Nothing changes the disappointing outcome that ended Maryland baseball’s 2022 season.

But the historic run might be the turning point for a young coach, a still-promising roster and a lasting fiery disposition shown through the season’s final moments. 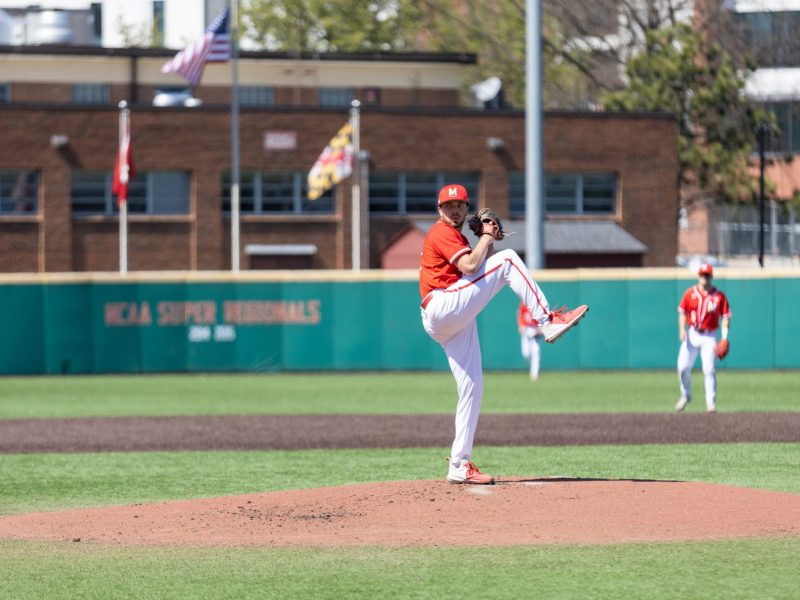