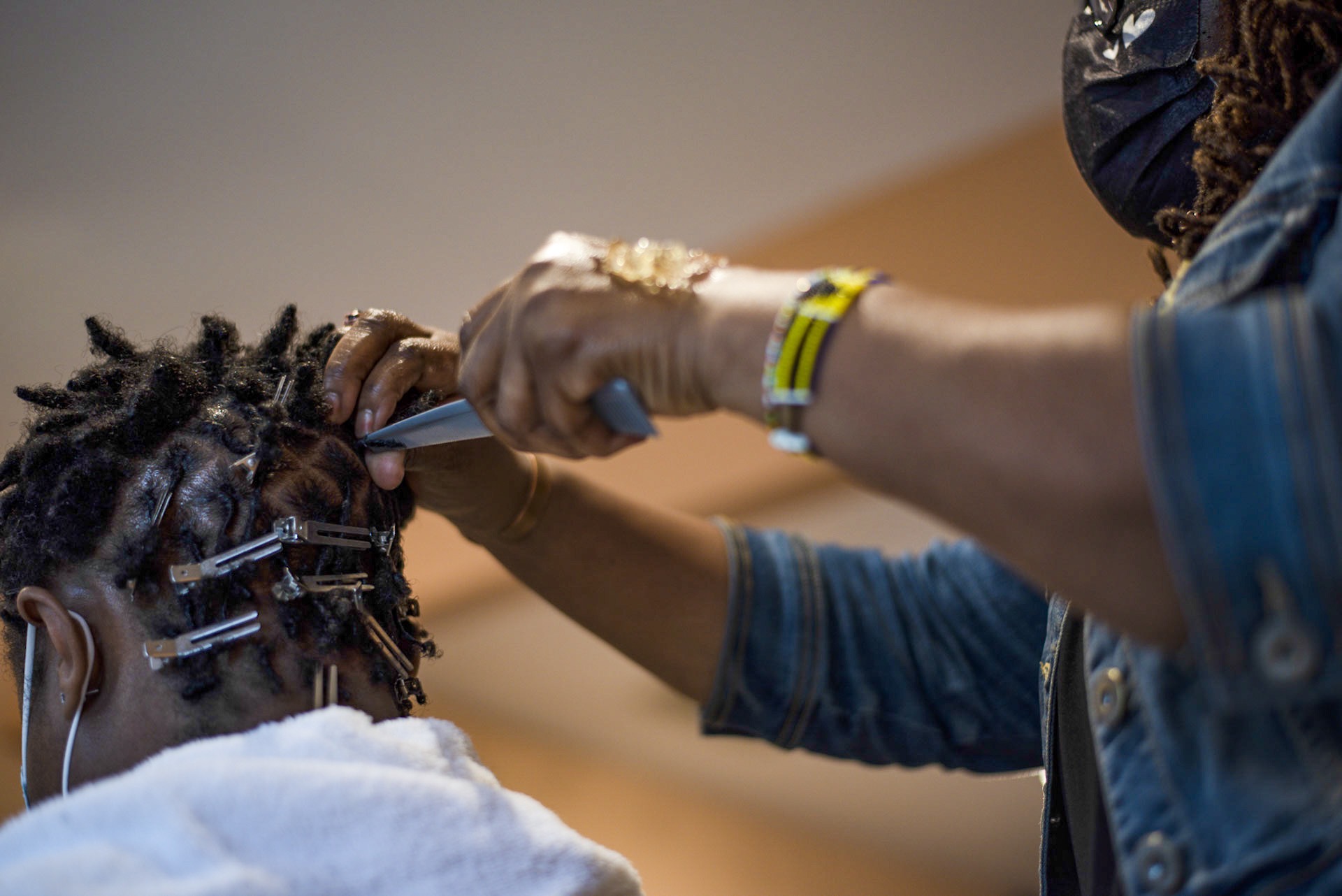 Gabby Vasquez sat still as the trimmed strands of hair fell onto her shoulders.

The snipping sound of the scissors echoed in her bathroom while her younger sister cut straight strands to leave only curly hair behind. After years of damaging her tresses with texturizers, Vasquez had decided it was time for the “big chop.”

The big chop — cutting off damaged or chemically processed hair so it can grow in its natural state — would allow her hair to flourish naturally. This cut was an emotional moment for Vasquez; it felt like the start of a new phase in her life.

For many people with natural, textured hair, coils and curls hold a meaning that goes beyond what meets the eye. Students and professors at the University of Maryland said their natural hair is central to their identity, personalities and lifestyles.

“I am inextricably linked to my hair,” said Dr. Typhanye V. Dyer, an epidemiology associate professor in this university’s public health school.

Dyer’s hair is part of her authentic self. In the past, students would ask how she got away with having locs while working as a professor, but she never saw it as something to get away with.

“It’s more important for me to be true to myself and my culture than for me to conform to what you think is acceptable,” she said.

Dyer cut her locs during the COVID-19 pandemic on a Tuesday morning she will never forget.

Although Dyer has often found herself cutting her hair while going through intense situations, she also enjoys getting creative by coloring her hair.

She first did the big chop after a relationship because she wanted to uplift her energy.

Like Dyer, Dr. Jennifer D. Roberts, an associate professor in the kinesiology department of this university’s public health school, has found comfort in her natural hair. After years of straightening and relaxing it, she did the big chop as an adult and started to re-engage her natural hair.

“I feel proud to display … who I am authentically,” she said. “That’s not to say if I go ahead and blow dry and straighten my hair, that’s not being authentic, because I think I have the right to do whatever I want with my hair and my body.”

As her hair grew out, she realized she had forgotten what her natural hair looked like.

“I had to get a new relationship with my hair,” Roberts said, referring to how she had to re-discover how her hair reacts to different things.

Nevertheless, Roberts has found it liberating to have shorter hair, rediscovering the hairstyle she probably always would’ve wanted.

People with textured hair have different routines and go-to styles based on time they are willing to spend and hair characteristics such as porosity and length.

Jeremiah Samuel, a senior operations management and business analytics major, likes to incorporate styling tools in his routine. He uses a curling sponge to define the curls in his hi-top fade, a style where the hair on the sides of the head is cut short and the hair on top is kept longer.

Others wear their hair in protective styles such as locs, braids and twists, to protect the hair from environmental factors such as humidity and promote hair growth.

“The point of the protection is that you’re not manipulating it,” Dyer said. “Obviously people wear weaves as a protective style … their hair underneath, it is growing.”

People get protective styles for different purposes; some want to protect their hair and grow it out while others like the look of the styles, Roberts added.

One of Roberts’ go-to styles is the braid out — defined curls which can be styled in many ways. To refresh her hair after a braid out, she rebraids the perimeter of her head and then with the hair left in the middle, she will tie in a “pineapple”— a loose, high ponytail — with a scrunchie.

Protective coverings such as scarves, bonnets, durags and silk and satin pillowcases also protect natural hair from friction, reduce frizz and retain moisture during activity such as sleep.

Because protective styles can last for weeks — and in some cases, months — some students have found they’re perfect for the busy college life.

Sophmore psychology major Nana Buachie learned to braid her own hair because she does not have access to a private bathroom in her dorm, which makes it more difficult to do her hair every day.

Buachie, who also enjoys sporting soft locs and Senegalese twists, said although there’s a style element to it, protective styling is also a matter of necessity and culture.

“What makes people more upset [about cultural appropriation] is because when the people who started it in the first place were doing it initially, it was considered other things like ‘ratchet,’ … ‘not stylish,’” she added.

Sometimes people don’t understand the context of protective styling, and there can be a stereotype that people with natural hair change up their hair all the time, Buachie said.

“Sometimes it also limits certain hairstyles that I want to try because I think [people are] gonna be like, ‘Oh, another new hairstyle,’ or something like that,” she said.

When people make comments to someone with natural hair when they change their hairstyle, a lot of the time, it’s not just about hair, Dyer said.

Skin color and hair often get conflated, she added.

Once, Roberts went to an event at another university where she had been invited to participate in a talk. Roberts wore her hair in a slicked back bun. Someone who recognized her from her professional website, where she has a picture of her wearing her curly hair short, said, “She was surprised and … said, ‘Your hair is different.’”

Roberts said it’s different when it’s clearly a compliment, but she noticed a slight inflection in the lady’s voice as she added that she almost didn’t recognize Roberts.

“It can just be triggering,” Roberts said. “Because you’ve gotten so many microaggressions like, ‘Oh, you changed your hair. Oh, what kind of hairstyle is that?’”

“What they really are talking about is you being Black, and it’s not, ‘Wow, your hair is different,’” Dyer said.

These microaggressions can sometimes cross the line into personal boundaries. Some students have had their hair touched without permission.

Vasquez, who will be graduating this summer with a degree in anthropology, said classmates would put pens and erasers in her hair when she was younger.

Sometimes the structure of an environment can also cause distress. Buachie was part of the JROTC in high school, and part of the uniform was for people with longer hair to wear it in a slicked back ponytail without flyaway hairs.

She said she spent hours preparing and blow drying her hair, but it would not pass inspection at the end of the day.

“I was hoping some sort of higher [ranked] person would be able to recognize that fact that my hairs were not meant to be like that,” she said.

Other aspects of the curly hair journey can involve personal growth. Daniela Orellana, who recently graduated with a degree in kinesiology, said she started paying attention to her hair after high school as a form of self care.

“I didn’t have a lot of self care [during high school]. Just because I had a very low self-esteem,” she said. Her confidence skyrocketed after she started to pay attention to herself and her hair by experimenting with products.

But navigating through all the layers of the natural hair journey doesn’t have to be done alone. There are communities on the campus, such as Maryland M.A.N.E.

The club’s mission is to bring awareness to how to take care of natural, healthy hair. They work with underrepresented groups in Prince George’s County who have their own product lines for natural, textured hair, said Jordan Cooper, Maryland M.A.N.E.’s treasurer.

“Everybody’s hair also reacts to different things differently. So what can work for one person may not work for you,” the junior journalism major added.

He said as the only man on the board, he wants to encourage Black men and other men of color to not shy away from hair care.

Another sense of community comes from the experience of getting hair done by a family member or friend.

Roberts vividly remembers sitting in the kitchen in between someone’s legs as they did her hair and the times when her mother cornrowed her hair as she sat on their porch.

“You kind of look forward to it because you just had all of these energies, different generations, depending on who’s doing your hair,” she said. “That collective experience, the smells, the sound, the sizzling of the hot comb, all those collected sounds … All of those things are just the collection of the hair experience.”

Vasquez said ever since she went natural, her identity was reassured.

Gabby Vasquez on the importance of hair to identity
Please support our journalism by donating to The Diamondback.
Categories:
Tagged: