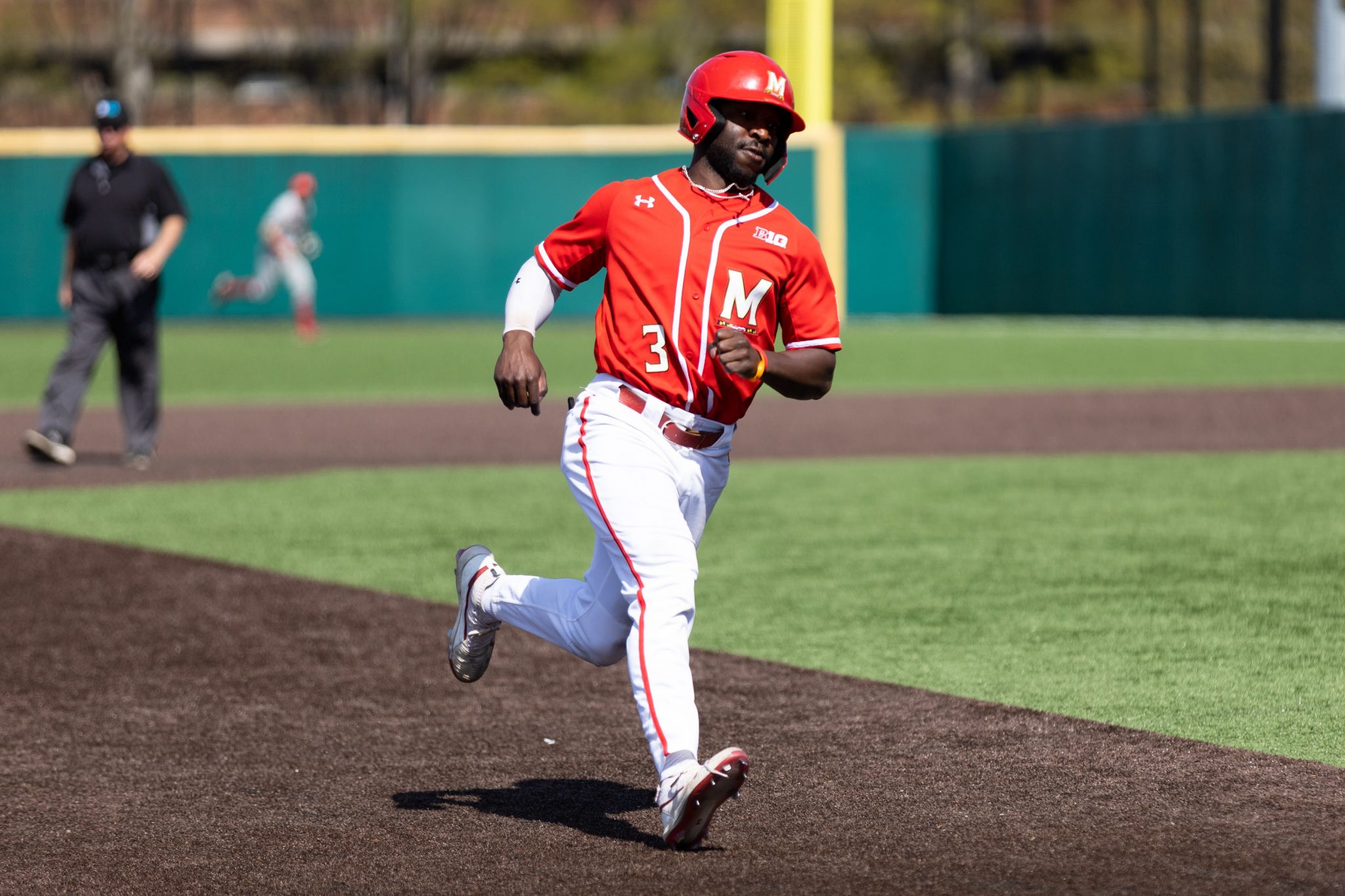 Not too long ago, Chris Alleyne had doubts about whether he would return as Maryland baseball’s captain. Major League Baseball passed him up in its draft, but pro baseball still could’ve called.

The option came and went; Alleyne chose to stay for a fifth year with Maryland. As a team, the Terps have thrived in the center-fielder’s final season. Individually, Alleyne has soared, and has wholeheartedly validated his choice.

Alleyne’s individual effort came to a milestone today as he became the first player in Division I baseball to slug 20 homers and swipe 20 bases in a single season since 2018.

His 20th homer, a three-RBI slug, helped drive Maryland home early as they ousted Purdue, 14-7, suppressing a late comeback from the Boilermakers and taking a step closer to the Big Ten regular season title.

With the win, the Terps broke the all-time single-season wins mark set by the 2014 Maryland squad which needed to advance to a super-regional to land the record.

Purdue may have wanted to be the formidable opponent that stalled Maryland baseball from a Big Ten title, but the Boilermakers didn’t appear ready to play the role early.

After a solid opening inning from the Terps — featuring an early sac fly that snatched a one-run lead and Jason Savacool striking out the side — Purdue needed a response.

The Boilermakers just weren’t ready to make one. On a 0-2 count for Bobby Zmarzlak, a third strike skipped away from Steve Ramirez to allow Zmarzlak to take his base.

Then Purdue made it worse. Kevin Keister came up behind Zmarzlak and chopped a ball off the ground toward Boilermakers’ pitcher Logan Danzeisen, who then tossed it to second for an attempt to turn two outs.

He missed the mark. The pitcher’s throw sailed high, forcing Purdue’s shortstop to leap high and over second base. The added action made it impossible to get Keister out at first, completing the botched play. Still, it looked to be recoverable with one out.

But against a Maryland baseball team that has been scorching hot at the plate recently, it proved fatal.

After a Luke Shliger RBI double, Alleyne enforced the Terps’ dominance, throttling a pitch into the Boilermakers’ bullpen in left for a statement three-RBI shot. The weathered center-fielder finished with three hits, one walk and three stolen bags on his stand-out day.

Firmly in rhythm, Maryland continued to pour in runs.

Scoring came in steady bursts. Zmarzlak slapped a two-run shot in the third frame, while Matt Shaw and Troy Schreffler nudged RBI singles along with a sac fly from Max Costes in the fourth. Freshman Ian Petrutz slugged a two-RBI shot to make it 10-0 in the fifth.

Savacool dealt steadily and made the scoring spurts mean that much more. The sophomore stifled the Boilermakers through most of the game, not relenting until a three-run burst from Purdue in the seventh ensured a reliever took his place for the eighth.

The scoring spurt chipped a little into Maryland’s lead, but the Terps still carried a formidable advantage into the eighth. But Purdue took advantage of Savacool’s absence.

The Boilermakers jumped reliever Ryan Van Buren for several hits including a three-RBI homer to draw closer to the Terps. The rally just fell too little, too late, and Maryland snatched its record-setting 43rd win.