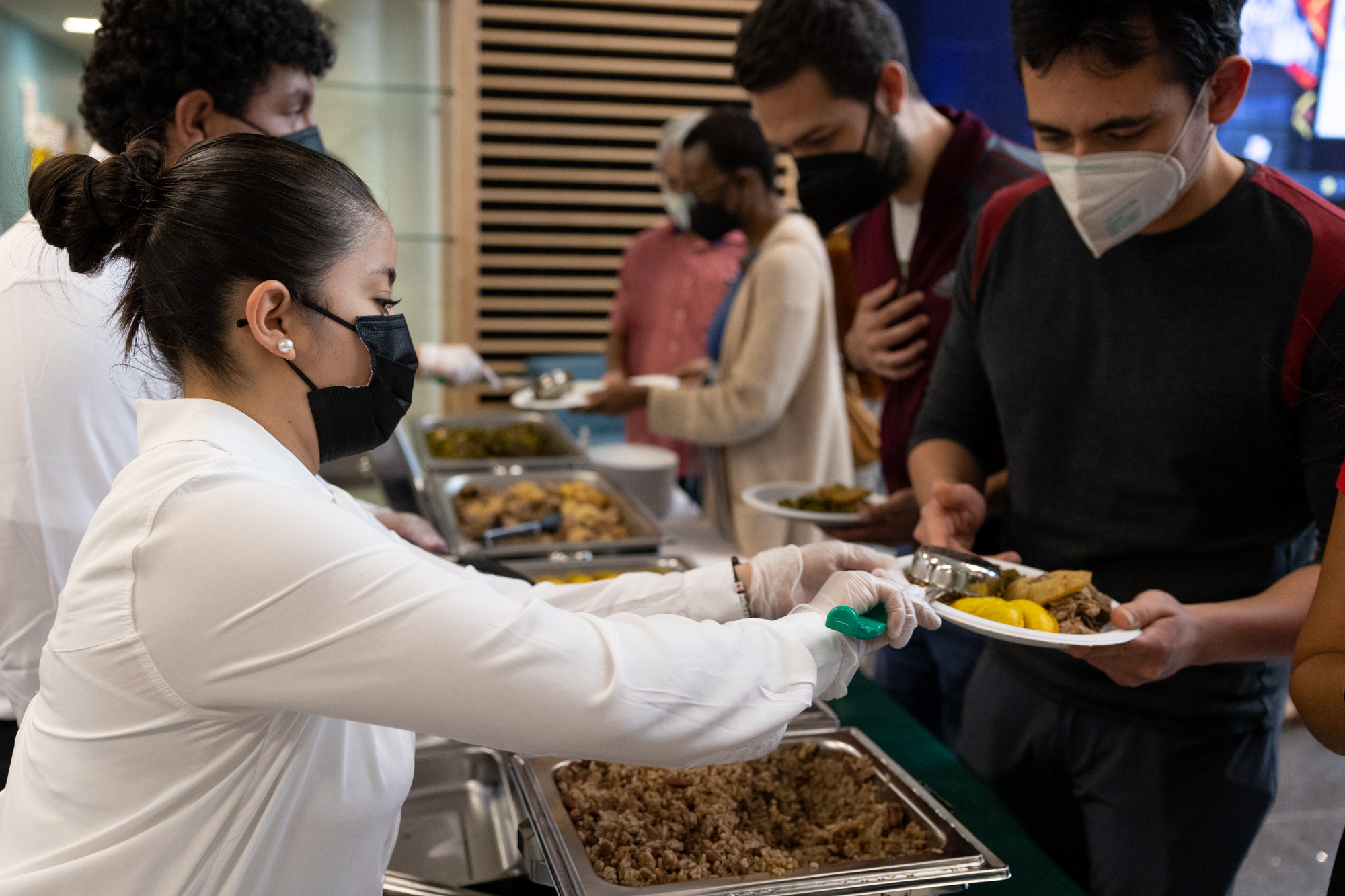 Attendees enjoy Caribbean cuisine during the closing ceremony of Caribbean Week, put on by the Latin American and Caribbean Studies Center on April 21, 2022. (Cam Andrews/The Diamondback)

The University of Maryland’s Latin American and Caribbean Studies Center hosted its inaugural Caribbean Week celebration from April 18 to April 22 to bring recognition to the Caribbean community on campus through a series of panels and events.

Events were hosted through in-person and virtual formats and centered on the research of Caribbean art, history, politics and culture. Multiple panels partnered with guest speakers from other universities and groups on and off campus.

The week-long celebration was a way for the center to raise awareness and foster inclusivity for the intersectional identities within the Latin American population.

Eric Tomalá, the center’s assistant director, said the change is part of an effort to accurately represent the communities they support.

“The Caribbean, it’s very diverse,” Tomalá said. “Some communities don’t feel that they should be called Latin American.”

The department hopes the week will show the university and surrounding community that there are many resources the center provides for the Latin American and Caribbean communities.

“We are very interdisciplinary … our small but very active department brings outstanding scholars that do outstanding research,” Tomalá said. “It also provides space for communities, particularly students of color, who don’t necessarily have an opportunity to visit campus to learn about the services … and what the University of Maryland can offer to them.”

The week kicked off with a virtual panel moderated by Danielle LaPlace, an intern for the center and graduate student in the women, gender, and sexuality studies department.

The panel addressed healthcare in the Caribbean, specifically surrounding HIV and AIDS. It highlighted the research of Dr. Thurka Sangaramoorthy, an associate professor of anthropology at this university, and Dr. Jallicia Jolly, an assistant professor in American studies and Black studies at Amherst College.

A music showcase took place after the panel and spotlighted the Cultural Academy for Excellence, “a youth-based program which uses the visual and performing arts as the catalyst to develop passion and discipline for learning, leadership, and academic achievement,” according to the Caribbean Week website. The students played steelpan drums and told the audience about the instrument’s history and cultural origin.

For LaPlace, a native of the Caribbean country St. Kitts and Nevis, Caribbean Week was something she had a personal connection to. With the COVID-19 pandemic interrupting the beginning of her time in the graduate program, she felt that this week enabled her to foster stronger relationships within the Caribbean community at this university.

Dr. Danielle Clealand, an associate professor at the University of Texas at Austin, led a panel on Friday that addressed the nature of Black politics in Latin America.

Clealand explained that the Latin American community has a history of not identifying as Black as a racial category, despite the presence of Black and Afro-Latino people, but often identifies with the Black community politically.

“Racial categories and skin tone need to be looked at together to really kind of understand,” Clealand said. “A lot of times when people identify as Black, it’s in a more political sense because if we understand race in Latin America, we know that there’s often a distancing from the traditional category of Black.”

The week culminated in a closing ceremony at the H.J. Patterson building on Friday afternoon. Students and faculty gathered to reflect on the week, honor student accomplishments and award the first Merle Collins scholarship, named after the previous Latin American and Caribbean Studies Center director who retired last year.

Isabella Alcañiz, current director of the center and an associate professor in the government and politics department, said she hopes Caribbean Week will be recognized every spring and will continue to grow and establish the center’s community presence on campus.

“To institutionalize it and make sure that once I’m no longer here … that this continues to happen, that’s a key goal,” Alcañiz said.