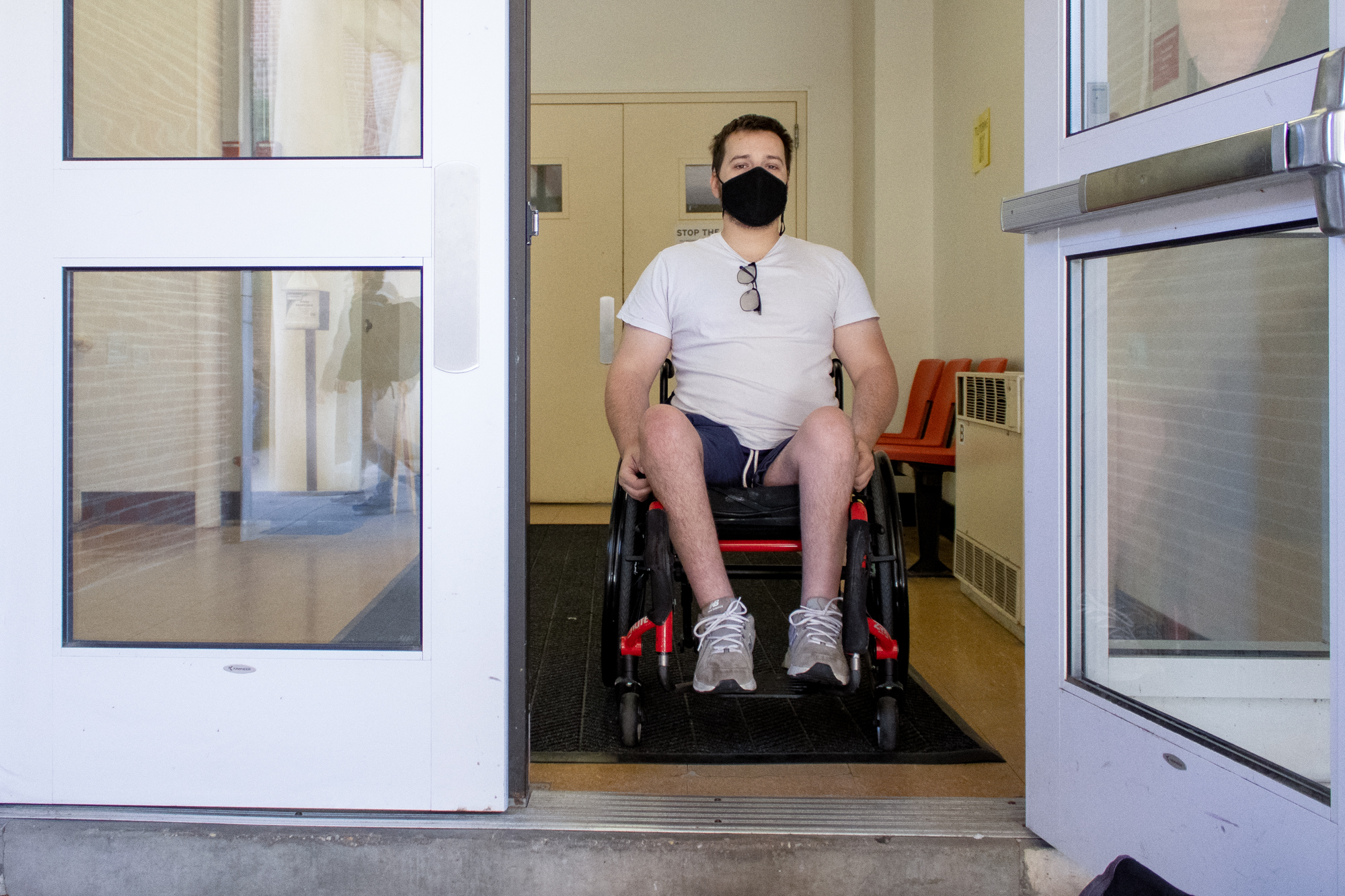 Luke Perry, a senior Computer Science major, pictured at one of the entrances of the William E. Kirwan Hall on Monday, April 11. The entrance is inaccessible for wheelchair users, as there is a steep step below the door. (Jordyn Salow/The Diamondback)

Senior Luke Perry describes the University of Maryland’s campus as “one giant hill.”

As a wheelchair user, the hills scattered around the campus tend to be inconvenient at best and impossible to navigate at worst. Perry, a computer science major, attempted to wheel around campus his first year after transferring to this university but found it extremely difficult — even wheeling to get a meal at the South Campus Dining Hall was an exhausting ordeal.

For many students with disabilities at this university, getting around the campus can be arduous, particularly because of hills, bumpy sidewalks and construction. As a result, some have opted for alternate modes of transportation — and those systems are far from perfect, too.

“It’s kind of like accessibility is just an afterthought,” Perry said. “A lot of people just … aren’t aware of these things.”

Carolyn Fink, director of this university’s disabilities studies minor, emphasizes the importance of universal design, which puts accessibility at the forefront of design concepts in the classes she teaches.

Many campus buildings were built well before the Americans with Disabilities Act of 1990, when accessibility was an “add-on” and not something designers actively kept in mind, she said.

“If you make a reasonable design choice, then it benefits everybody, not just people with disabilities,” Fink said.

Buildings that predate the ADA often require retrofitting, Fink said. But hills, Fink noted, are something the university can’t change, which is why paratransit and public transportation are vital.

Reagan White, a senior microbiology major, elected not to bring her wheelchair to campus because of how difficult she believed it would be to get around. She’s an ambulatory wheelchair user and can walk around, but doing so can cause physical stress.

“It’s about a million times more difficult to wheel yourself up a hill than it is to walk,” White said. “And so I was like, ‘This just isn’t going to work.’”

Because of her decision, White has to take much more time out of her day to recover from walking around — time she could be using to work on schoolwork or be social around the campus, she said.

White knows the bus system like the back of her hand to minimize the amount of time she spends walking. To avoid Stamp Hill, she gets off of the bus at Regents Drive, takes the elevator up Regents Drive Garage and walks across the bridge to the Plant Sciences building. From there, a right turn and a short stroll straight past the Biology-Psychology building lands her at the bottom of Stamp Student Union.

But cuts to certain bus routes have left White standing around for up to 20 minutes, she recalls. For her, that’s especially egregious, because her heart condition can cause her to pass out if she stands for too long. She thinks a stronger public transportation system would help the campus become much more accessible.

“That’s the easiest way to increase accessibility without putting the burden of accessibility on your disabled students,” she said.

White has tried to use the university’s paratransit services but feels the service isn’t adequate for social purposes because rides need to be scheduled in advance.

Shuttle-UM runs up to five paratransit vans at a time, providing an average of 130 rides per week when the university is in session, according to a statement from university spokespeople.

Perry, who now prefers to use a car with hand controls, previously took advantage of both paratransit services and public transportation. He’s found Shuttle-UM bus drivers are very accommodating and are more knowledgeable than other public transportation drivers about securing wheelchairs.

Construction can also be a barrier to getting around the campus comfortably. Noah Hanssen, a junior public policy major, said construction often cuts off sidewalks that are necessary for getting to classes, causing him to seek alternative, sometimes longer routes.

“There are definitely places around here where … my routes to get to a class [are] limited,” he said. “A lot of it is just the issue of how hilly campus is, and there aren’t very many ways around it.”

Perry has also rerouted his commutes across the campus because of unexpected sidewalk closures due to construction. But aside from creating a barrier to travel around the campus, construction and a lack of sidewalk maintenance can also be dangerous, Perry pointed out. He’s fallen out of his wheelchair multiple times because of bumps on sidewalks, he said.

“The cracks in the sidewalk between the slabs of concrete are sometimes really uneven, and it’s really easy to catch an edge on one of the little front caster wheels on my wheelchair and fall out,” he said.

The university is taking some steps toward making sure people with disabilities on campus can report inconveniences and inaccessible spaces due to construction, said Georgina Dodge, the diversity and inclusion vice president at this university.

Since March, Facilities Management has been placing signs on areas under construction that list a point of contact to report barriers, she noted. Facilities Management works closely with Accessibility and Disability Services and other services across campus to notify the community of all planned sidewalk, pathway and egress closures, according to a university statement.

Despite some efforts to improve accessibility on campus, Hanssen thinks the university needs to be more proactive and rely less on students with disabilities to advocate for accessible spaces.

“I feel like they probably don’t think about having people with disabilities on their campus very much,” he said. “I don’t think that they do enough.”

Victoria Stavish contributed to this report.