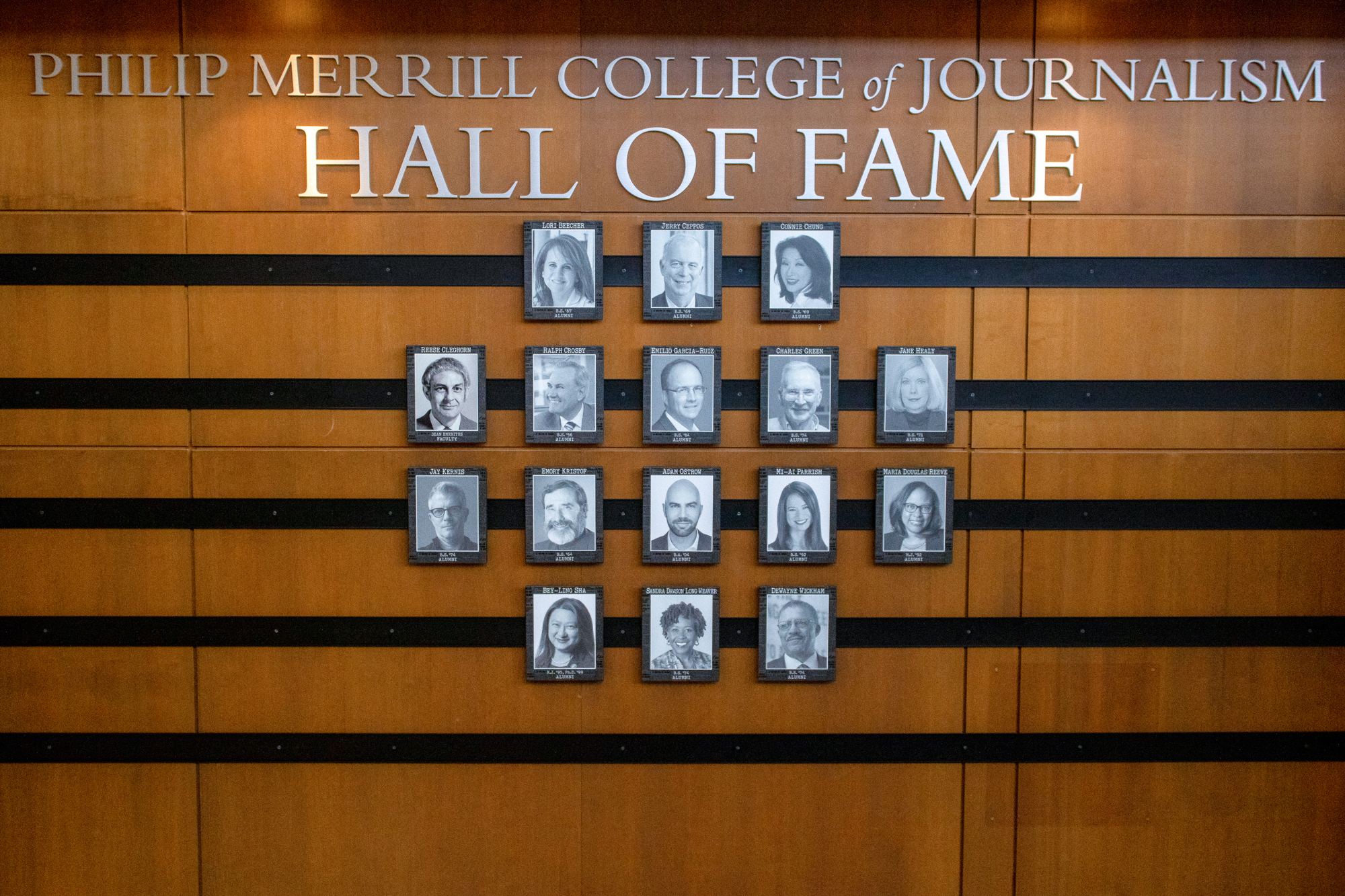 “Some people know at an early age they want to be a journalist. I wasn’t one of those people,” veteran, award-winning journalist Charles Green told a laughing audience as he accepted the latest honor of his prolific career: an induction into the University of Maryland’s journalism college’s Alumni Hall of Fame.

Green was the first of 16 inductees to receive a commemorative plaque during a ceremony at Knight Hall Thursday evening to honor the journalism college’s accomplished and talented graduates.

Alumni took turns reflecting on their achievements and reminiscing on their beginnings at the journalism college.

“It was my mother who gently suggested to me after my sophomore year that I might want to consider a journalism major,” said Green, a graduate of the class of 1974. “The first instinct of a 19-year-old isn’t necessarily to take career advice from your mother, but I’m glad I did.”

Inductee Bey-Ling Sha (M.J. ’95, Ph.D. ’99) who got her doctorate in public relations from the journalism college before the program was moved to its current home in the college of arts and humanities, acknowledged the impact alumni like Connie Chung had on her life.

[UMD will no longer host winter commencement, effective next semester]

“I grew up in Houston in a family of voluntary immigrants to the U.S. where the acceptable answers to, ‘What are you studying in college,’ were pre-med, pre-law or engineering, in that order,” Sha said. “When I finally confessed my college major was not going to be civil engineering but communications, all the uncles and aunties in the family and community surprised me because they just nodded and said, ‘Oh! Like Connie Chung?’”

“I am so proud to not be the first Asian American woman in this Hall of Fame,” Sha said.

Honoree Sandra Dawson Long Weaver (B.S. ’74) described how her desire to be a journalist started when she cut class in her senior year of high school to hear author Alex Haley speak at Anne Arundel Community College. She used her notes from the event to produce a story that ended up on the front page of the high school newspaper.

“There was nothing like that feeling of having a front page story, my mother clipped it out and hung it on the refrigerator, it fell apart and hung there for years and that became my passion,” Weaver said.

At the journalism college, Weaver joined The Black Explosion — a student newspaper with a focus on Black student life and issues on the campus — before graduating and beginning a 47-year-long career at The News Journal, The Evening Bulletin in Philadelphia and The Tennessee Tribune. She was the first Black woman to serve as managing editor of The Philadelphia Inquirer and led a team that was a Pulitzer finalist in 1992.

Inductee Emilio Garcia-Ruiz (B.S. ’84) described himself as “one of those lucky kids who always knew what he wanted to be.” Having grown up in Bethesda, he heard about the journalism college and the reputation of its independent student newspaper, The Diamondback.

“It was there that I caught the journalism bug and developed a very nasty competitive streak as well as terrible eating habits that continue to this day,” Garcia-Ruiz said. “Back then, The Diamondback editors would berate any student reporter who got beaten by the Baltimore Sun or The Washington Post — we were supposed to be better.”

Staff and alumni also remembered the legacy of the late Reese Cleghorn who died in 2009 after serving as the journalism college’s dean emeritus from 1981 until 2000, during which he expanded student diversity and led the school to national prominence.

“Dad loved being the dean, and that’s even what we called him at home,” said Rev. John Cleghorn in a video tribute to his father. “It was Maryland that called dad and charged him with the task, the vision and the dream of building a great school of journalism.”

While receiving her award, fellow inductee Maria Douglas Reeve (M.J. ’92) narrated how much Dean Cleghorn enjoyed spending time with students and how the journalism college prepared her for more than 30 years in newsroom leadership. Reeve went on to become the first person of color to be named executive editor at the Houston Chronicle in 2021.

“We were out at some event with students and faculty and Dean Cleghorn was with us … I said we’re going drinking, you wanna come? So he came with us,” Reeve said. “He hung out with us and after that, I’m not sure if he knew this, but his nickname within the group was ‘Reesebaby.’”

The Hall of Fame project was made possible with the support of alum Ralph Crosby (’56) who started his journalism career at The Diamondback. Crosby’s career spans local newspapers and the White House before starting his own public relations firm.

“I’ve been lucky and that’s what has allowed me to give back financially to the university. But everything was based on my journalism career, my ability to write, strategize and understand how the world works,” Crosby said. “I did a lot of things in college but my experience on The Diamondback was probably the most rewarding.”