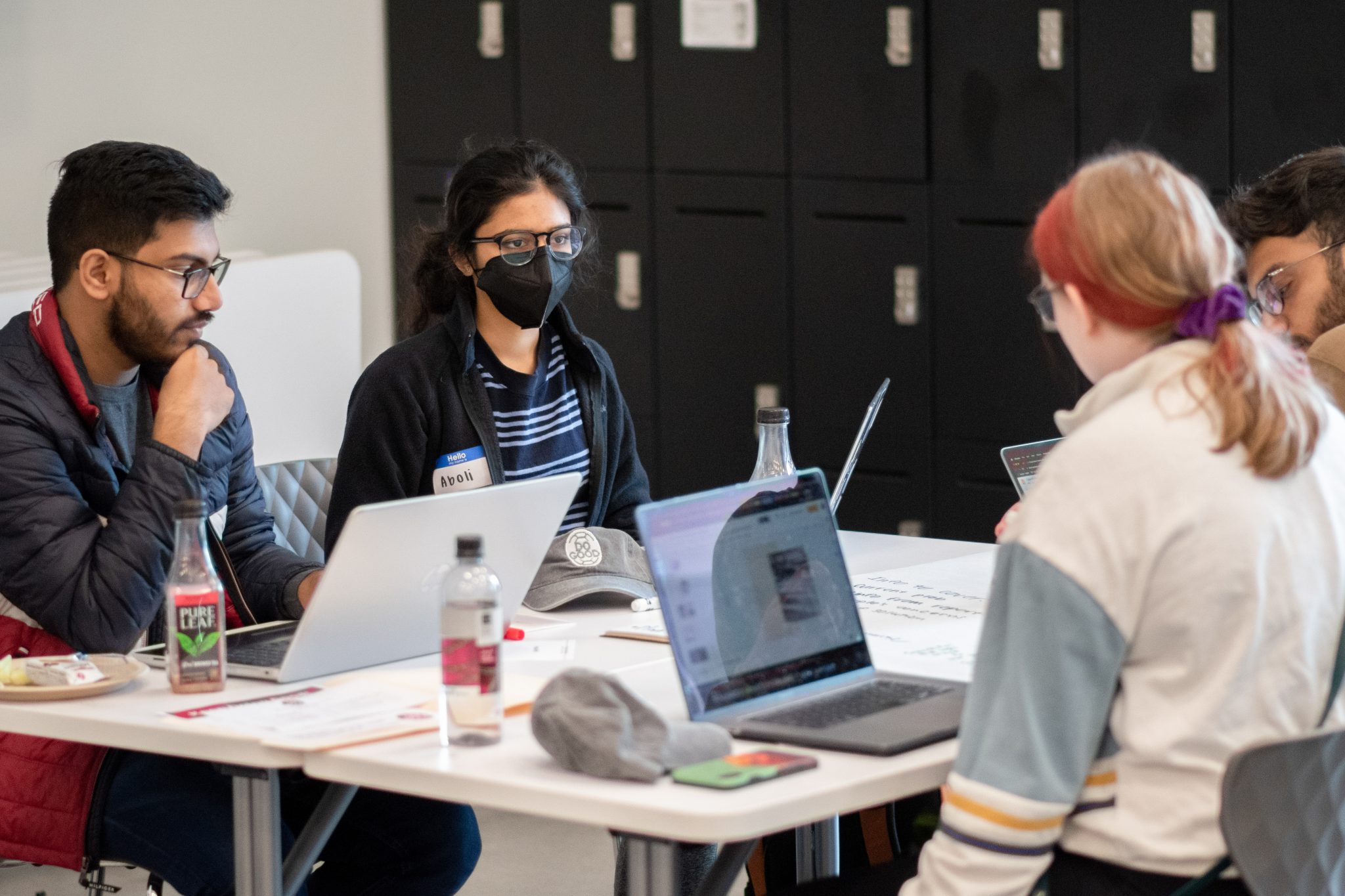 Student teams work on their project ideas and presentations during the Do Good Impact-A-Thon on April 9, 2022. (Autumn Hengen/The Diamondback)

By Anna Harmon
For The Diamondback

Resembling a hackathon, each participating group was given a hypothetical $100,000 and a general social issue. They had an hour and a half to create a pitch for a solution.

Every year, students in the institute’s ambassador program come up with events or challenges to hold at the Do Good Accelerator, located behind The Hotel in this university’s Discovery District. This year’s Impact-A-Thon was inspired by an event created by Megan Masterson called “Save the World In Seven Minutes,” a critical thinking exercise given to students involved in various Do Good programs.

“[The challenge] is really about giving students the chance to think creatively and collaboratively, and radically brainstorm solutions to issues that their local community is facing,” said junior public health science major Isha Yardi, a co-leader of the institute’s ambassador program.

At 9 a.m., participants began filing into the event space where they were met with apparel and morning snacks. The ambassadors — students in the institute who spearheaded the challenge — welcomed the participants with enthusiasm.

After settling in, the groups were given a rundown of the event where they were told about the competition’s goal and time constraints.

In the design stage, groups worked together to research their topics: Mental health and housing and food insecurity. The participants wrote down ideas to build a general framework for their approach.

As the clock ran down, groups scrambled to finalize their presentations.

“The most challenging part was really having the time to think in-depth about this issue … In the beginning, we had a lot of trouble picking one thing to focus on but we eventually figured it out and tried to incorporate as much as we could in the time constraint we had,” said sophomore immersive media design major Grace Orellana, a participant in the challenge.

Megan Masterson, Lynn-Marie Edwards and Cali Moore were the judges. After a brief introduction from each of the judges, the final stage of the competition commenced. Each group had five minutes to present their issue.

The first group targeted mental health on campus as their specific issue and presented a website as the solution, which would provide a free diagnostic and a provision of personalized resources.

When asked about continuing to build on her ideas through a Do Good program, participant Serena Kemp expressed enthusiasm.

“I already spend 16 hours a week, minimum most times, working with mental health on campus,” the junior psychology major said. “Helping out more and finding a more sustainable action that’s specific … would definitely be interesting to me.”

The second group targeted food insecurity on campus and offered an app as the solution that would provide a pantry inventory and a connection platform among other resources.

The end of each presentation was met with applause from around the room. The judges expressed their approval of each group, handing out compliments and suggestions to the participants.

Lynn-Marie Edwards, a public management graduate student ambassador and one of the judges for the challenge, felt inspired after the conclusion of the event.

“The students come up with such interesting ideas and it inspires me, like the presentations today,” Edwards said. “I’m encouraging them to really take this somewhere further so that it could actually have an impact on campus. I learned a lot from them.”

The hope for many of the staff at the Do Good Institute is that challenges like these will inspire students to take action and bring their ideas to fruition.

“A lot of people think that ’doing good’ means doing this big thing and really making a huge impact, but my time with Do Good has taught me that even the smallest change that you’re able to make is doing good in some way,” Yardi said.