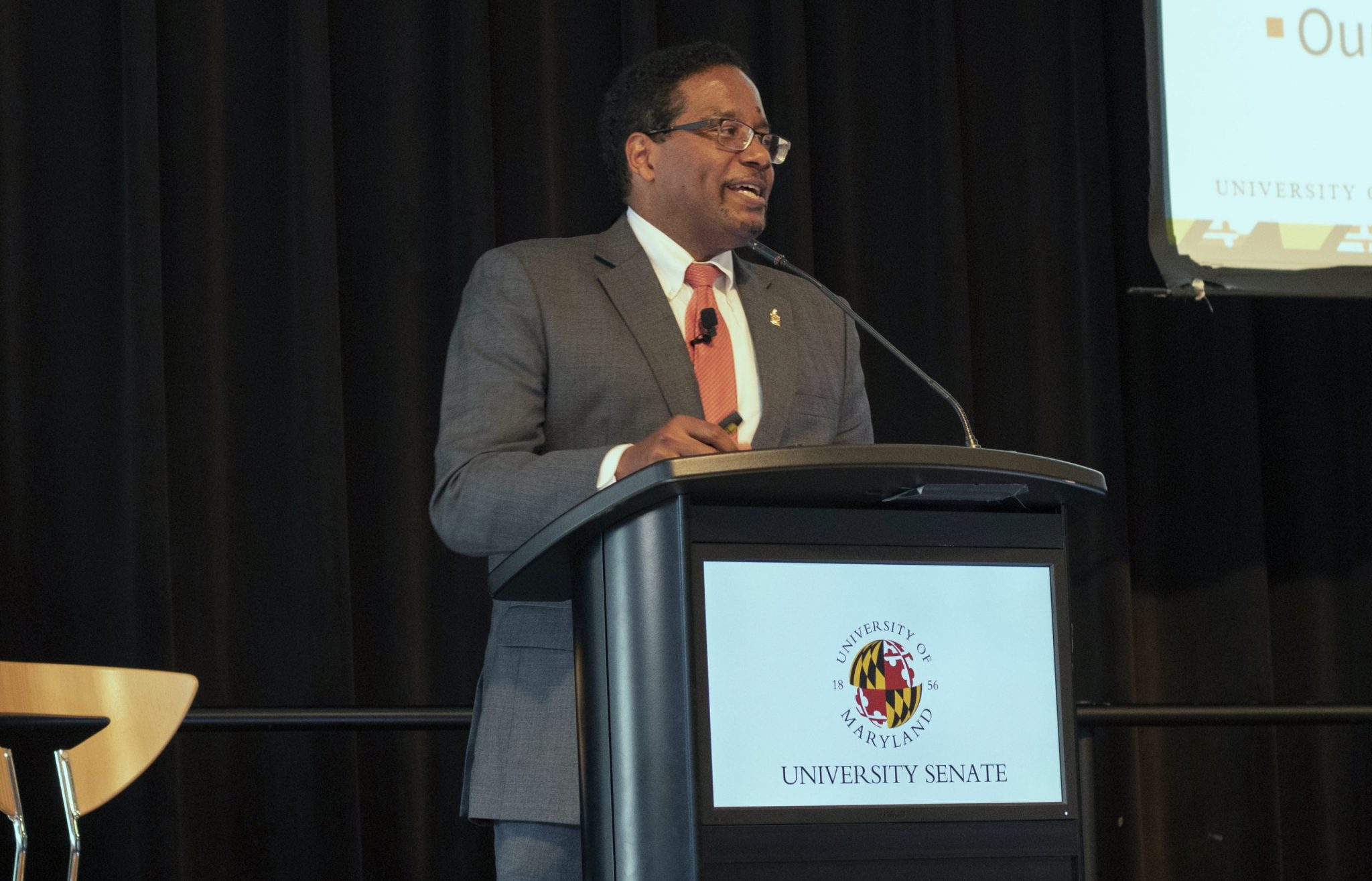 President Darryll Pines gives his State of the Campus address at the University Senate meeting in the Colony Ballroom of Stamp Student Union on March 1, 2022. (Daryl Perry/The Diamondback)

President Darryll Pines emphasized improving this university’s standing as a research institution and announced new campus initiatives and facilities in his State of the Campus Address during a University Senate meeting held on Tuesday.

Pines celebrated the university’s achievements as a research institution but said it could be improved considering the school’s proximity to a funding hotspot.

“We’re not leveraging our competitive-advantage, which is our strategic location,” Pines said.

Over one-fourth of federal research funds were directed toward California and Maryland in FY2019, according to data from the National Science Foundation’s National Center for Science and Engineering Statistics.

The university ranked 16th in NSF Higher Education Research and Development Expenditures in FY 2020 and 10th overall for public universities.

The war between Russia and Ukraine was also a key point in Pines’ presentation. He said this university and other Big Ten schools are working to bring Ukrainian students to their universities. The universities sent a letter to the Department of Homeland Security regarding the matter.

Pines gave updates on the TerrapinSTRONG program, a diversity and inclusion training required as part of the onboarding process for all faculty, staff and students.

The TerrapinSTRONG program has over 15,000 enrollments, and over 13,000 people have completed it since its inception in the 2020 fall semester, according to the university president.

He announced the search for deans for the arts and humanities, behavioral and social sciences and education colleges, which will be headed by the dean of the Philip Merrill College of Journalism school, Lucy Dalglish.

He highlighted the launch of the new Brins Mathematics Research Center, Quantum National Laboratory, and Applied Research Laboratory for Intelligence and Security.

The university president also provided statistics on the incoming student body, a theme also spotlighted in his previous State of the Campus address.

In his address, Pines also shared the percentages of both in-state and out-of-student new student applications during the early action stage rose by 0.4 percent and 16.4 percent respectively for an 11.8 percent overall increase from last year.

The percentages of in and out-of-state admits also dropped by 3.7 percent and 2.5 percent respectively, causing an overall 2.9 percent decrease in admits overall.

The university continued the trend of receiving an increased number of applicants, but admitting a lower percentage of them each year.

Pines highlighted Steven Jin and Naveen Raman, two students named 2022 Churchill Scholars. He also recognized seven alumni featured in Forbes’ 2022 “30 under 30” list, the highest number in this university’s history who made the list, which he attributed to the experiential learning they received here.

Pines said he felt happy about the university’s standing and had high hopes of continued achievement.

“Our future, if you don’t believe it, is very, very bright,” Pines said.