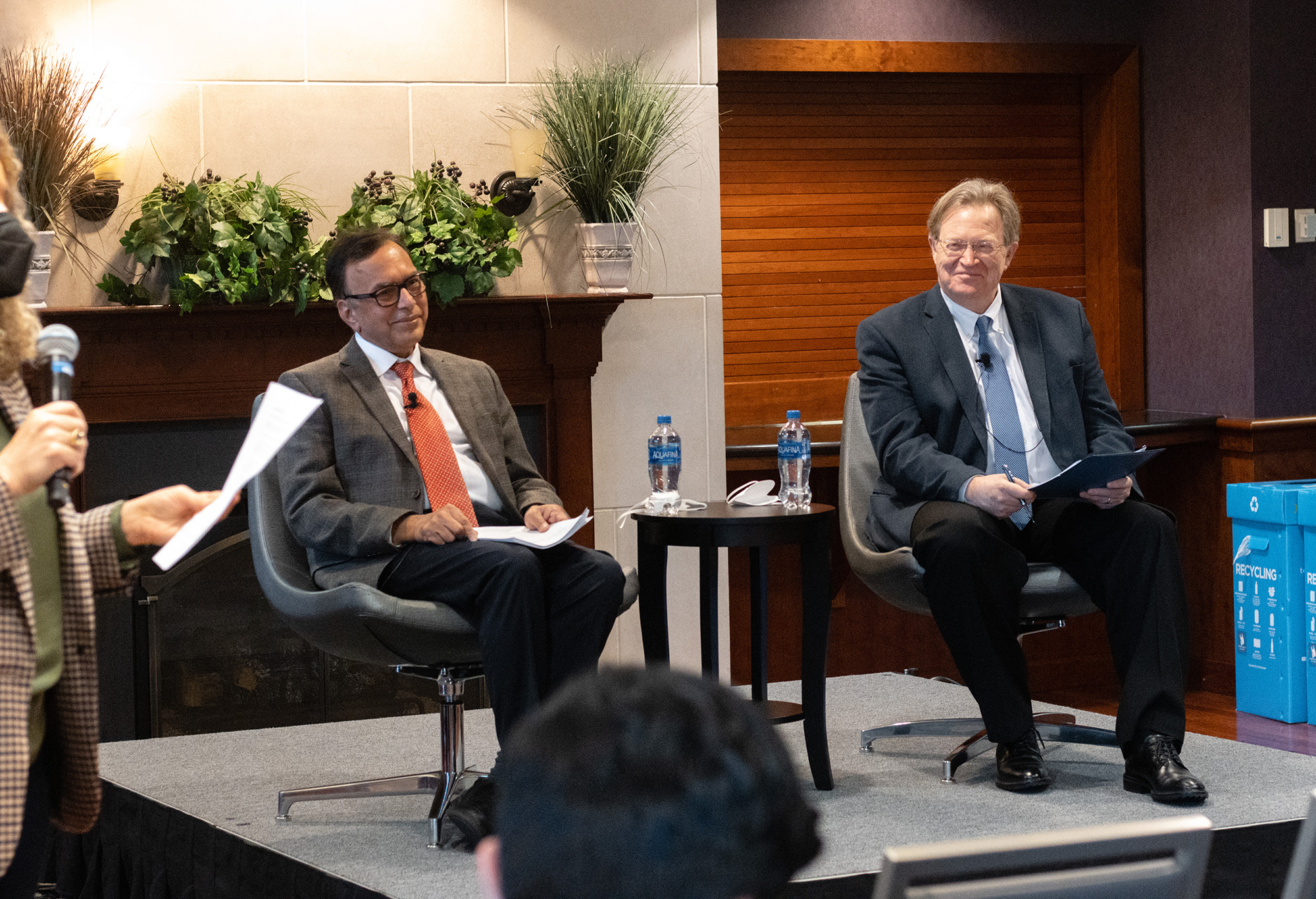 Kislaya Prasad (left), the academic director at the Center for Global Business, during the Promise and Peril event on Tuesday, Feb. 15, 2022 in Van Munching Hall. (Kurt Leinemann/The Diamondback)

The University of Maryland business school hosted a discussion Tuesday as part of its distinguished speakers in international business series, dissecting global trends predicted to shape the global operating environment from 2021 through 2026.

The hybrid session was hosted by professor Kislaya Prasad, the university’s global business center academic director, and featured Erik Peterson, the managing director of Kearney Global Business Policy Council. The presenters delved into the findings of their latest report, titled “Promise and Peril.”

“If you stand at the vantage point today you see a world of discord and uncertainty, tumultuous times you might say, but at the same time you also see glimmers of promise,” Prasad said. “It’s an interesting time where you can think of things could go in either direction.”

The report predicts the race for quantum supremacy between the U.S and China will intensify over the next five years as “large businesses are seeking to deploy commercial quantum capabilities by 2025” with the global market for quantum technology expected to exceed $31 billion in 2026.

“IonQ, the company you referenced in your report, one of the companies, is based here in College Park, and quantum is close to the university’s heart right now,” Prasad said, referring to Maryland-based company IonQ that aims to achieve “broad quantum advantage” by 2025.

The U.S is behind China in developing quantum communication and cryptography, two crucial subsets of the quantum industry. The report forecasts that the U.S and Japan are likely to form a “quantum alliance” to compete with China’s quantum ambitions amid increased domestic investments by other countries including Germany, France, Canada, Netherlands, Russia and India.

Although it is unclear which nation will emerge first in the quantum race, the report says those that do will “benefit from the ability to set standards across the quantum tech value chain.”

“I hope the University of Maryland wins the whole thing,” Peterson said, jokingly.

The report went on to forecast a rise in water dislocations exacerbated by climate change causing freshwater shortages that could lead to higher food prices and cost the global economy up to $1.6 trillion in the next five years, affecting consumers and companies alike.

Water shortages are predicted to increase the cost of producing energy and technological products within the next five years. Facilities manufacturing semiconductors use up to 4 million gallons of water a day, while data centers use up to 5 million gallons a day to cool operations, roughly equivalent to the water used by 50,000 people, the report estimates.

As the water grows more scarce, the Kearney report predicts consumers will become more aware of their water consumption and of the businesses they patronize, leading to proliferation of water specific metrics and rapid innovations in agricultural technology.

“Pricing water has always been an issue, too,” Peterson said. “But anyway right now, we think this might be a tipping point if you look at the prospect for conflict over water, the Nile river and some of the damming going on the Tigris-Euphrates.”

The report went on to predict an escalation in ungovernability and political polarization that if unchecked could reach a boiling point by 2026, spilling over into economic upheaval, war or even anarchy.

“There are more and more factions within societies and economies that are unwilling to go along with the dictates of whatever authority structures in place,” Peterson said. “Across the world, governments are going to have to face down public opposition no matter what they do to respond to the pandemic.”

Amid reduced trust in government, the report predicts populations will place more pressure on companies to diffuse tensions by addressing misinformation — for example when Coca-Cola faced public backlash for not initially speaking out against Georgia voting restrictions.

“There is a shift in terms of people looking to companies rather than the government for leadership,” Peterson said. “On one hand, it represents promise, on another peril. It’s really tough for a lot of companies that aren’t trained or even geared in terms of their corporate culture to think about broader macro-leadership issues under these circumstances.”

Amid all these predicted disruptions, the panel advised students seeking jobs and internships to focus on building skills and careers that will not be overtaken by technology come 2026.

“When students are thinking of what jobs they’ll take, they are asking, ‘What is it that will not get destroyed by artificial intelligence?’” Prasad said. “You don’t want to spend your time and effort investing and developing a skill that 5 years down the road A.I will do.”

CORRECTION: A previous version of this story’s photo caption misidentified Kislaya Prasad, the global business center’s academic director. The caption has been updated.